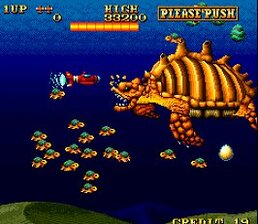 
​
+ Large and detailed sprites, 2-player co-op, unique theme for the genre (dinosaurs), good animation and effects (some multi-jointed sprites like in Treasure games, some enemies explode into smaller pieces when they die), sometimes interactive environment, intense action, difficulty options, one controllable gun pod (its weapon changes depending on the angle you set it to and there's four levels of upgrades (last level is rare and has a time limit), also blocks shots but can be destroyed by the enemy), nice level and boss introductions, good bosses overall, mini-bosses, decent variation

+/- Respawn on the spot without upgrades (even after using a credit), bumping into walls doesn't kill you, unlimited continues via credit feed, there's a smart bomb but it's very rare and triggers five seconds after picking it up, somewhat forgiving hit detection

- Need power ups to gain speed (resets after death), slow auto-fire, hard to recover after death after two levels or so, trial & error (boss patterns - first boss has a cheap entrance from behind, figuring out which weapon to use in which situation), the upgrades don't change your weapons that until the fourth level (which is on a time limit), can't cycle the pod in both directions (makes switching slower than wanted at times and they could've added one more button for this), easy final boss if you have good speed (it also re-uses the sprite from the title screen), repeats some enemies a lot