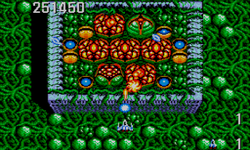 
+ Some great enemy designs, mini-bosses, well-sized weapons arsenal (8 wearpons with 3 levels each), frantic, respawn on the spot (with a no.1 special weapon - not enough later on), timed weapons (can't abuse the best ones), good sound effects, good length (6 long stages)

- Repetitive, no pacing (just waves upon waves of random enemies), slowdown, very similar to Zanac, some useless weapons, very hard to recover after dying from round 5 onwards, special weapons fly upwards after you shoot the containers (making it easy to miss them by shooting the containers right after they enter the screen), timed bosses (you'll have trouble killing some of them if you're not powered up)