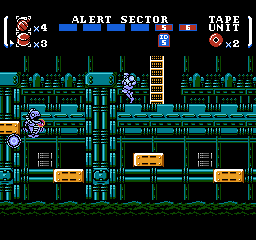 +/- The agents' sprites look almost identical to the player sprite (except for the female agent), no knockback on Normal, time limits (pretty forgiving on Normal), exploration based gameplay (need to find an agent in each level who'll give you an ID card that unlocks the boss room), you can move through a wall in sector 2 (skipping part of the path to the boss), can't shoot downwards while on a ladder, spikes kill instantly, instant off screen enemy respawning (makes backtracking and exploration more challenging but it can be tedious to kill the same enemies several times), enemies can't shoot through walls while you can (in the power suit), the suit is a bit overpowered

- Can't move while crouching (your character stands up and walks like in Contra), small delay when landing after falling from a certain height, non-interconnected levels (falling down to where there's a screen below kills you - even when dropping down from a ladder), no maps, no alternate main weapon, uneven spritework (so-so looking cutscenes overall), backtracking (pretty severe in sector 2), somewhat slow movement considering the running animation and you can't upgrade or get slide/dodge moves, some cheap hits (ambushing flying enemies, cheap placements around ladders and small platforms, etc.), some trial & error (finding your way around, boss patterns), can't speed up text or level completion scenes, easy sector 3-5 bosses, easy final area with some dead space