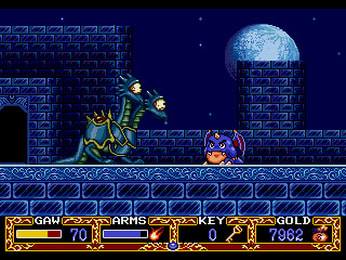 
​
+
Wonder Boy/Monster World-style gameplay (platform adventure, buy/sell gear, magic items, towns to visit etc)
Good dialogue overall (mostly good voice acting)
Memorable and fun characters (except for Gaw (his mannerisms get on your nerves) and Glug), humorous tone
Great anime cutscenes (skippable)
​3 different characters to play as (with different dialogue in some parts - increases replay value) which you can switch between on the fly
Decent assortment of weapons and items (some special timed items, varied weapons)
Some good bosses
Fast walking speed (not as Gaw)
Save feature (three slots, respawn at the beginning of the current room)
You can jump up and down ladders
Good length, you can move quickly between areas on the world map (can't go directly to a previously visited shop though which is annoying), one sidequest, all characters are useful at some point, good art direction, shows enemy and boss HP while you're attacking them, get to see your rank and hear some voice acting bloopers if you wait for a while after the ending (finish the game faster to hear more bloopers), good boss intro speeches overall,

-
Your avatar does an animation when standing at the edge of a platform that stops you from attacking and also turns you around towards the edge
Animation/delay from falling too far (see Kirby's Adventure)
Loose scrolling (you end up too close to the edge of the screen when walking which leads to more cheap hits)
Leaps of faith (you can't look up or down)
Cheap hits (enemies attacking from off screen)
Many dead ends in dungeons
Backtracking (fetch quests, getting out of the second area in the second to last fortress)
Some tedious parts (wind caves, slippery ice area, vertical platforming in dwarf shrine area, underwater maze, waiting for platforms in The second to last fortress areas, rock sentry boss, last two bosses too much HP while their patterns are simple)
Projectile weapons take doo damn long to charge up (you can use them for ~15 attacks then have to wait 10 seconds until a meter charges up)
Uneven difficulty (some boss battles turn into wars of attrition, some have obvious safe spots, most normal enemies are very dumb, enemies can sometimes be shot from slightly off screen, spike traps in the last fortress only do ~1 damage per hit)
​some grinding required, pretty long invincibility time on enemies (and they usually take several hits to kill - breaks gameplay flow), very short invincibility time on you (plus the knockback is pretty big and there's a delay on attacks until the animation finishes - frustrating when you die so quickly), inconsistent visual quality (cutscenes and portraits look a lot better than most in-game and shop clerk graphics - backgrounds and enemies tend to be colored in shades of grey and brown), somewhat lacking in hidden treasure (there is some but areas are mostly too large and empty later on), controls could've been mapped better (why have pause and options separately instead of letting C be something like the block move, a run move or quick item usage?), can't skip or speed up dialogue, can't pick up dropped money bags/herbs until they’ve fallen to the floor (breaks flow a bit at times), some dead space (area where you place the orbs), you can only buy/sell one item at a time in shops