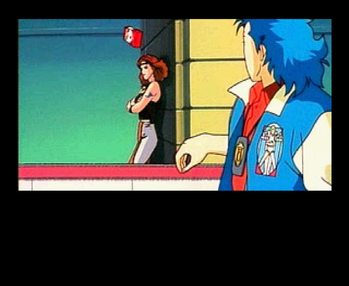 
​
​
​+
Cinematic (anime style) storytelling on part with Snatcher (MCD)
Save anywhere outside of combat (four slots with basic info), great art direction overall (the early 3D light gun and defusing segments+certain pieces of art and cutscenes and the flying robot enemies look pretty dated)
Fairly unique premise (for a game anyway - play an ex-astronaut police (policenaut) who was lost in "cold sleep"/frozen for 25 years after an accident during a space colony mission and now works as a private detective (this does make jonathan's relationship with his ex-wife kind of similar to the one in Snatcher though))
Tons of lore to read and various optional dialogue to flesh out parts of the setting and certain characters (Snatcher)
New content not in the PC-98 version (animated cutscenes added for important scenes, subtitles, a flashback cutscene showing Jonathan's accident before the opening cutscene (gives his situation more emotional impact than if you'd just read about it in-game in his office))
Better quality FMV than in the 3DO version (though it runs at 15 FPS here - in the Saturn version the quality is worse but the framerate smoother)
Mouse support

+/-
Linear structure (chapter-based, in most dialogue scenes you're made to pick between various choices but there's really just one to pick (sometimes obvious or something that you can logically figure out from recent events but oftentimes making you repeat a choice several times and sometimes seemingly random), can sometimes get certain pieces of evidence or make minor progress within a chapter in the order you choose but it doesn't affect the story outcome)
Mostly cheesy 80s style or older music (mixed with some more tasteful Vangelis and Art of Noise-like work)
Jonathan and his best friend are inspired by the duo from Lethal Weapon and some of the settings by Blade Runner and other sci-fi movies
Lower res (almost cut in half and it never covers the entire screen - there's a large black border around and a large black space (for the text) underneath every image (this is the case in the PC-98 version as well though)) but much higher color count artwork than in the PC-98 version
Easier bomb defusing sequence than in the PC-98 version - parts of it are still kinda bullshit though
Somewhat different character designs and color choices than in the PC-98 version (sometimes better, sometimes worse - the PC-98 version is all sprite art) and no portraits are shown when there's voiced dialogue (subtitles instead)
Somewhat different and shortened script compared to the original PC-98 version (the game is still quite wordy)
Doesn't use "Old L.A. 2040" as its opening theme (it can be found in-game though and the one used shares some of its melody)
Some unintentionally funny moments (clicking on your old buddy's photo in the beginning triggers a saxophone melody, some of the script has a pretty pubescent and horny tone to it)
Some offensive comments about trans people
Fly swatting scene that goes nowhere besides making you slap a female NPC's boobs
The game makes it obvious when you're onto something with creepy jingles
Some acts are very short (act 4, 3 and 5 are also pretty short)
Interesting but overly drawn out camera surveillance segment (gain control over 8 cameras at the space museum)
Cheesy cigarette pack scene during the ending

-
Some interface/control issues (can't speed up individual lines during spoken dialogue, unskippable cutscenes - pretty slow scenes overall, about a second of delay when examining things that cause a zoomed in image to pop up and sometimes 3-4 seconds when examining something that triggers a voiced line, no journal/message log feature (instead there are summary screens shown after loading a save - not as good but they do help, can't review info from examining stuff (sometimes can't be repeated by checking the thing again and sometimes only in part)), can't highlight points of interest in a room/area to speed up exploration (shoulder buttons could've been used to jump between them) - various items don't stand out much from the background, dialogue subjects sometimes disappear after exhausting all options and sometimes don't)
Some tedious aspects (sometimes have to pick the same dialogue option several times to trigger story progression, sometimes have to show something several times to an NPC for the game to proceed (Tokugawa building reception), pretty slow Act 1, copy protection-style puzzle to get into the t-gear computer and check a CD (game expects you to check the manual as you can't get enough info from the chart at hojo's house), often can't hit a moving target during light gun segments, sometimes have to examine something seemingly random to be able to proceed, a bit too much focus on technological trivia at times)
Some trial & error (sometimes if you trigger a certain piece of dialogue then you'll miss out on other dialogue as the story moves ahead without there being an obvious clue that this would happen beforehand, weird how during the bike chase the biker can just pass through other vehicles while you have to shoot them to avoid them, the bag with a bomb in it segment - the game tricks you by making some bags look near identical but only at some points when looking at the same bag! - not that hard if you're patient but it's still tedious since there are so many and the voiced dialogue goes on and on in this scene, parts of the bomb defusal segment and the timer is pretty short, massive shootout when fighting your way into the tokugawa building - easier than the bike chase though)
Some meaningless dialogue choices (accepting Lorraine's case, can't choose to check on Lorraine after the attempted murder, not entering the escape pod while on the moon?, can't choose not to shoot at gates in the late-game) - there doesn't seem to be any meaningful choices
The game often tells you no when you try to do something you're not supposed to (why have the option then?)
Jonathan's VA doesn't completely fit (sounds older and more masculine overall)
Some character details and animations from the PC-98 version were removed
Missing some features seen in the Saturn version (see below)
Some plot oddities (weird how Redwood doesn't remember your previous conversation at all - yeah they can switch personality but why would it affect memory? (and in the same convo he does appear to remember it when asked about something else), can't keep pressing Chris about the kid that's not hers, weird how you don't bring a camera for evidence until act 5, decent twist where you get set up though it should've been possible to act on the hunch your party gets on the night before+take photos, Ed probably should've seen a kidnapping coming while you were on the moon, weird how you trust Chris with taking care of Ed and how Redwood kills her when she's his mom+doesn't kill Ed while he's at it) and some cliché parts (villains explaining themselves in long semi-monologue scenes instead of taking you out and then getting killed right afterwards, pretty one-dimensional villains besides Chris (and the Redwood connection is interesting but not much is done with it), Jonathan going back to earth just to... be a loner hero type?)
Kind of limited animation and camera angles outside of cutscenes at times
Can literally fondle female strangers without consequence
Can't take cover during light gun segments (some unavoidable damage, sometimes an enemy appears and shoots you before you can move (you don't always take damage from this though))
The detective work part where you figure out that Chris is working with the bad guys (I mean she was in a relationship with one of them already...) could've been a more in-depth puzzle - you really just click on the cast in a photo until you guessed right. In fact most of the intelligent moves that you or your allies make are automatic and told via cutscenes when they could've been interactive

​
Notes:
-The original PC-98 game is from 1994
-The Saturn version contains a few extra scenes and slightly modified story elements, making it the most comprehensive of the console releases, as well as light gun support for the shooting segments. It also has most of the goodies from the Private Collection, including the ability to look up any term in the glossary via hyperlinks in the in-game text. /HG101 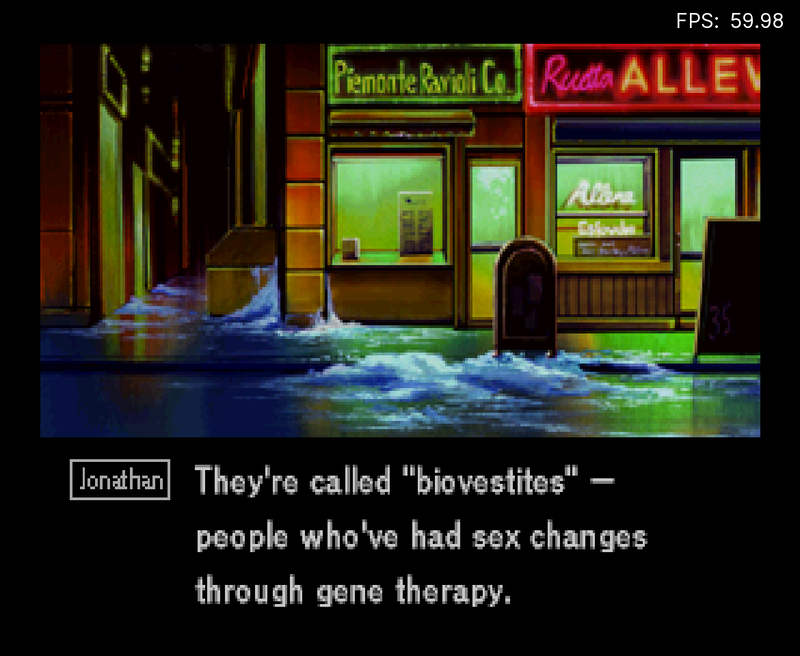 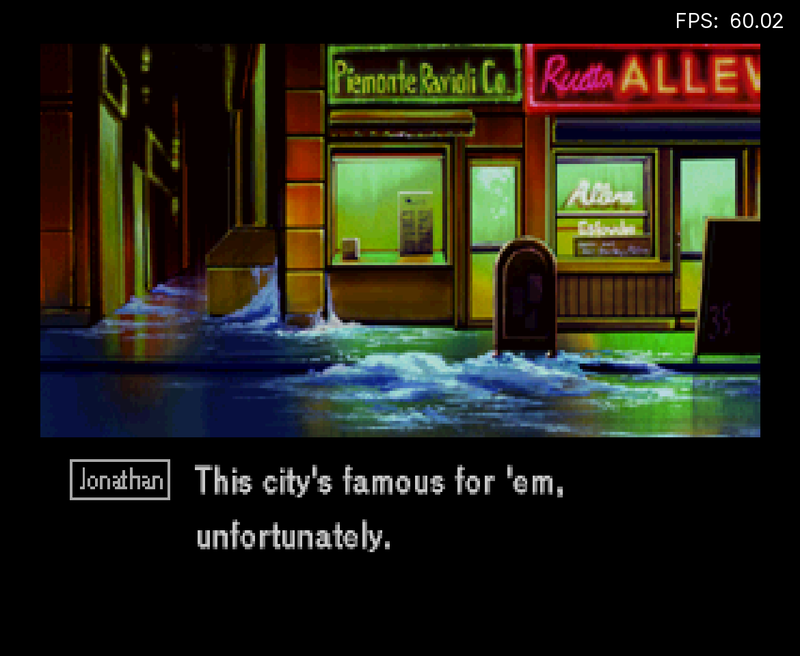 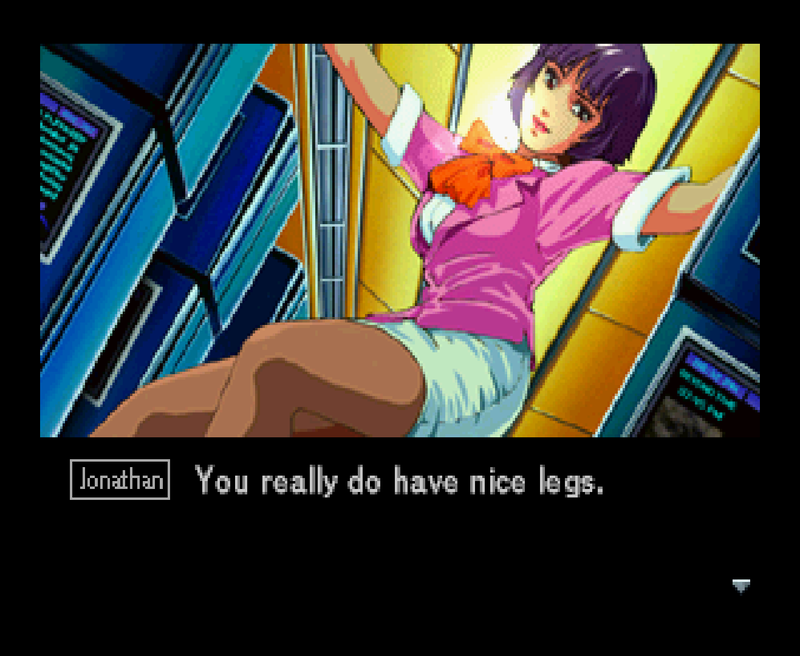 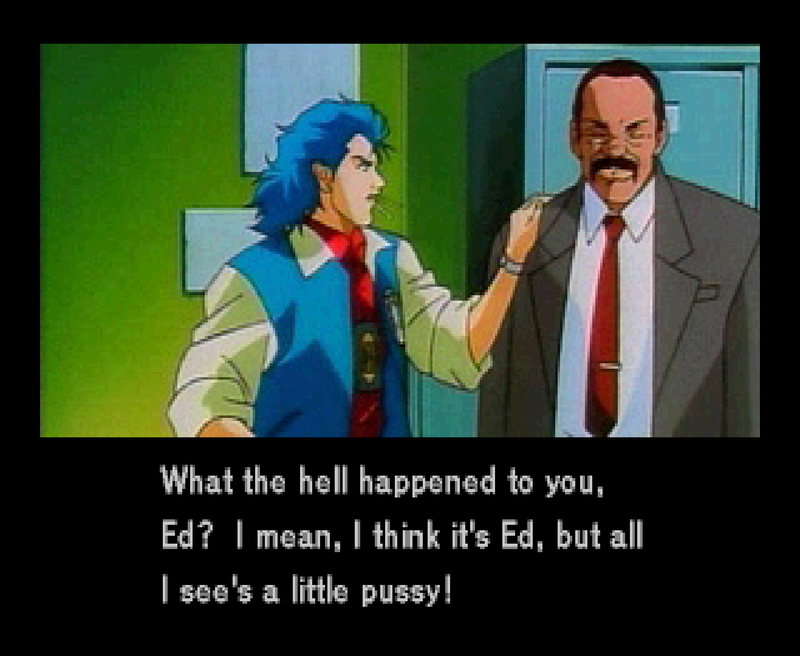 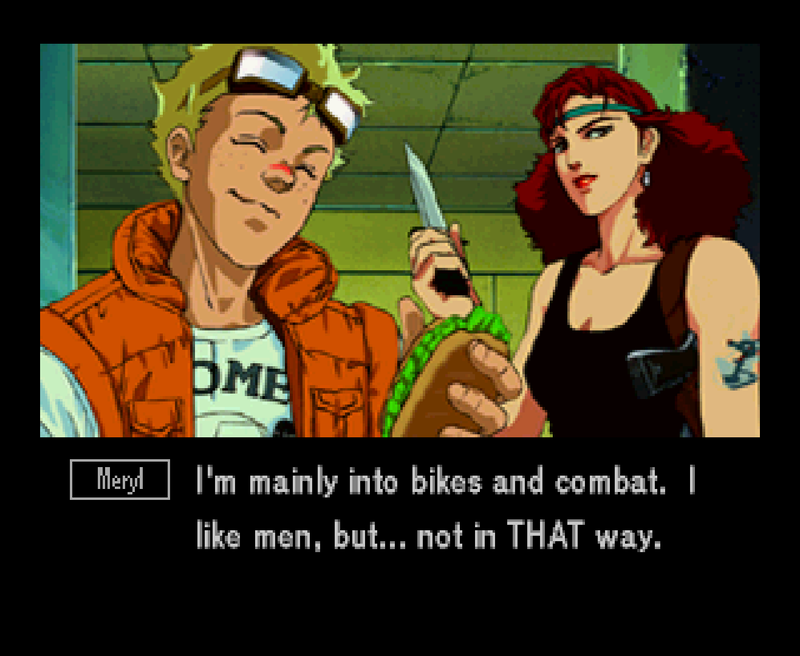 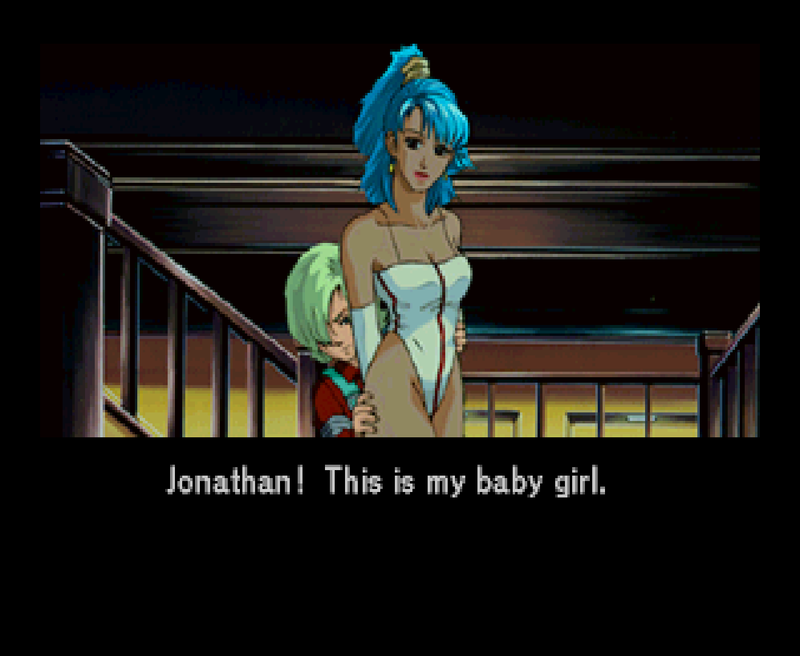 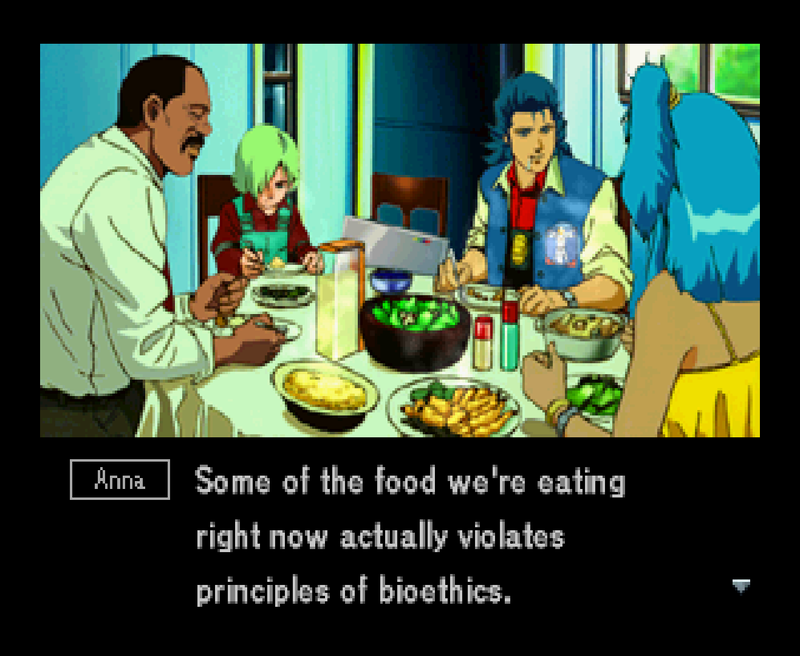 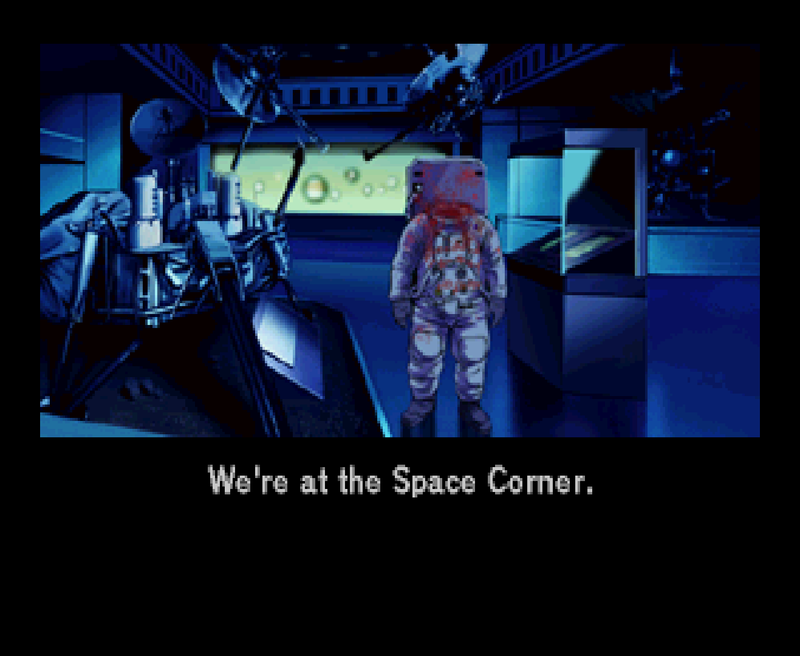 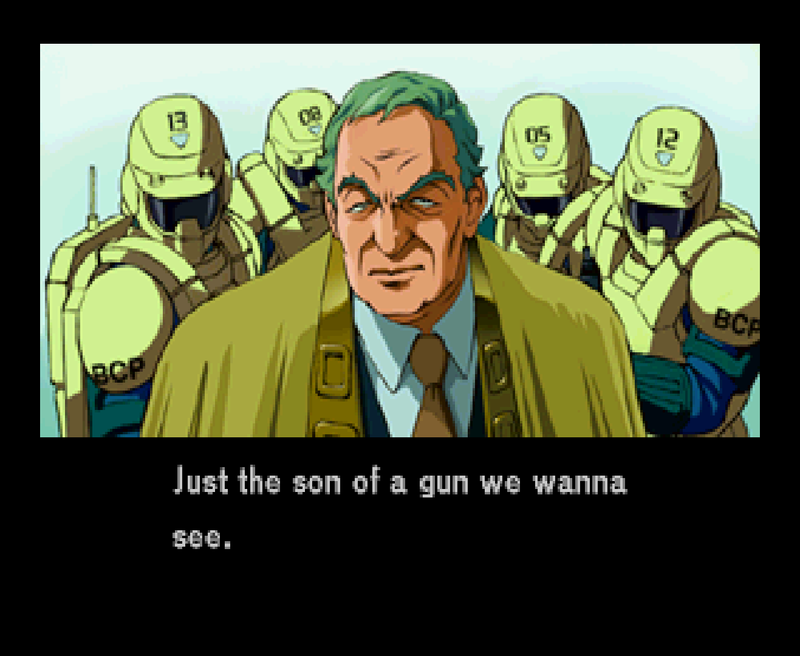 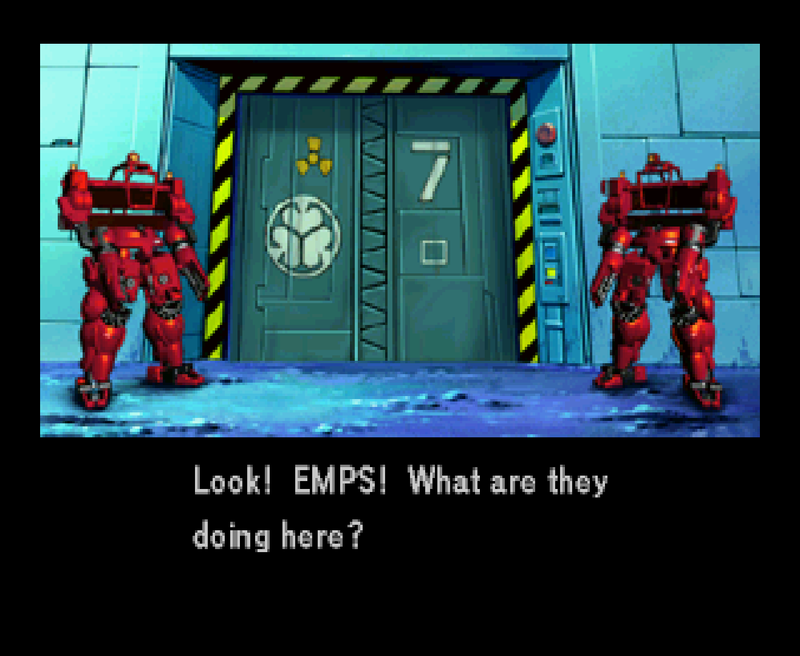 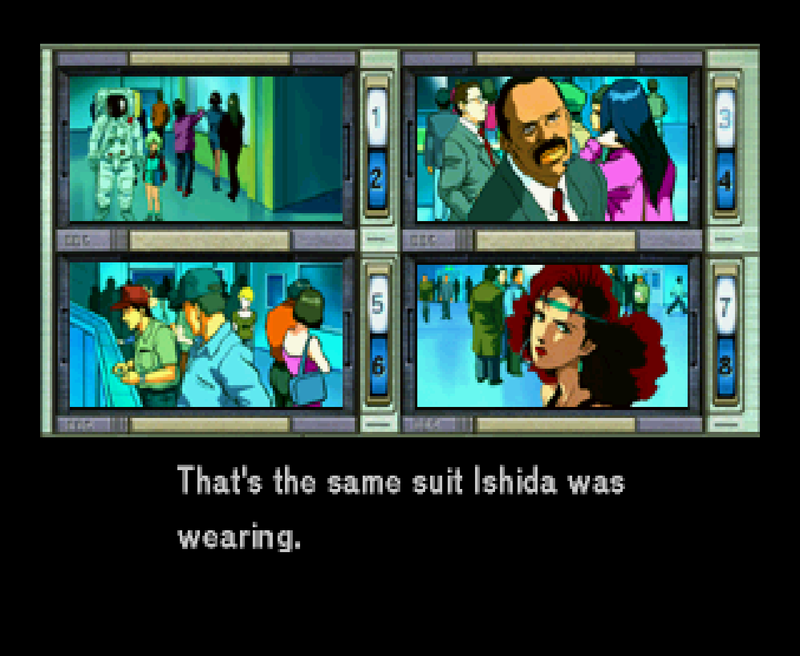 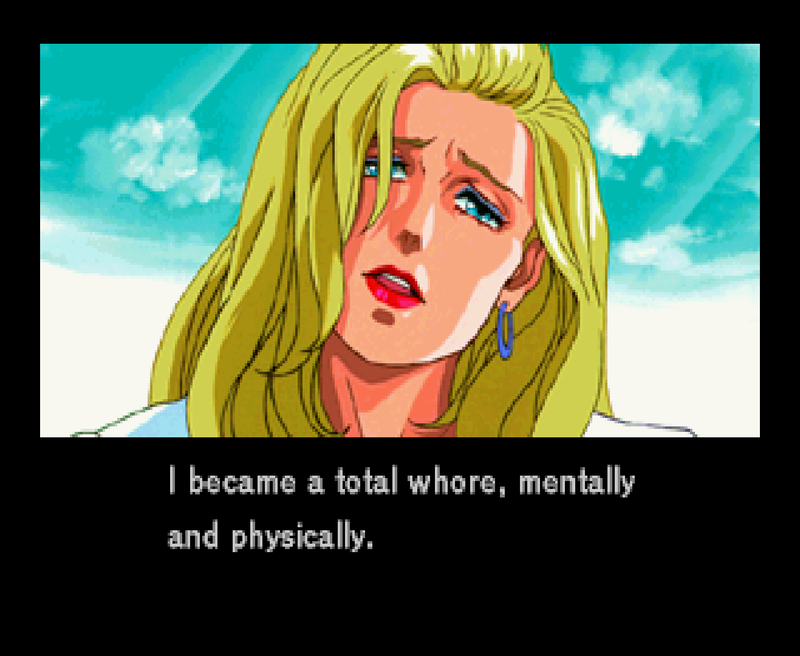