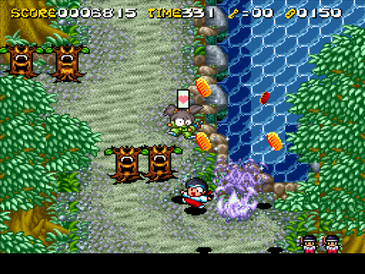 - No dodge move, bosses no longer flicker before death, your partner sometimes shoots and sometimes doesn’t (weird!), only one partner can lift rocks that block your path, stronger colors (sometimes nice) and less consistent spritework (usually worse than the prequel), extremely pixelated bomb explosions, Pocky is always the main character in 1-player mode, no more bombs (replaced by throwing your partner – long cooldown instead of ammo and it only works on bosses or obstacles) or fire shots, less intense (enemies don’t keep coming if you stand still), some trial & error (bosses, back attacks), somewhat unsmooth scrolling, lame intro (cutscenes generally look much worse), the control scheme for the second shooter level sucks (you move very slowly and Pocky turns around when you move backwards) and the boss is the same as in the first one,