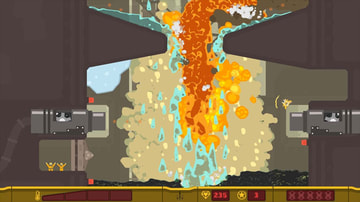 + Fairly advanced physics (gas, liquids), twin stick controls for movement and aiming (pressing both in the same direction gives a minor speed boost), ship overheating system as health (enter water or do the roll move to cool down), semi-homing missiles (hold attack), some hidden rooms and items, pretty good physics-based puzzles, alternate paths through the game (two per world?) - however the forced collecting often makes you want to backtrack and play the other path if you're not searching thoroughly in each sub level, good hint system, hostage rescue and stealth elements,

+/- Unlockables (collect diamonds - not sure what yet), many attacks "kill" near instantly (you do get a last chance to steer towards water and not explode while the ship is falling), the "sponges" don't absorb liquid when held onto and don't release liquid when not, enemy shots or player shots don't explode gases (only lava does), alternate weapons (suits) don't carry over to the next sub level and you can't switch between them, no shops, no time limits?, miners can be killed (no tangible penalty?),

- Forced collecting to progress (don't need to save all miners but at least need to clear the area of them, don't need to get all diamonds but you do need to look out for them at all times), hard to dodge quickly (the roll move is a bit clunky plus it isn't always adequate and can't be remapped), some minor unskippable cutscenes, somewhat bland visual style, sense of place could be better if the miners were shown doing things, kinda repetitive, some trial & error (ambush attacks, easy to get hit by your own lava beam but you can't get hit by torn off ice blocks falling down on you), no maps, pretty uninteresting NPCs, some waiting for environmental effects to happen, sometimes loose scrolling, some bosses take too long to beat (ice world boss), miners are increasingly placed near enemies as you progress,

Bugs:
-control config bugs (leave at default if using an XB360 controller or the aiming/movement gets screwed up),