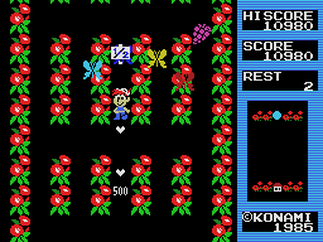 
​+ On foot vertical shoot 'em up (similar to Elemental Master) where the levels are divided into multiple lanes which you can switch between with short jumps (similar to some segments in Sonic Colors) - there tend to be partial walls between lanes and you need a power up to jump over these, branching paths between levels (see Darius), speed upgrade power up, temporary time stopper power up (also lets you defeat enemies by moving into them), respawn on the spot, some breakable obstacles, smart bombs (they're used as soon as you touch them though and sometimes they're not placed efficiently), can shoot up or down,

+/- Makes you play the entire game in reverse after beating it (the good thing is you can take a different path and see more of the game in one go), lose power ups after death, one hit deaths, can't move down while shooting up and vice versa

- No continues and fairly hard to rack up extra lives, can only have three of your shots on screen at the same time (makes it harder to turn around and shoot quickly), no auto-fire, repetitive, no bosses, some difficulty spikes, trial & error, unavoidable deaths near the end? (the "asteroid" rain),