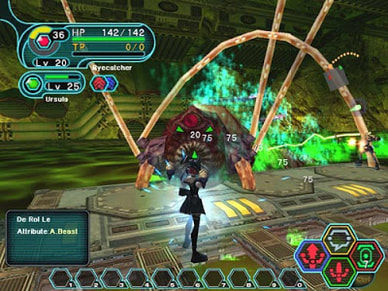 
​
+
4-player online co-op
your character is saved on- and offline and you can switch to the other game type at any point
detailed character model customization (hair and eye type, skin color, some other colors, clothes, proportions and size; no gender switch though)
9 character classes
mini-map (rooms, doors, enemies and players, static or rotating option)
refugee/immigration theme, drone/mag mechanic (adds a bonus to char stats and has the ability to charge up when the owner takes damage; this charge can eventually be unleashed in a devastating Photon Blast, synchro - affects photon blast strength, IQ - ?, can level up and evolve up to 3 times, ), control config, text speed options and you can speed up dialogue on a text box basis, chat shortcut tools, heavy/slow and light/fast attacks, player killing possible in JP ver., decent art direction overall (similar to Metroid Prime, sometimes cluttered design), difficulty options (normal-very hard or ultimate in Ver.2), automatically lock onto enemies (can't lock the camera onto them like in OoT though), dancing with two gender role types in the lobby (PC only?), pretty slick menu design, very good draw distance and frame rate, can block melee attacks, pretty good effects overall (spells, lighting), enemies with elemental affinities, CPU allies in some offline missions, no backtracking after beating a guild mission (a teleporter appears, can also buy telepipes to teleport back to HQ at will), dynamic battle music, weather effects, message logs for some lore, some interesting enemies (teleporting hoverbots, migium - enemies linked to form a cannon that which up when hit with spells, some enemies can kill and gain exp from other enemies), combo attacks with timing requirements, stash/vault in the HQ, pretty good bosses (huge models, multiple patterns), some moving traps in dungeons, upgradeable weapons with certain items, basic puzzles (colored switches, dark rooms with light switches you need to find and flick), scape doll (saves you from death once - Ys 2?), some HP/MP restore points in the dungeons, detect and destroy traps, can replay all missions after beating all of them,
Ver.2 (mostly online only changes?): Shortcut menu for equipping and using inventory items on the fly (can hold R and use up to 3 manually mapped techniques/spells), level cap increase to 200, faster level ups, rebalanced drop rates, adds "ultimate" difficulty, new multiplayer-focused "challenge" and "battle" modes, several new single-player quests, "Go Go Ball" and "dressing room" mode (accessed by using 100k meseta, change player characteristics without re-creating the character) was added to online lobbies 11-15, some new items, bug fixes,

+/-
Partially non-linear structure (can choose between 2-4 missions at a time)
no jumping?
techniques are learned by finding items rather than leveling up here (you can also level up via certain items given as rewards)
the game is harder online
can move through friendly chars during missions
some classes can't use techniques (androids), more exp goes to the one who lands the finishing blow on an enemy, can't look around without moving (can only flip the camera 180 degrees), the game doesn't pause while browsing menus during a mission, can't using healing items during a combat animation, Diablo 2-like life system (drop equipped gear and money but not what's in your inventory, unlimited lives), auto-run (takes a few steps to kick in - a bit of a shame since it could've been used for doding if manual), mostly linear missions, when exploring a previously explored area during a new mission the game resets your progress in that area (good in that you get more exp and items but leads to more repetition) - keeps happening until you beat the boss of an area, zoomed in full area maps (can't zoom out completely), some enemies become invincible during their attack animation, enemies can't pass through doors, no dungeons with multiple connected floors (instead you warp between sub areas), purely stat-based blocking?, no selection memory for the shorcut menus,

-
Some difficulty spikes in SP (beginning of 2nd area, final boss - need to grind a few levels to withstand its double spell attack)
some interface & control issues (somewhat slow movement/some dead space, the map doesn't show switches, fairly simplistic combat in some ways - no dodge or strafe move? (can dodge some slower attacks by moving back and forth or circling the enemy), somewhat large GUI, annoying how the camera auto-focuses towards the first boss while it's flying, a bit annoying how you can't run near enemies, no stats/explanations in the shortcut menus (the odd spell names take some getting used to), the CPU allies move a bit too close and aren't semi-transparent when behind you, somewhat worse char select screen design than on PC, can't map techniques to the Y button (chat button), )
some CPU allies are way overpowered (Kireek in Battle Training mission)
somewhat annoying mission loading screen sfx and attack up technique sfx
a bit repetitive (besides the reseting of dungeons between missions you can't activate the three pillars the first time you encounter them)
​you stop moving if you touch a wall or object, Elenor talks about your Mag even if you don't have one in one of the missions, keep finding items that you already have a full stock of, kinda slow paced in single player (would've worked better if you could hire a CPU ally for every mission), some trial & error (can't ask around about the locations of the three pillars, quitting during a mission cancels that mission and quitting after getting to the next sub area of an area (such has forest 2) cancels your current exploration - using a telepipe could've made it save that teleporter position at least, no warning before the first boss), not much interactive dialogue and what is there is partly fake choices, some tedious enemies (nano dragons - keep flying away and their attacks can steal your kills), can't pick save and continue (have to quit to the main menu and then go back), repeats the second boss for a mission in the third area and then the third boss after activating the pillars to open the door to the ruins, attack and pick up item mapped to the same button, not enough to spend your money on offline besides consumables, can't upgrade the elemental properties of your weapons?, can't detect the falling traps in the ruins?, many similar missions,