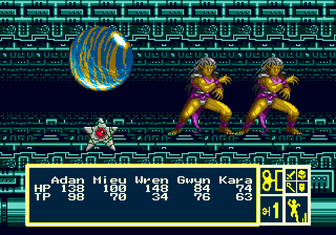 +
Less dialogue repetition and better directions
better gear progression in shops (though it's made somewhat too easy here)
interesting tech distribution/focus mechanic (balance which type of spells become more efficient at the cost of others - should've been explained properly in-game though)
overworld theme arrangement builds up as you progress through the game
some meaningful choices (choosing who to marry at the end of a generation - the choice would be harder and more impactful if you had more experience with both women of each generation though and you'll end up doing basically the same thing towards the end regardless of the path you took)
some good cutscenes, pretty good final boss, somewhat improved battle backgrounds over the prequel, transform Wren into various vehicles (airship is the most fun one), fairly interesting setting (basically a huge greenhouse/spaceship), some large and detailed (though poorly animated) enemy sprites, escapipes, party members can choose to defend each other (see Cover in FF7)

+/-
Simpler dungeon structure (often just one large floor)
you start out with a map item of sorts (rather primitive but it eventually shows how the different areas are connected making warping easier)
limited inventories (15 items per char)
unusual and somewhat disorienting story/setting early on (the marriage, Rhys' behavior, the cyborg and airports, etc.)
many NPCs act like pieces of a walkthrough (see Battle of Olympus, Zelda 2 etc.; gives the game an 8-bit feel)
the way tech distribution works you can't always increase the power of the two techs you want since the one placed opposite on the "board" will be the most decreased, battle theme changes depending on how the battle is going (unfortunately the changes are very abrupt which can be jarring), more realistic visual style in the overhead segments, physical attacks never miss, can't switch gear during battle?, can't play as a woman choosing which man to marry, can only land as the airship on airstrips placed here and there (reason is that you'd have to go fetch another upgrade to go under water but they didn't really need to restrict air travel to achieve this), can't use escapipes in the final area, can't use Megid or Grantz (telepipe/escapipe spell) manually, some passages can't be used at all throughout the game (regardless of which path you've taken - possibly unfinished parts), silent player character, underpowered Melee/offensive techs, no stealing, almost any spell can fail if it's too weak (meaning you can waste turns/TP on for example trying to heal poison), cyborgs can get poisoned

-
No telepipes (for teleporting between visited towns, the party quickly becomes overpowered without any grinding (not sure about the original game)
there's some very tedious backtracking like the trip from the rebel cave in Elysium back to Aridia) - you eventually gain the ability to warp between Laya palaces though
balancing issues later on if you marry Maia in generation 1
first boss (King Cille) is still too easy
​poorly told story for the most part (very little lore/exposition overall (until the late game), shallow characters, no party banter)
many spells have their names switched around compared to the other games in the series
Fanbi and Shu are overpowered since their effect accumulates with multiple castings
the first cave in Aquatica (south of some town ruins) and the space shuttle dungeon entrance are still invisible
some typos and unfitting swearing or overly blunt delivery (perhaps due to space constraints)
plenty of dead space (for example a pointless forest maze in Skyhaven (since there are no monsters here))
​slower walking speed (can be helped with GG codes though it needs to be turned off for some parts to work properly) and somewhat slower screen transitions than in PSII & PSIV, most dungeons look slightly worse than in the prequel, oddities (Alair and Lune didn't age a bit in one generation's time?, "Lune forbids it!" (the guard in the Landen-Aquatica passage) - Why does he forbid entrance to Aquatica and why can't you just beat up the guards blocking your way? It's also weird how guards block most but not all Laya palaces and before you know what they're for), you still get the "only Layans belong here, begone!" message in Laya palaces after you have her younger sister (also named Laya) with you - would've made more sense if the voice asked for Laya's pendant or something, how the game introduces cyborgs and other futuristic elements without explanation, if Layan law forbids killing then why are they attacking you?, it's never explained why you couldn't just take either of the ships to Cille in Aquatica or to the west in the Landen area, "blocked" cave entrances that look just like non-blocked ones, cyborg village NPCs don't react to you having found Wren and Rysel NPCs don't react to the climate change, Rhys won't say that he can't operate the machines in the weather satellite system in Aridia if you go there before finding Wren, grass around and humans (?) inside Hazatak (the "cyborg town" in the desert area Aridia), grass in Mystoke (Frigidia is covered in snow/ice) and in the supposedly barren wasteland of Terminus), dated interface/mechanics (the game doesn't tell you the name of locations you've just entered or which floor you're on, hit all-spells hit one enemy at a time (tedious even at the fastest speed), can't stack consumables, can't sort inventories or techs, can't buy more than one of each item at a time, can't see gear properties and how gear affects a char in the shop menu, can't change text speed in-game (bad since it also affects battle messages and the top speed is too fast there), can't quickly switch inventory between characters, game tends to exit out of menus or submenus after choosing something or using a tech/item), sprawling/inconsistent art direction (many odd enemies, no char sprites during battle, 8-bit looking menu icons during battle, palette swapped backgrounds that seem a bit rushed at times, lacking/silly animations here and there), frequent random encounters (can be turned off at will using GG codes but not altered like in PS II), plot oddities (townspeoples non-reaction to the prince's escape in the beginning and him not asking to meet up with Lena somewhere, two of the characters that breed later on are second cousins, the scene where a recently deceased char wishes the party well), no storage room/box, tech distribution on the go (for a higher cost - maybe with the use of an inventory item) would've been more dynamic/increased flow, no cutscene for the climate change, mostly crappy treasure chest items in the dungeons, makes so-so use of the sound chip overall (no drum samples, shrill instruments and scratchy/weak sfx at times, etc.), only two (unnameable) save slots, everything looks pretty much the same in the second and third generations, no critical hits, characters don't remember battle commands between battles or even between rounds when using the 1 round command, final area looks just like a few previous dungeons, somewhat anticlimactic final dialogue by Dark Force ("oh well, see you in a thousand years!"), no hidapipes


Notes:
Doesn't mix well with the text cleanup hack (some item names and dialogue scenes are screwed up)
Guide: http://ps3.huguesjohnson.com/