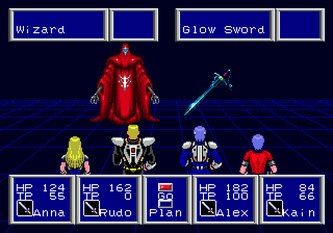 +
Dark sci-fi dystopian atmosphere
fitting and memorable soundtrack
escapipes/hinas (escape a dungeon) and ryuka (teleport to the last visited town)
hidapipe (keeps weaker monsters away - pre-Earthbound)
teleport between visited towns (jet scooter teleports with you (ends up on the nearest shore) but also changes positions slightly if you visit a town after docking and then head back to it)
interplanetary travel, vehicles, manually re-organize your party at any point (need to pick up new members by revisiting your home while progressing through the game though - would've been nice if you had some communication device that notified you of new members), party character permadeath pre-FF7 (not nearly as emotional though), pretty nice cutscene stills overall, multiple enemy types in the same battle, some large and detailed sprites, animated enemies during battle (mostly rather primitive though), decent art direction overall (portraits, sprites), auto-battle command (characters keep using the same commands until you press A/C to cancel it), enemies with elemental and other affinities, some spellcasting gear, steal from shops (works a bit weird though - need to have Shir in the party and she'll choose and steal something on her own (go in and out of the same shop until it happens) then go back to your house in Paseo), storage room (keep items here for later), enemy and NPC dialogue updates in Motavia after a certain point (where your party becomes fugitives; most NPCs say the same thing though), fairly unexpected plot twist right at the end

+/-
Four nameable save slots (only four characters though and you can save only in specific houses in towns until you get a Visiphone (can be stolen from the storage room when Shir is level 10 (level 1 with a hack)))
all caps text in menus (fixed in Improvement hack)
no first person 2.5D dungeons
the difficulty can get pretty random at times due to strong enemies getting several turns in a row (see FF4 and other early JRPGs) and randomized stat growth
separate and limited (16 slots) inventories
game doesn't tell you the name of the area/dungeon you just entered, you can only sell items in the tool shop, can't use stat boosts right before a battle (making some spells not quite worth it for the most part (battles are generally short) and battles where you use them a bit longer), very few enemies cause status ailments up until the dams, moon dew (revive) is very rare (need to be stolen (takes a while) or found), can't rest outside of towns, no in-game maps (the game did include a hintbook with maps but some of the dungeon maps in it are slightly incorrect), can't steal or get loot items from enemies, no diagonal movement and characters tend to get stuck on edges that you move into, the game remembers item and defense commands until the next battle but not spells/techniques, dialogue choices rarely make much of a difference (picking no generally halts the story until you pick yes but there's an exception during the end scene where you can get some exposition by picking no), surprisingly straightforward final dungeon layout, tech/healing items are a bit overpowered (fairly strong spells and they never run out of charges; snow crown, storm gear, gires items), fairly easy final bosses if you just look up how things work in the game (even though you can't see how effective your attacks are during those battles), no fall damage, characters learn spells/techs automatically through leveling up

-
Somewhat slow walking speed (no land rover or ice digger in this one)
very frequent random encounters (can use GG codes to remove/decrease/increase them at will though)
lots of grinding required (mostly fixed in a hack)
pretty repetitive and hard to navigate dungeons (due to frequent encounters, lack of an in-game map function, dead ends, party always facing south after a battle, loose scrolling, teleporter/elevator mazes, and samey backgrounds)
dated GUI/interface/mechanics (spells cast on allies are wasted if the target dies during the casting, can't quickly switch gear between two characters, fairly easy to miss how much damage your characters are taking in battle when more than one of them are taking a hit at once, can't see party HP when using a restorative item in the field menu nor party MP + MP requirement when using a spell/tech in the field menu, can't see max MP/HP in battle, can't see spell MP requirements in battle, can't stack or sort items, the game doesn't show you which characters can wear what gear in the menu (shopkeepers do tell you/hint at it though), need to go into the menu to use a key on a locked chest/door, no item descriptions in-game and you can't compare gear in shops, can't buy more than one of each item at once, game completely exits the menu after each spell use in the field, can't choose to equip new gear in the shop menu, can't pick a specific enemy to attack out of a group of two or more of the same type (only the enemy type is selectable))
poorly told story for the most part (lots of time passes between plot points, so-so writing at times, mostly undeveloped characters (cartoonishly evil earthling villains who can't be negotiated with (which would've made sense since you'd just beaten dark force), no party banter), some translation issues - fixed in a hack), only three bosses, poor sfx overall, nearly all battle backgrounds look the same (grid pattern - kind of disappointing after the first game), some bugs (fixed in a hack), no PSG used in the soundtrack?, so-so character balance (Shir kind of sucks except for the stealing, no TP restoratives limits some characters; mostly fixed in a hack (makes Shir not steal on Dezoris for example)), expensive gear early on (fixed in a hack), can't move right out of the first tunnel although you can enter it from the right when coming at it from the other side, overly obvious clue at the tower/second dungeon (flat out tells you what to use to get in), can't show the ransom letter and dynamite to Teim's father (Darum), plot oddities/holes (it's never explained why the Palm government are so quick to view the party as terrorists (probably mother brain/dark force influence or that they wanted to cover up the experiments leading to Neifirst), didn't make much sense for the earthlings to destroy Palm since their government was loyal and they wanted to inhabit the Algo planets themselves, choice to get more exposition in the ending segment doesn't quite make sense due to the poor translation (fixed in a hack), how do NPCs in dungeons not get killed?, can't clone Nei after a certain point due to her not being human (then why did it work before?), doesn't make sense that you have to find all the towns on Motavia since people would be traveling back and forth via the teleport stations, no reaction from people in Arima after dealing with the "scoundrels", why would Teim act the way she does in the reunion with her father and why couldn't they revive her after the incident?, ), sometimes confusing perspective/solidness of objects (building signs hinder the player, the glass containers in the biosystems plant + some later statues look like you should be able to move behind them but you can't), dead space (dungeons, tube tunnels, etc.), plenty of crappy items in dungeons, no visual or other clues to the locations of the entrances to the Uzo island mountain or the control tower dungeon, poor clues for the location of the underwater passage to Climatrol (south of Uzo island/northeast of Shure), need to level up new party members (discourages experimenting and slows the pacing down a bit), limited shop inventories (means you'll have to move back and forth between towns to get what you want), repetition (many palette swaps (Amy and Shir as well as Hugh and Kain's field sprites are palette swaps of each other) and enemies re-used in different places (takes away from the uniqueness of new locations), all motavia towns look the same and have the same music playing, all dezoris towns look and sound the same as well), only two planets (compared to three in the prequel), NPCs don't move out of the way when bumped into (only becomes a problem in skure space port though), some backtracking (can't teleport to the Naval area or to the Esper palace (before getting the Neisword)), the Naval dungeon (need to make several tight jumps into pits which are hard to get right without online maps and if you fail you have to backtrack several floors to try again), rarely seems to use more than around half of the console's palette, dungeons lack puzzles and action elements (FF5, Lufia II)


Notes:
-Easy+improvement hacks increase exp/gold gain (4x is a bit much though and I recommend being lower than lvl 30 for the final dungeon. Use the GG codes to avoid battle when needed), fixes bugs, improves the translation a bit and rebalances a couple of things
-Modernization hack increases exp and gold gain, fixes bugs and rebalances many things
-Recommended party: http://www.gamefaqs.com/boards/526675-phantasy-star-ii/55796327