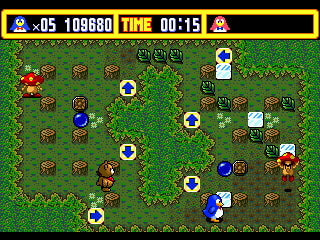 
+
Battle mode (1-4 players free for all, can also remove players) and single player or 2-player co-op story mode (second player can join in at any point)
Three new mechanics (chain slide mechanic - push a block into another and the first one stops while the other one slides away and hits another one - repeats until a solid wall is hit, small area of effect damage (two tiles to either side of it relative to from where you pushed it) when an ice block breaks and this causes chain reactions to the sides if you slide a block in-between two others next to a wall, can spawn ice blocks but they now disappear after being knocked into something, combining three arrow blocks in a row causes a smart bomb here instead of ending the level),
Bomberman-like gameplay (top down view maze action, single file paths, killathon, etc.)
Some good bosses
Some new power ups (time freeze - can be good or bad depending on your timing in some worlds in story mode (also freezes electric traps as well as some enemies when they're in an invulnerable state), temporary "can't spawn block"/"can't kick"/reverse controls power ups - appear during some boss fights only in story mode, invincibility, how many ice blocks can be created at once, movement speed up/down - battle only) and interesting level gimmicks (ice block machine in robot world, ball attached to one block that spins and hits the block that hit it in another direction - Kickle Cubicle?, one way arrow tiles - Lolo?, random teleporters - Bomberman, weight switches - Lolo or Zelda 3),
Includes the original arcade game (pretty much identical except it's missing the Popcorn cover and the levels are somewhat zoomed in so they have to scroll vertically), better variety, pretty good animation and expressive sprites in-game,

+/-
Password save (short)
Killathon
Different mechanics in some ways (levels have more solid walls arranged in a maze-like manner, ice blocks can be created but disappear after being knocked into something - in the arcade game you had to be next to one and it be next to a wall or other block for you to break it, arrow blocks can be destroyed if hit a few times while next to a solid wall/block and combining three of them doesn't end the level here - they also respawn if you lose a life, most enemies can't break the ice blocks here) - no option to use classic mechanics, smaller playing field/larger sprites than in the arcade game)
If you stand still at the point where an ice block spawns then you're temporarily frozen for a couple of seconds - oddly enough you're invincible during this
Pre-rendered 3D cutscene graphics (the models look pretty good but the animation and detail is rather basic)
One hit kills, level timers (2-3 mins), respawn in the middle of the level in story mode, can't move out of the way if an ice block bounces towards you and starts pushing you, can't simply push a block without making it slide - would make combining the arrow blocks a lot easier but the smart bomb effet is a bit weak considering how tricky it can be to combine them under a time limit, lose your "rate of fire" upgrades after using a continue, partial boss rush during the final boss (they're easier here though), no bonus from making larger chains?

-
Pretty slow default movement speed (should've been like in the original) - can't increase it in story mode
No difficulty options - limited continues (only 4)
Mostly negative power ups in battle mode - something that let you break solid walls or jump/dodge moving blocks or made the area of effect from your pushed blocks larger would've been useful
The enemy AI sucks in battle mode
Repetitive (somewhat lacking sense of progression when there are no attack or movement upgrades in story mode, levels never scroll, some enemies are too similar)
No team battle mode - a team mode could've let a team combine arrow blocks for a large attack or armor bonus for example (the blocks could switch colors depending on which team last pushed a block), levels are generally too crowded to get an impressive chain going (slow movement also doesn't help) - sand world in battle mode comes sort of close but there's no "open battlefield" mode (as in no solid walls), the handicap power ups last a bit too long in battle mode, some slowdown (robot world, minor slowdown in sand world), no power up/AI difficulty/time/player skin options for battle mode (5 mins per game, can pick which level to play next), no remix of the music from the arcade game and the original version is also not included (licensing issue?) - the music here is pretty basic in terms of the FM and not that memorable, the second boss is easy, some trial & error (walking into an arrow after it has hit something still kills you), some tedious parts (getting hit by the rock world boss since the "can't attack" effect takes so long to wear off, robot world's boss - slowdown and it's a lame boss), toy world's level gimmick is kinda lame (boxing glove), a bit too easy to end up stopping slightly when changing directions due to the overly tight timing required
​