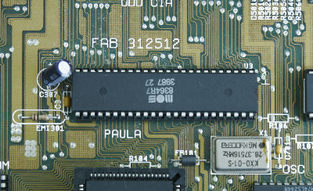 Being a sample-based chip, it reads waveforms from chip RAM rather than generating them directly. You could get past the 4 channel limit with software tricks (Turrican 2's title and intro tracks use 7 and so does Hoi's intro track, OctaMED tracker songs could use up to 8 but from what I've read it was a struggle to increase the channels to just 6 or 7 for an actual game while maintaining the same sound quality). One rarely used trick (Motorola Invaders 2) was to re-sample several channel tracks into one channel to give the illusion of using more channels, more akin to streaming a full song like in later Neo Geo games.

One technique that was sometimes used (for example in Toki, Battle Squadron, Hybris, Ambermoon, Bionic Commando and in tracker mods) and which gave birth to a style of Amiga music known as chipmod music to some (today it could be classified as fakebit), was to play small, single-cycle waveform samples of chiptune sounds to get C64 style waveforms, either combined with more realistic sampled drums like in other Amiga music, or sampled C64 style noise drums. This approach to Amiga music became popular in the demo scene (basically the indie scene of the period) in part because it greatly reduced the file size of each song. A trick that was eventually added to this style was to rewrite an instrument's waveform while it plays (sample offset?) to give it more character.

​I don't think the C64's ring modulation and filter effects could be used for these tracks other than via sampling, but the Amiga does let you combine two channels for a 14-bit waveform, or to modulate one channel with another one as described on wikipedia (AM=amplitude modulation). According to some blogs and forum posts you can also have a chain of channels modulating each other, which produces very similar results to FM synth. This homebrew track uses this kind of modulation.

Interestingly, you can also make music via software synthesis made to more accurately emulate the sound of the C64 without using any samples (AHX tracker), or use the SIDmon tracker which essentially does the same thing but also allows for samples to be used (it was rarely used for games, but one example is Venom Wing). The AHX tracker was made when the Amiga gaming market had already dried up, so it was mostly used for demos. Apparently the OctaMED also features a software synth, though I'm unaware of games that use it. Two other games that use real-time synthesis (for leads and chords) are Ghost Battle and Hoi.

Many YT uploads use the PC-based Deli Player to play back songs with a joined stereo effect (giving a more centered and dynamic sound as well as making playback less muffled than on the A500), when on the Amiga the channels were hardpanned as described on Wikipedia. You could do improved software mixing on Amiga using more CPU power, though it's generally not useful in a game environment from what I understand.

​Youtube Playlist (note that some tracks aren't on YT yet)
​