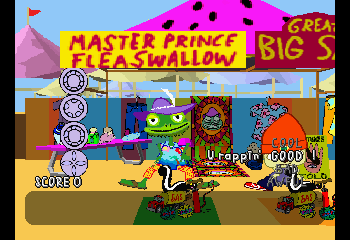 
​
+ Pretty creative gameplay (similar to the rhythm mini-game in Toejam & Earl 2 but a bit more advanced - full songs where you repeat the last measure of a rap/song lyric until the end of the song instead of a short drum beat), unique art style for the time (flat character models, flash-like animation), difficulty options (no hard mode though), practice mode (very short and simple though), courtship/romance theme, comical tone, decent cutscenes, some memorable characters, can enter a freestyle mode if you reach "cool" rank (do this by repeating patterns or parts of patterns on beat after hitting the right beats in a measure) - not explained in-game,

+/- No 2-player vs. or co-op, only covers two genres (hip hop and reggae) for the playable songs - some cutscenes branch out to indie pop/rock and r 'n b, at first you'll fail if you reach "bad" rank but later on you can keep going until the last measure in a segment, no mode where you actually need to follow the rhythm of the rap/song melody in the songs properly, no parts where you need to press and hold a button (see later rhythm games like Guitar Hero), the protagonist is a dork

- Trial & error (you should press right after the icon passes the marked beat (in emulation anyway), the rhythm display icon often starts moving right before or as a new measure starts and the rhythms don't correspond well with the rapping, in the final level you need to follow several measures in a row but can't see ahead far enough to know what you're supposed to be doing), sometimes inconsistent requirement for a good rank (at times I can keep the "good" rank while performing worse than I do when I go down to "bad"), a bit short, Parappa's rapping will sound a bit choppy even if you play perfectly