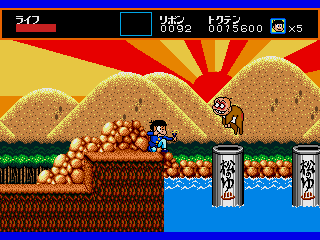 ​
+
Shop system (can buy bombs as sub weapons and increase attack range, maybe some other things? - explanations are in Japanese)
Decent art direction and background animation
Branching paths (some hidden paths - if you fall down pits or if you jump on floating turtle shells)
Decent enemy variation
Some mini-boss style enemies (kinda tedious to fight because of the control issues though)

-
​No continues
Very short (15-20 minutes if you play well)
Control issues (floaty movement, see below)
Can't move left/backwards in levels
Poor feedback when hitting enemies and bosses
Levels are overly basic and only scroll to the right

​
​​
Review:
I had another go with Osomatsu-Kun to check if it really was as bad as I remembered it from years ago. Well, it's not a terrible game but I can't recommend it either. Probably the kindest things I can say is that it doesn't look half bad, there's a decent variety in the enemies, and the levels have branching paths. Besides the doors in the background, if you fall down a pit, then you go into a cave area instead of dying. If you find a turtle shell mid-level and jump on it, you go to a short cloud area, just like in Mario!

It's mainly let down by poor controls, overly basic levels that only scroll to the right, and a lack of interesting mechanics or alternate weapons. For example you can't shoot while moving, there's a delay on each shot *and* you can't jump out of a shot, which combined makes a lot of combat with tougher enemies really tedious. There's also no feedback from hitting an enemy, so it's just not satisfying to combat them and that's the main thing you do in the game.

Another bad thing is that you can't go left, so if you were to change your mind about a path you took then you can't do anything about it. And in contrast to the visuals, the sound is quite bad; some of the worst on the system to be honest. Finally there are no continues, so you can't just tourist through it. Fiddling around a bit I was able to *increase* the difficulty (I think, there are 3 settings you can pick from) and lower my lives to just 1, by pressing A+B and up on the title screen, but that's the opposite of what I wanted to do.

So that's Osomatsu-Kun, or the first 3 levels of it anyway. It really does feel like something quickly thrown together right before the launch to try and cash in.

Edit:
Checking a playthrough, apparently you can buy bombs and a few other items in shops in some levels, if you take the right path. I didn't notice these because the doors look just like the other doors. I guess that makes it slightly more interesting? But I also found that the game is extremely short, about 15 minutes if you play well.
​