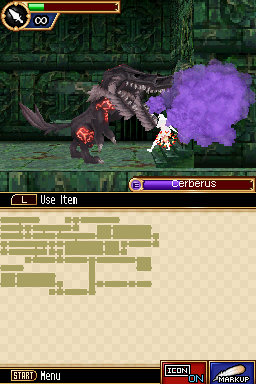 
*After getting the upgraded roll, a decent sword and the critical hit skill

​
​
​+
Almost fully voiced
Dawn of Sorrow/Portrait of Ruin-like platform adventure gameplay elements (separate town connecting to a large dungeon, gear crafting (items/tools, materials, weapons and sub weapons, accessories; use materials found in the dungeon), ability gating, shops, save points, some hidden items and breakable walls, some strategy in which skills to equip, optional side quests, ​etc.)
Large character portraits with different expressions during dialogue (no animation though)
Warp between found save points (but not back to town for some reason - weird since the first one is almost right next to the entrance), Teleport back to village item (can be bought, fairly expensive in the early game)
Charge attacks with large swords
Find additional lore via journal pages in chests
Quick item slots (assign inventory items to either face button then press L+that button to use them without going into the menu)
Decent map system (shows the layout, which room you're in, which rooms you've explored and room connections; always shown on the lower screen) - can also place markers on the map with the stylus (default symbols for save, key, boss and question+4 more colored ones you can use for whatever). Can't write notes however
Can run from the get go (hold R)
Shows enemy health bars by default
Quest log (can only have one quest active at a time though)
Some neutral/friendly monsters in the dungeon which can be talked to if their quest is active
Smart bomb items (can buy or find them though they are pretty expensive for the damage they do)
Some decent puzzles (spatial awareness puzzles, door switches you can hit from afar)
Some shortcuts (locked doors opened from the other side)
The small hop when using a sub weapon in mid-air can be used to reach certain chests before you're supposed to
Certain sub weapons have a high chance of dizzying (longer stun) or paralyzing enemies - chicken knife is pretty OP because of how long the paralysis lasts+you can buy them at a fairly low price
Dodge roll move (no invincibility time during it until you upgrade it after the first boss however; also used to pass some narrow paths)
Up to 5-hit sword combos
Eventually quite fast movement speed if upgraded
One good boss (ancient giant/boss 6 - just a bit drawn out and the slowdown is a minor issue)
Optional post-game area with stronger monsters

+/-
Somewhat infrequent save points in the dungeon at 3 per area (one save slot per game, shows various stats) and the first one is placed too close to the entrance. Save points also heal you
Enemies generally don't drop health items
Mostly linear structure (linear boss and area progression?, 5 different optional side quests are available from the get go and about 4 more are added as you get closer to finishing the current list (75 in total) however the selection also seems tied to boss progression (if you don't progress the main game then eventually you only get to pick between 1-2 at a time), can't talk to NPC monsters before unlocking their quest in the guild, no story choices to make, can cancel a quest and keep going but it just appears back in the selection menu with no effect on the game world - you do lose the money paid to start the quest however)
Crafting replaces leveling up (only certain found skills can increase some stats besides better gear - there's a slot system where you can equip up to 5 assigned skills/buffs at once and which is upgraded at certain points to allow for more at once+permanent skills which don't require slots such as HP increases)
Can get a quick additional strike in if you attack again right after landing though your timing needs to be pretty precise (if you do it too late the attack is canceled)
Menu-driven town exploration (guild - quests, blacksmith - forge or enhance weapons, item shop - buy/sell/craft)
Sometimes ridiculous clothing for the characters
Find crafting materials at certain points (similar to Secret of Evermore, however the game makes it a bit too obvious where to look with pop-ups when near a material spot; can farm material spots by re-entering the dungeon)
Enemies often aren't stunned by your attack when you hit them (not even from a charged attack)+they don't become non-solid after a successful hit so it's easy to get hit yourself from attacking (contact damage)
Some safe spots
Pretty small hit boxes (goes both ways though)
Random element to materials gathering (can find about 3 different ones in the same spot)
Enemies respawn when re-entering a room
Roll cancel however there are some annoying quirks to it (see below). You can't jump cancel out of or simply jump during an attack+the jump press doesn't register until after the animation is completely finished
Auto-heal from going back to town
Can't roll cancel a charge attack or lunge attack
Enemy drops take 10+ seconds to disappear
Weapons are much less common than in the Igavanias and you generally buy or craft rather than find them
Spike floors don't do much damage
Can't use sword combos in mid-air or while crouching
Partial control config (can only switch two buttons around - would've been good to be able to map roll to a shoulder button)
Can upgrade the lunge attack to a triple hit combo but each hit then does less damage (about 2/3) and you still can't roll afterwards - it does have a higher stun rate however so can be useful against knights for example
Whether or not you can perform a combo with a sword depends on the sword rather than your skills
Revival items that trigger upon death (ys 1 or zelda 3?)
Have to find the skill to deal critical hits in the second area (about halfway into the game)
Health ring lets you regenerate HP while moving around however it's too slow to be of much use - there's also a skill for this but it's also rather slow (and only works if you're not jumping)
Pretty easy to stock up on the level 2 healing items/supplements (blue mint is easy to find and the other ingredient can be bought cheaply, can also farm them from kobolds in area 1, in area 3 you can also farm level 3 healing from the kobold variant there which is 4x as good) - this lets you tank most enemies and bosses
Defense skills replace armor gear
The whole room is shown as explored on the map when entering a new room
Not much romance despite the game's title (something starts to develop but it feels cut short before anything actually happens)


Bugs:
-Color code puzzle in the second area is bugged with the english patch/in emulation - the right sequence if playing this version in DeSmuME is: [GREEN] [LEAVE AS IT IS] [MULTI-COLOR] [BLUE] instead of green, "pink", yellow, blue
​