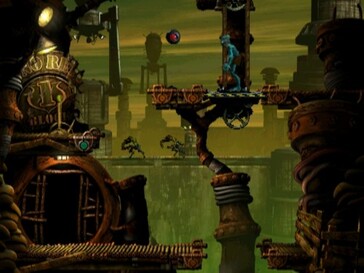 ​​
+ More speech commands ("work", "all o' ya" (get everyone's attention), "stop", slap (calms laughing/wired mudokons, works like "angry/grrr" from the prequel if no one is close which is useless), "sorry", "freeze" as a slig, "attack" as a paramite, etc.), nice cutscenes (intro, ending and in-between levels) and overall animation, quicksave feature (can be used anywhere - even in mid-air and right before a death which can get you stuck in a death loop if used irresponsibly but then you can use "restart path" to get out of it), restart from last checkpoint feature (can't see exactly where it is without dying though), pretty fast movement, nice cutscenes (well animated, good camera work), three more creatures to possess (paramites, scrabs, glukkons), smart bombs (shrykull deities), many hidden rooms (often no visual or audio clue though so finding them is often a trial & error affair, sometimes there are soulstorm bottles on the ground to indicate that there's a secret in a room), optional rescue mission/collectathon (300 mudokons here!), pretty good transitions between short fmv cutscenes and gameplay, some 2.5D elements (move between fore- and background paths via transporters like in Wario Land VB, shoot on the z-axis as Sligs), tutorial videos showing how to deal with various situations in the options menu, great art direction overall, basic bouncing physics for thrown rocks (grenades in Quake?, Yoshi's Island), vehicle segments (mine carts which can move on walls and ceilings - these work similar to the spider ball in Metroid 2), some cool setpieces (escape from the mines), temporary invisibility - temporary power which can't be kept for later, musical cues are used to create tension when spotted by enemies (MGS kinda), more noticeable levers compared to the PC version,

+/- Rehashes many level gimmicks from the prequel, one hit deaths, so-so humour (pretty basic and childish), can't laugh/whistle here (only whistle was useful - for the "simon says" segments), kinda tedious how easy it is to make mudokons/friendly NPCs angry (meaning you have to say sorry and they might slap you if you're slow), blind mudokons need more guiding/escorting to not hurt themselves, features slavery and torture, larger and more maze-like levels overall, harder puzzles, can't call on mudokons on a screen next to the one you're on, loading times between some screens within levels (~4-7 seconds - a bit faster on PC), can climb down some ledges but not others for seemingly no reason - the game does show which ones can be climbed down though with a subtle animation of falling rubble, gameplay hints on for example the electronic signs in the beginning (not as elegant as showing the player via the level design and mechanics), slapstick and fart humour, introduces enemies that deal damage without also adding a lifebar (the leeches), stealth element (sleeping enemies - decent but inconsistent in that jumping down to a lower platform and some other noises won't alert certain enemies but will alert others), faster menu transitions on PC (still pretty fast on PS1 though), more save slots on PC, repeats some tutorial messages (sometimes in the same level),

- Heavy trial & error (many chase sequences with cheap hidden enemy placements in level 2, you're sometimes thrown right into lethal situations when entering new screens, some enemy behavior - Sligs are inconsistent in that they sometimes follow you when moving between screens but sometimes don't and sometimes run off screen when you try to possess them while other times they don't, some mechanics (can't lure enemies from an adjacent screen (yelling should trigger them since you can hear them moving from one screen away), can sometimes talk to mudokons while in the shadows without alerting an enemy, being almost outside of shadows still counts as being 100% in them), no proper level maps (they can get pretty big and maze-like - sometimes there's a basic layout map but it's only displayed at a certain point in a level), have to input a password to save to the memory card (short but still), some control/interface issues (saying stop to a blind mudokon works when they're still but not after telling them to follow you (have to use "wait" only here - wtf), have to stand to the side of a lever to pull it - can't stand in front of it, CPU allies following you tend not to understand if you're at a different height, unforgiving hit detection on platform switches when CPU allies are walking over them, sometimes trying to talk to a single mudokon in an idle group doesn't work (they all respond), the game should've shown available speech actions while holding L1 or L2 instead of making you go into the menu to check if you forget a command (alternatively they could've made some actions context sensitive, on PC speaking is slightly simpler as more buttons are available) - more commands means it takes longer to memorize them and it's even more tedious when possessing creatures and speaking using them since you can't hear them saying the words and have to browse through sub menus to check, tile-based movement (basically each step is locked to a grid and you can't take half a step or stand still between the tiles on this grid) and some delay when turning around while walking, fall over from running into walls and doors, no "go back" command if you accidentally picked "follow me", holding down jump will make Abe keep jumping but holding down throw won't make him keep throwing, the rolling text style tutorial messages aren't as effective as a manually controlled text box, ), getting 100% is pretty tedious (backtracking, several situations where you have to repeat actions over and over to save everyone or traverse screens with a lot of mines in them), no difficulty options, unskippable bootup logos (10+ seconds), some plot conveniences (your friends being really gullible about drinking the soulstorm brew and not listening to Abe's warning despite him being a hero at this point), sometimes hard to spot things in the background (pretty rare though), some dead space (beginning of level 2), kind of tedious leech segment in level 2 (too many of them), no "checkpoint reached" notification (added in the PC version),