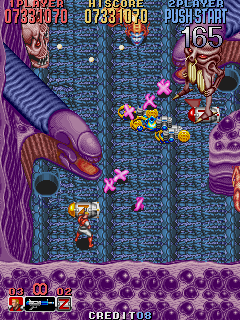 ​
+ 3-player co-op (check the options), mixes top down run 'n gun with pinball gameplay (levels look like they partially take place on pinball boards and feature some appropriate gimmicks, at one point per level you can temporariyl transform into a ball and knock things over by picking up a power up), smart bombs (pretty rare), some large and detailed sprites, good bosses, one or more optional timed challenge in each level (often similar to a mini-boss fight, you get a lot more points and sometimes power ups if you finish them), optional paths in some levels (need to unlock them - sometimes not intuitive how to do it), levels which scroll in more than one direction (Mercs), difficulty options (four levels, number of lives, coin worth), pretty impressive FM music (YM2151+sampler chip), pretty nice artwork between levels, shows bosses' health bars,

+/- Short default weapon range, timed special weapons (similar to Fantasy Zone - the timer (20 secs) is increased by picking up more of the same weapon), jackpot mini-game (seems hard to win at), smaller average sprites size, can't move backwards in the levels, no alternate chars to choose from, level timers (not too bad but you need to keep moving), cutscenes are decent but have a very limited viewport for some reason, one hit kills (no shields or armor upgrades), four different special weapons (missile launcher and flamethrower are very similar though), borrows some elements from Smash TV, no grenades or other volley attacks, no prisoners to rescue, features various Data East character cameos in the ending (Joe & Mac, Karnov, etc.), respawn on the spot (lose your current special weapon and all bombs though you also gain two bombs)

- No auto-fire, no dodge or strafe moves (leads to more trial & error and having to rely on smart bombs more), trial & error (boss patterns, you're supposed to knock enemies into the holes you can find in some levels by shooting them when they're near them to be rewarded with smart bombs - not explained), the ball mechanics seem a bit underdeveloped (short timer on the transformation, can lose it by getting stuck trying to move into tight spaces near the edge of the screen, not that strong as an attack and there are no paddles to give you a boost - there are some paths which move you automatically through them and at one point you're locked into a railroad route of sorts with a few alternate paths to choose (both similar to some level gimmicks Sonic) but these segments are very short), shooting at low ground enemies from above or vice versa only sort of works and only if they're close to you, sometimes kind of generic visuals, pretty short (~20 mins spread across 5 levels), some slowdown in 3-player mode, difficulty spike at the fourth boss (very hard to dodge its main attack),
​