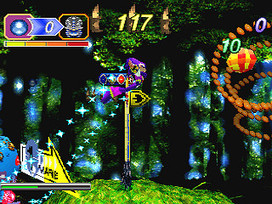 + Innovative gameplay (part air racing with collecting and fighting enemies, part (so-so) platformer, spinning as Nights creates a force field which sucks up collectables), unique atmosphere and premise, three gameplay modes (hover racing, platform collecting, boss fights/puzzles), good art direction, memorable locations (mystic forest), wide screen, two 'campaigns' - one for the girl and one for the boy, pretty fast paced, one of the first console games with analogue controls, instant replay after beating a world (no camera control?), ranking system (A-F per course, four courses per world, then one more for the boss fight) which sort of works as a metaphor for the kids' confidence, go through multiple ring sections quickly to get combo points, do 'stunts' in power loop mode (yellow trace) for extra points (do different sized loops and press the L/R buttons, pretty shallow but still), hidden routes and items, decent intro (the second one, showing the dreams of the kids), the nightopians (NPCs which can breed and be made happy (move carefully near them) or be killed making the others angry) - depending on their mood and how many there are the music of a level will change (four moods per level), the game doesn't explain too much about Nights and his/her world, 2-player vs. mode (not sure if good), nice twist at the end (the girl or boy finds the confidence to fly without Nights and rescues Nights with the other kid)

+/- When time runs out you're transformed back into the girl/boy and have to collect the blue/gold spheres which scatter around you - then destroy the pod containing one of the four coloured special spheres and return it to Night's pod (there's no time limit here and while you're chased by an alarm clock it's pretty easy to avoid and these segments end up pretty boring and sluggish to play - would've been better if you could just restart the course you were on as Nights or if the arrow pointing to the scattered spheres instead pointed to Night's pod so you could go back and retry the course), player select defaults on the girl, you need to figure out how to rank higher on your own and it's not exactly intuitive, game takes you to the main menu after beating a world/dream (odd), can't directly choose to retry a world or course (can go back to the title screen, savegame loaded, by pressing A+B+C+Start but this means you have to restart the entire world and redo the intro scene (where enemies steal the special coloured spheres) before you transform into Nights), you can collect spheres as the girl/boy before freeing Nights to give you a head start (not that fun to do though), play as Nights the genderless jester/aero acrobat, no checkpoints in the final world (except for before the boss fight), although the shown timer doesn't stop until you get to Nights in the beginning of a Dream/world a hidden bonus timer starts right as the kid gets up from the monsters' robbery and reduces points for releasing the Ideya (coloured sphere) on that course (keep in mind if trying to get beat the highscore)

- Course maps can only be accessed in the title menu and they're pretty vague, trial & error (some blue/gold spheres (set free the coloured special spheres) require doing a spin move around stars (give points) to make them appear, track layouts and some bosses can be confusing and/or disorienting on the first go, the main mechanics aren't shown immediately but hints are handed out if you fail, shots from off screen, boss battles), very sensitive hit detection as Nights when moving into some slopes/background walls, slow movement when playing as the girl or boy, dithering instead of transparencies (might look better on older TVs), can't simply let go of a grabbed enemy or block - must bounce off of it (small enemies can be destroyed by fully rotating around them though), some pop-up, sometimes garish colours, some invisible walls (final boss, first boy world when the perspective changes to bird's view), unresponsive and odd controls in some of the rail shooter-like segments (sometimes inverted?), pretty easy final boss, need a C rank to get to the next level?