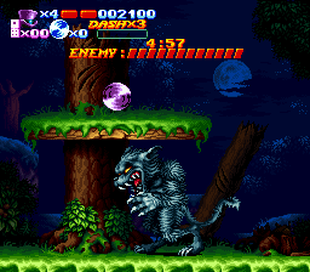 +/- Can't move while ducking, invincibility time during and after the chargeable dash attack and while charging it (when it's near fully charged, auto-activates after a few seconds but still, can be used in mid-air), dash move (no invincibility time though), items disappear after a few seconds, enemy drops disappear if they leave the screen at all (happens when they bounce upwards off screen here and there), near constantly spawning enemies coming from both sides in many segments, starts out pretty tough, several points only items, limited continues regardless of difficulty, respawn on the spot but with no bomb or dash replenishment until you use a credit, no intro, fairly easy to gain extra lives (100 dice per life), no control options (not really needed though), boss gauntlet for the final level,

- Somewhat slow movement and jumps, no jump height control, get knocked over for a bit each time you take a hit despite having 2 HP, no auto-fire unless you use a cheat code, can't shoot diagonally unless you have the blue double shot, no weapon inventory and you can't wait for or shoot at a weapon to make it change, the "blast" icons don't do anything?, loading times before bosses (5+ seconds), some dead space (particularly in the beginning part of level 4), trial & error (a bit hard to tell what will hurt you in the fiery segment of lvl 1, boss patterns, shots from off screens, some traps, very cheap falling segment in lvl 3 where you can't use the dash properly), uneven difficulty (very easy first boss, very hard to dodge the second boss (werewolf) normally), no "level complete" music, somewhat forgettable music overall, somewhat short (5 levels, ~35 min if you play well in 1 player mode), repeats the first boss without making it harder, no fourth level boss, lame ending,