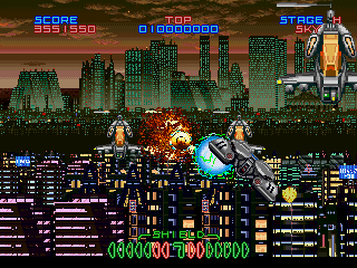 
+
Pretty much arcade perfect
Adds an Extra Game mode (6 remixed levels and higher challenge)
Hybrid vehicle avatar (car and flying car)
Branching paths between levels (Darius-style with different final levels and bosses)
Difficulty options (five levels)
Control options (reverse, normal; auto-center (like Space Harrier) on/off
Recovery level (sets how many HP (1-3) you'll recieve after a beaten level - can increase it above the default 5 to 8+, wasn't in the MCD ver.))
Adds an extra CG intro (looks decent for the time and features a good arranged version of the main theme which is different from the MCD one)
Quick briefing screens before each level (shows a pic of the boss and its name)
Fast movement
Water splash effect when flying near water and skidding effect when touching tunnel walls or roofs, decent intro and ending cutscenes, multiple endings (some of them are funny in an over the top serious way and there's some engrish in several of them), slopes and tunnels (Out Run), moving wall hazards (later used in Panorama Cotton and Star Fox), smooth scaling, optional auto-fire,

+/-
Health bar/shield (5 HP)
Fast loading times (~2 seconds between levels - would've looked better if the game didn't pause though)
Respawn on the spot
Limited continues (just 3 on Normal)
Your car gets knocked back/off course a bit each time you're hit
Short levels overall (some on the rightmost path are a bit longer)
Partial health recovery after each boss (1 HP)
Vaguely cyberpunk aesthetic (the music is more jazz fusion/synth prog rock with some 90s dance elements though)
Transform into a mech for some of the final levels (cool but makes it harder to see hazards and makes you a large target) - in another your car is destroyed and you fly around like in Space Harrier instead which plays better and in yet another your car is upgraded into a ship with a stronger weapon (stage T)
Some levels share tilesets
Buildings are still just flat surfaces (see Batman Returns)
Easier sea dragon bosses than in the MCD ver., vertical movement is a bit slow (makes it less safe to move up and down without knowing the levels),

-
Doesn't include the rearranged MCD version of the OST
The save feature only seems to save your options config and score (no unlockable level select?)
No alternate weapons or main weapon upgrades except for the final level on some paths (stage T for example)
Pretty repetitive (some bosses are variations of previous ones such as the stage P/factory boss)
Voice samples are a bit muffled and low volume overall
Time limits on boss fights (~20 seconds?)
Some trial & error (Stage K beginning, various boss patterns, some segments with a lot of background hazards)
Some typos in the ending texts
Sometimes uneven difficulty (easy tunnel stage bosses and stage H (Sky) boss for example)
Shorter draw distance, no new ending for the Extra Game mode, can't shoot up or down (could've made gameplay a bit more interesting)


Notes:
-Ports comparison: https://www.youtube.com/watch?v=3YfXsFxHu4Q
-Arcade original is from 1989
-Beat the rightmost path as well as the T/Suburbs final level and the Extra Game mode
​