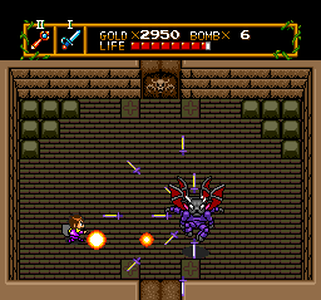 ​
​+ Zelda 1/Golden Axe Warrior-style gameplay, wing item (one use per wing; teleport back to where you last got a password, close to healing spots but only early on - makes the beginning more accessible than in Zelda 1), save feature (four slots, also has a password feature (given by the same NPCs)), block projectiles with your shield, armor and weapon upgrades, other shortcuts/warps?, pretty good translation (sometimes odd script though ("I am a gentle old man")), decent bosses overall, have an all-use compass from the beginning, ring item (transform stronger enemies into weaker ones), 8-way attack using the fire wand, higher coin carrying capacity than in Zelda 3 (9999 coins?, bomb capacity progresses about the same as in Zelda 1 though),

+/- Less linear structure (2 medallions per sub world instead of having all of them in the same one, you're also better off doing most of the dungeons in the recommended order first time around or you'll be missing items and/or facing difficulty spikes), get teleported back to the beginning shrine after beating a boss (can help with some backtracking but the saved restore point for the wing item also changes to the beginning shrine so there's still plenty of it), dropped items disappear fairly quickly, overpowered stop watch item, it takes a long time before you encounter the first shop unless you know where to find one, more directions and hints given than in Zelda 1, can't move and attack at the same time and there's some movement delay after attacking or using bombs (can't cancel out of an attack either), 4-way movement (feels a little dated though it's still a late 80s game), doesn't follow the one new tool item per dungeon formula from Zelda, ammo-based sub weapons (not the fire wand), more cases in the overworld where you need to kill all enemies on screen to reveal a hidden passage, off screen enemy respawning, need the manual for some item descriptions?, your bomb blasts don't hurt you, gameplay pauses while in the inventory, fire wand projectile depends on how much life you have left (having less life can occasionally be useful, no way to manually switch), boss room keys, doesn't show bosses' health, you always get knocked backwards even if hit from behind or the side, can revisit beaten dungeons (but not refight the boss), ​side quests?, towns?,

- No overworld map, rips off Zelda 1 a bit too much (dungeon and enemy design, first boss, ladder, burning bushes), tougher enemies aren't more likely to drop an item, enemies keep dropping items that you already have a full supply of, somewhat unforgiving hit detection when attacking enemies (narrow sword hitbox, smaller bomb hitbox than it looks like), no wide sword attack?, no attack bonus or alternate attack when at full life?, somewhat generic look at times (regular enemies, most areas), can't examine or interact with objects in houses and houses are oddly empty and always one screen in size, can't name your character, can't speed up text on a per paragraph/message box basis, can't talk to an NPC again to review a message without re-entering the room/building, no message log/journal feature, annoying beeping sound when low on health, trial & error (can burn down rock/crystal pillars, bombable walls lacking visual/sound/dialogue clues), repeats enemies (enemy behaviours) and backgrounds a lot?, can't bomb bushes or trees, the dungeons all look pretty much the same and use the same music track, second boss is easier than the first one, some grinding for ammo and money, many enemies don't drop anything, need to re-enter shop caves to buy additional items (at least they have two of each, only a problem with bombs?), backtracking for shops (no shop has more than one item type?), tediously resilient third boss, you'll pick up potions from chests even at full supply (wasting the potion), some really vague clues?,

Notes:
​-Played up until the third sub world (islands)