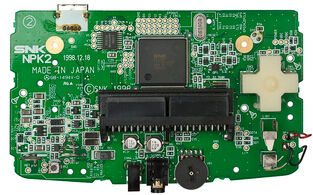 A PSG chip which is very similar to a 2x SN76489 setup: 6 (?) square wave tone generators and 2 (?) noise generators with stereo capability + direct access to the two 6-bit digital-to-analog converters. Click the image for a link to a page with more info.​

The wikipedia info on the chip is partially incorrect, the noise channel can play in stereo (and the panning is more advanced than just left/mid/right hard panning - see for example Strategy, Path of the Fighter or Fatal Flaw from SNK vs. Capcom: Match of the Millennium).

Another thing that was barely used is periodic noise mode, which sounds similar to a saw wave and could be used for bass - one rare example of it being used can be found in Game Over from Sonic the Hedgehog: Pocket Adventure.

The 6-bit DACs were never used in conjunction with the "SMS" parts of the chip as far as I'm aware, but a couple of games that used them for music are Faselei! (streamed vocal intro track) and Ganbare Neo Poke-Kun (short jingles independent of the PSG music).

The only other things of note that I could find are a raspy noise-like effect used on the pulse channels in certain tracks (reminiscent of certain Spectrum OSTs; see for example Activation, Tyranny, Gouki's Theme, Annihilation or Dan's theme from SNK vs. Capcom: Match of the Millennium or Wily Capsule from Rockman Battle & Fighters). There's also some nice pulse channel percussion in Geisha!! Final Match from Big Bang Pro Wrestling and in First Contact from Metal Slug: 2nd Mission.