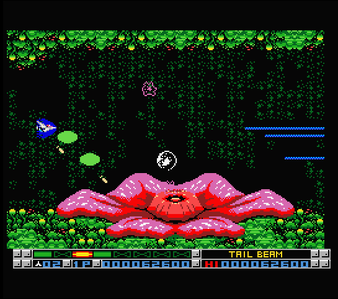 + Four different player ships and each one has some customization options (two different shield types, three gun drone/option formations - up to 2 drones at once), good variation, pretty impressive music (SCC chip), animated background elements, large and detailed bosses, background hazards, decent cutscenes (some story exposition in-between certain levels, pretty good ending), boss explosion samples, some interesting level design (gravitational fields in level 3, sand waterfalls in level 6, parts of the interior being torn off and flying towards you in the green base level), smart bombs (rare though and they trigger when touched), hidden items (there's also a hidden item radar but it appears after three of the four hidden items (green base level) and it's pretty much needed to find the items), two endings, upgradeable laser (moai level, level 6, level 7?) - with three upgrades you have pretty great firepower shooting in three directions at once, some multi-jointed sprites, extended play/new game+ (can't save after beating the game though),
Enhanced hack: Smooth scrolling, better ship graphics (can be changed during gameplay by pausing), game speed options (three speeds, can be changed during gameplay by pausing), optional voice samples, less slowdown?,

+/- Unlimited continues?, Gradius 1-style weapon system (distracting when things get hectic, fairly easy to miss the power up you want when things get hectic, can't slow down an overly fast ship), checkpoints (see below), re-uses level assets and enemies from the Gradius games, can't change gun drone formations in-game, the shield won't protect you from hitting a wall or ramming a boss, 2-player alternating, need to input a code to select difficulty (F1 then "hard"=easier, "extend" makes the shield last twice as long - doesn't work?, "good"=harder) and it only seems to affect the bosses’ health,

- Very slow auto-fire and somewhat few shots on screen at once, no manual speed adjustment, very hard to recover after death a few levels in (lose all upgrades, can't re-grab the drones like in Salamander for example), often unfair checkpoints and getting a game over doesn’t put you back at the beginning of the current level (for example in level 3 you don't have a chance to upgrade much if you die at the boss, in level 5 you don't get a chance at all if you die at the end of the cave), starts out quite hard, trial & error (the one shot mega laser in the last level - cool idea though, need to find the three hidden map items to get to the final level (the game takes you back to the relevant level if you missed an item though) and then the extra shield system item to get the good ending, level 3, end of level 5, knowing what weapon to use when, etc.), unforgiving hit detection around enemy bullets and the moai heads (pretty sure you need a shield in some segments), some slowdown, choppy scrolling without the patch, easy final boss,


Comment:
Prime example of high difficulty pretty much ruining an otherwise great experience for me. There's apparently a cheat that lowers it but it only makes bosses have lower health it seems, and the shield extension code doesn't seem to work.
​