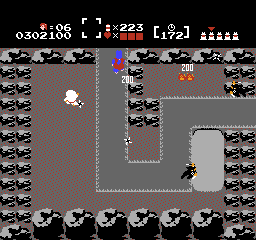 
​
+ Sub weapons/special items (temporary invisibility/invincibility, smart bomb, ), weapon and movement speed upgrades (triple shot, fire shot etc.), context sensitive melee attack (sword slash), some interesting enemies (kamikaze ninjas, mine layers, samurais that block your shots and have to be hit quickly as you near them and they raise their sword), good enemy variation, fast paced, terrain effect - shallow water (makes you move slower until you find plateau shoes), many hidden items, bosses sometimes appear before the end of the level (similar to Shinobi), block weaker enemy projectiles (shuriken), some good bosses (teleporting clone guy), almost no flicker despite many sprites on screen at the same time, pretty good build-up before the final boss

+/- Ammo limit on stronger weapons, medieval japanese setting, minor loading times, time limit (becomes a problem after a few levels due to there being no map), fall over for a second or two after every hit (3 HP per life), no strafing (blocking helps), some (muffled) voice samples, quickly respawning enemies, unlimited continues?, maze levels, can't move or attack diagonally, can walk out on bosses (occasionally a good thing if you die at a boss and didn't get the good upgrades in that level already), treasure mini-game in-between levels (pick the wrong one and it stops - pure trial & error), frequent checkpoints

- No map, lose all upgrades after death (need the movement speed later on, the checkpoints become an issue at times), sometimes hard to tell where you can and can't exit a screen, trial & error (weapon downgrades, no visual or other clue for many hidden items (can only find them with the melee attack), some cheap attacks as you enter new screens or as some enemies teleport in, later boss patterns, red water traps - stunned for several seconds without shoes), some slowdown, slow rate of fire, short invincibility time after taking a hit, gets repetitive after a few levels

Notes:
-Can't reach the final boss in Nestopia? - Glitches out after the second to final one