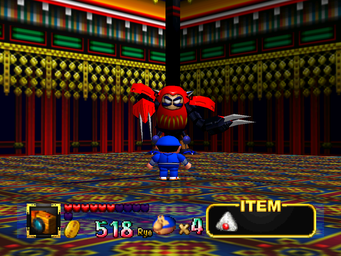 ​
​
+ Plays like a more straightforward Zelda game w/ manual jumping (minor puzzles, exploration-based but gated, some persistent tool/spell-based progression (most are borrowed such as bombs and high jump (Metroid)), split town/dungeon (castle) structure, shops, basic stat upgrades (HP and attack power), fewer tools+puzzles and more action-focused bosses?), bizarre/silly humour (sit com, slap stick, Japanese), mostly clean and colourful graphics with decent animation, map system (semi-transparent mini-map of the current sub area in towns and overworlds but not in dungeons; no full overview map of towns/the overworld while there is one you can find for dungeons and overworld/journey areas (however it doesn't show your avatar's exact location)), four different playable characters that you can switch between on the fly (they control mostly the same but only Ebisumaru and Sasuke can attack upwards (only while crawling as Ebisumaru though) and each one has a different set of weapons and a unique spell, each one also has a special move or tool, ), can block enemy projectiles using your own (coin throw) or with Yae's sworld shield move, mixes in other gameplay styles (auto-scrolling large robot/impact bomber level - shallow and trial & error heavy, large robot FP view boss duels - pretty good), crawl move, basic attack combos (press attack three times, TMNT/Golden Axe?) and charge shots (Shadowland?), teleport to visited towns with the flute (Ys, Zelda 1 sort of) but not outside of dungeons, 3D grappling hook (works like in Zelda 3), can cling to and climb ledges (Z; sometimes inconsistent?), some interesting spells/tools/attacks (gain healing items from enemies by using a certain weapon (meat saw-hammer), camera item lets you solidify ghosts and see hidden objects (similar to Zelda/Metroid), mini-form as Ebisumaru (Wonder Boy 3?)), underwater swimming/mermaid form as Yae, freeze shot - Sasuke (MM1/Metroid, can't stand on most frozen enemies here though), some interesting mechanics (dynamic movement - tap to tiptoe/tap harder to walk/press fully to run mechanic (Tomb Raider?), can lock onto enemies but only with Yae's bazooka (similar to Tomb Raider except you can't circle around the enemy and have the camera lock onto it here), weight-sensitive floating platforms in the second dungeon - later used in OoT), three vocal tracks in the OST and in the JP version the intro is voiced, a few mini-games (stealth (avoid being seen when taking the sweets in the golden temple, crane game - similar to Link's Awakening, whack-a-mole variant (muscle training), ) - decent overall but generally one time only, some memorable locations (the submarine dungeon), can unlock a giant robot duel mode boss rush (collect all silver dolls/HP upgrade pieces),

+/- Shared HP and gear for all chars, mostly linear structure (some backtracking to explore further into previous areas with persistent abilities gained along the way), no 2D sections, thieves in towns (can take back some money by hitting them but after that they speed up), save points (inns and outside dungeons, one slot per game) and a few health restoration points (hot baths), no strafe move and no dodge move, 9999 max money capacity, extra lives system (9 max), deteriorating armor items, can swim up some waterfalls but not others, dropped items disappear after a few seconds and placed items tend to respawn when exiting the room/sub area (enemies also respawn), buying a better "health restorative upon death" replaces the one you already have, can't listen to the golden temple priest's sermon for some reason, sometimes inconsistent slope physics (generally you slide down like in Mario 64) - rare though, can't shoot the chain pipe upwards nor downwards, unskippable cutscenes (not many though),

- Camera issues (sometimes ends up behind a wall in narrow areas or when entering a new room, limited player control (can only sort of rotate it halfway, zoom in/out, look around while stationary in TP view), hard to judge distances when platforming, auto-adjusts slowly to a behind the avatar view while moving around or stationary; all this leads to cheap hits), tons of dead space (can't run very quickly), some control/interface issues (no quest log/journal feature, somewhat picky chain pipe/grappling hook controls - could've used a lock on or at least an "aim while stationary" mode, some text can't be sped up - most story-related dialogue), trial & error (making kihachi appear, some overly tight platforming even early on and several areas where if you fall you'll have to backtrack a bit, traps, enemies out of sight when entering a new room, you'll sometimes miss a piece of NPC dialogue if you pick the wrong dialogue choice though it's never obligatory info, a few cats (HP upgrades) are easy to miss and lack a clue to their location), ), enemy designs are less detailed and memorable than before, the game doesn't pause while picking up a silver cat doll (leads to some waiting for moving platforms), no proper signs outside town houses (some have untranslated japanese ones) and so-so object interaction inside them (there are also some invisible walls inside houses as well as between a few buildings and walls), some tedious platforming (falling down leads to replaying large sections), slow swimming except underwater in mermaid form, some dated looking 2D elements in the visuals and mostly blurry textures, 1-player only, some meaningless dialogue choices, boring fish catching fetch quest, tiptoeing is painfully slow but rarely used, resting at inns and 1-ups aren't worth the money, some lame jokes and the laugh track can get on your nerves, annoying button mashing mini-game to get the mermaid form (have to mash pretty fast while avoiding very quickly moving objects, required), signs tell you when to use the camera rather than the level design hinting at it, fairly easy final dungeon 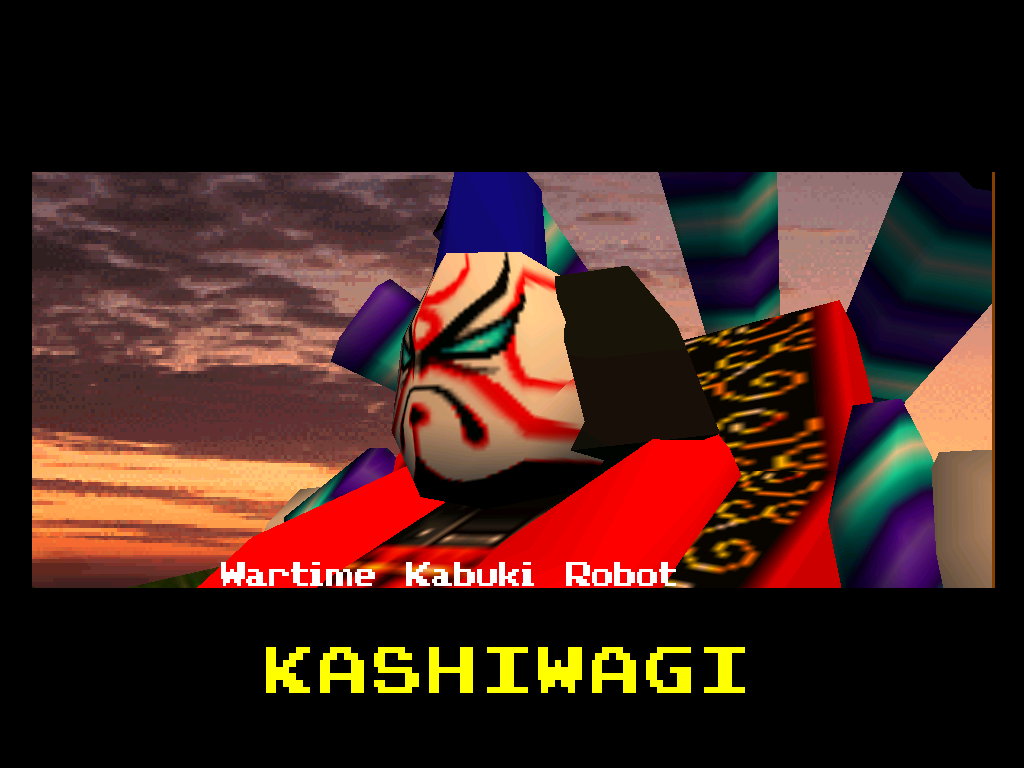 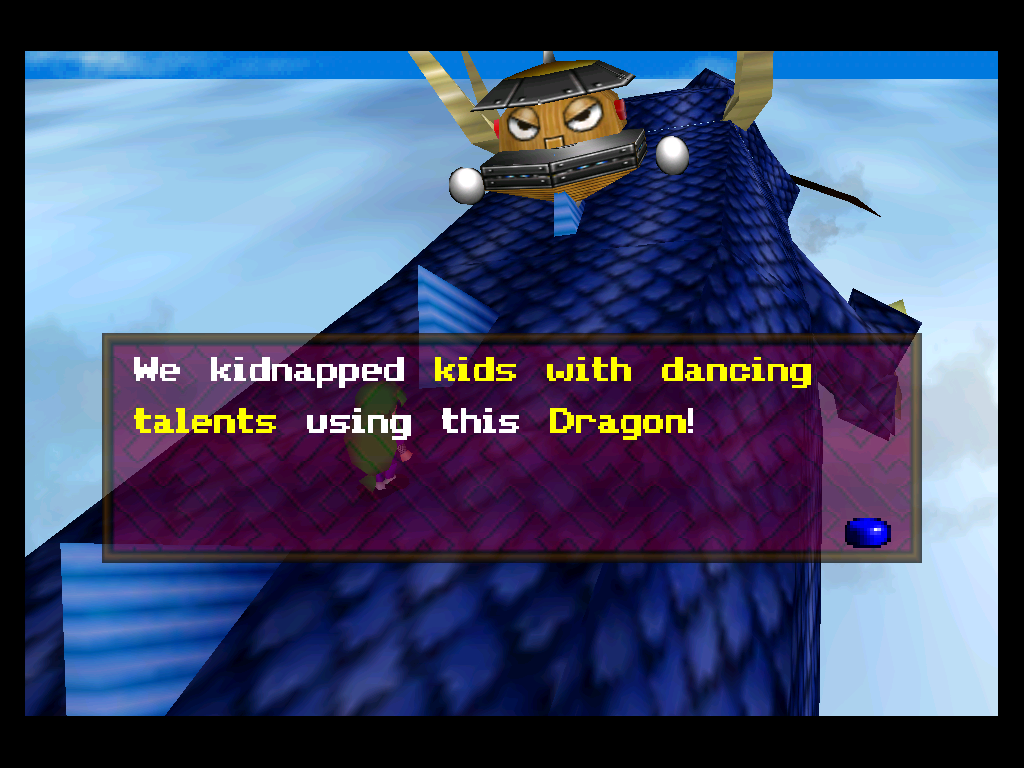 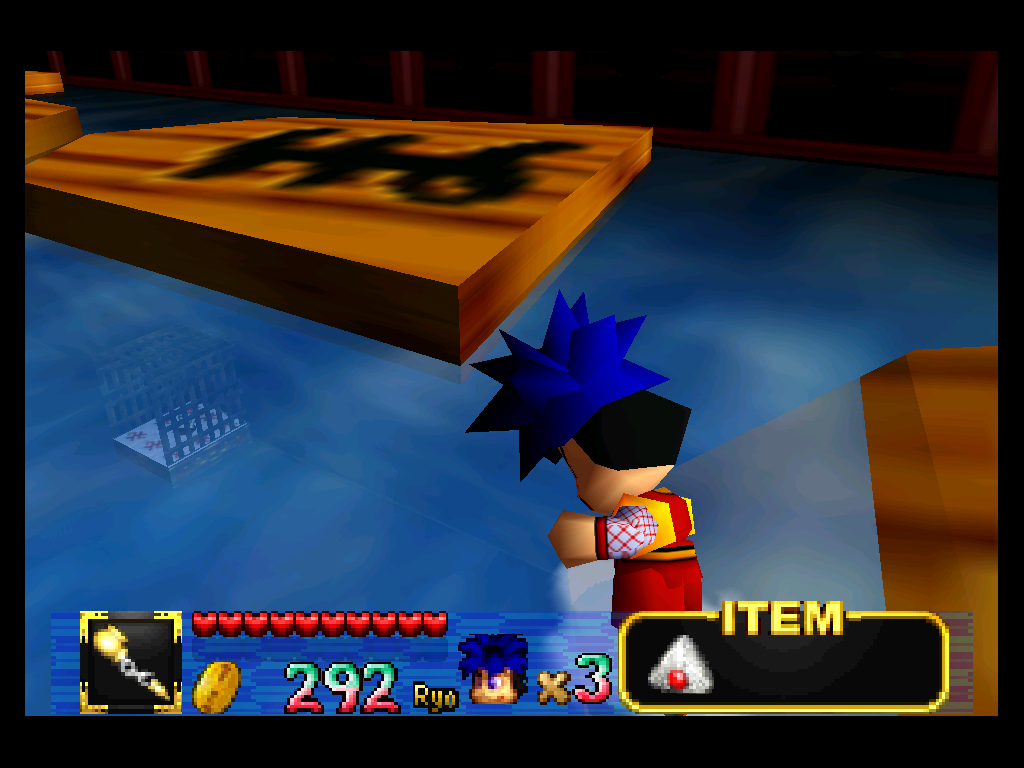 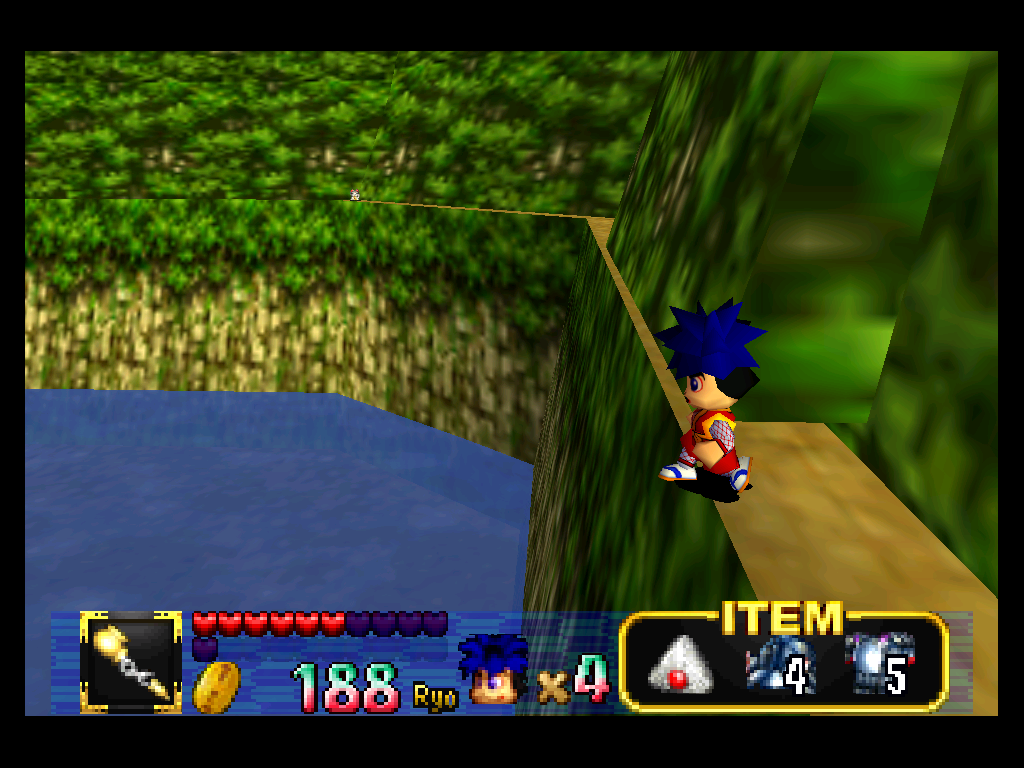 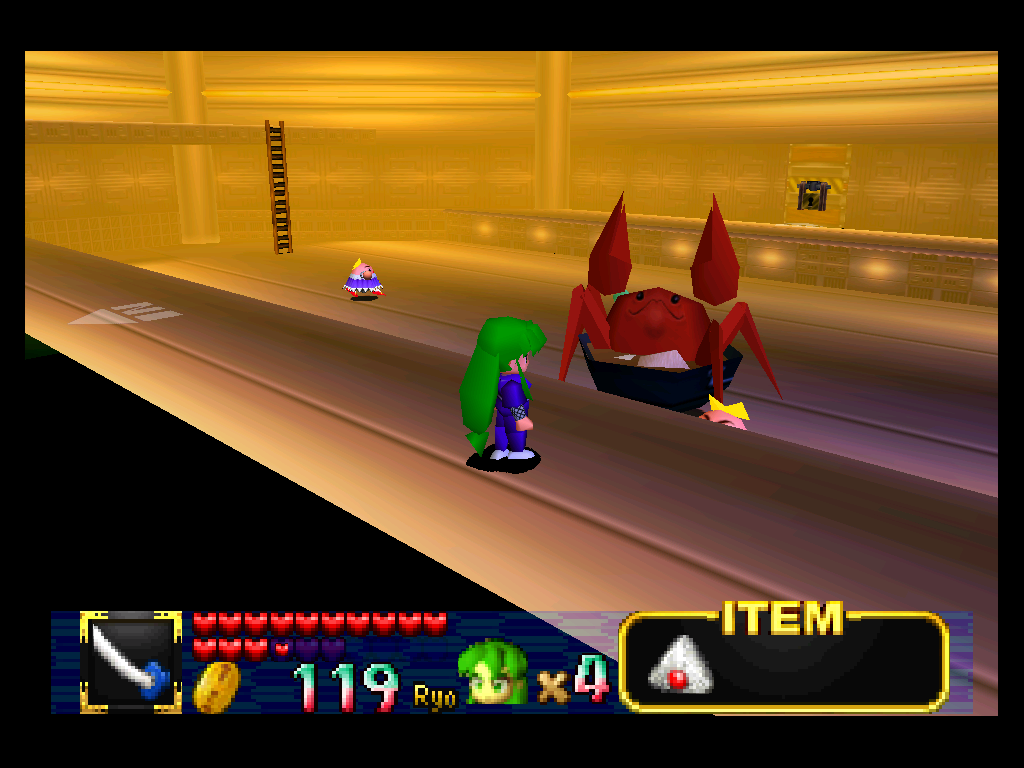 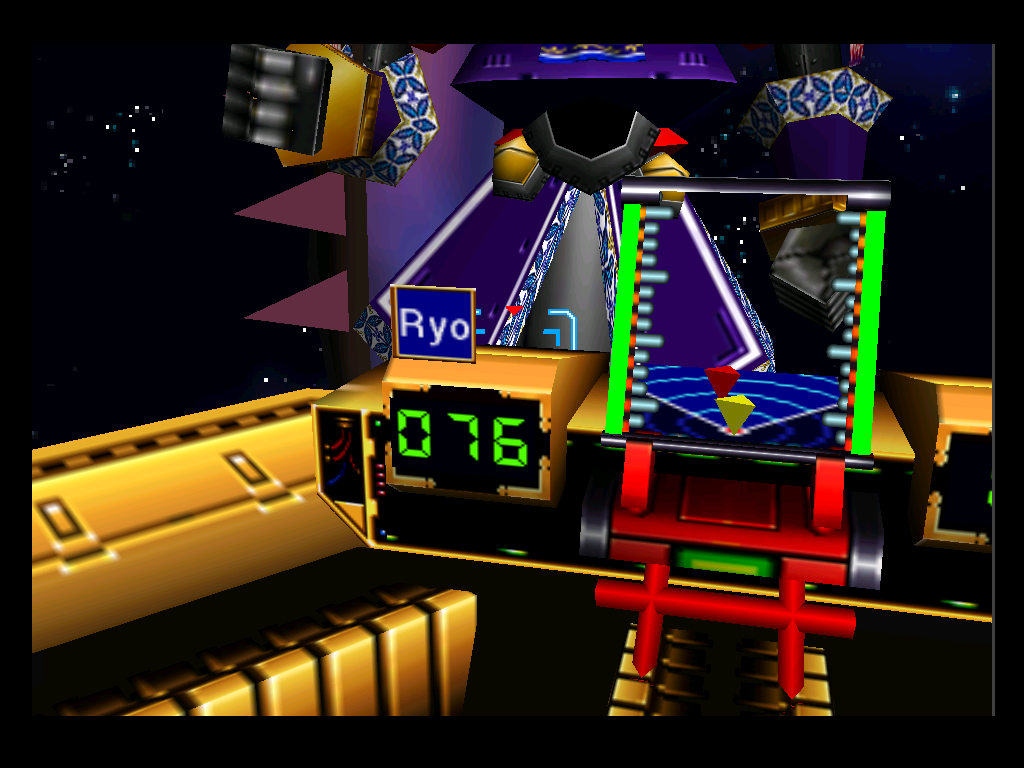