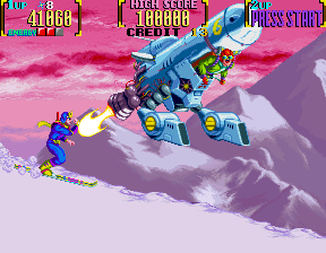 +/- No invincibility time during roll move (can roll through most enemies though), no HP refill after bosses, can't shoot or move horizontally while doing a high jump (up to a balcony or higher platform like in Rolling Thunder or Shinobi), can't shoot directly downwards without jumping, several auto-scrolling segments (skiing in level 2, log riding in level 4, cart ride, elevator; first two are fun and the others OK), no level select or alternate paths through the game, auto-fire as an upgrade, can destroy smaller projectiles with the melee attack (rarely useful since it's hard to predict when a slash will happen at the right time to block something), short invincibility time after picking up any item (can be used to avoid some damage), respawn on the spot after continuing (pretty hard to recover later on since weapon power ups are somewhat rare and don't appear during boss fights), no alternate weapons (the characters have somewhat different attacks though), no bonus levels?, items disappear after a few seconds, loops once on default settings (you still see the same ending after the first loop and it can be turned off),

- Loose scrolling (if you keep holding right you'll end up at the edge of the screen though it takes ~5 seconds - mainly a problem if you use the roll a lot; probably done to balance co-op mode but could’ve been removed from single player), some control issues (minor delay before moving after landing from a jump, would've been better to have the roll move mapped to its own button (can get in the way in downward slopes), can't start holding the fire button before a roll move is finished when at full power (should work since you have auto-fire), can't stand still while aiming (see Contra: HC or Gunstar Heroes), can't cancel a melee attack to roll (can't move while doing one either), safe spot at the first boss (just stand below and slightly to the side while shooting - the forgiving hit detection makes him keep shooting while missing you), huge knockback, some typos, trial & error (boss patterns, certain mechanics, ambush attacks, easy to miss the weapon upgrade before the "good loser" boss - if you open the container before the fight begins the cutscene will be long enough for it to disappear before you get to it), uneven difficulty (fairly easy first three bosses, a bit of a difficulty spike at level 4, invincibility time during high jump and jumping down through a higher platform animations makes some bosses much easier, no damage or knockback from walking into humanoid enemies also makes some boss fights much easier)

Notes:
-Layer glitch in the airplane level in MAME (the foreground doesn' disappear in the first screen when boarding the plane),
-Most character differences (kojiro/big guy can reach the log mini-boss and the train boss with melee (keima/kabuki can't), kojiro and keima have slower rates of fire overall while brad has it at weapon level 3 but he can also reach the train boss, yuri can't reach the train): http://www.ign.com/faqs/2010/mystic-warriors-walkthrough-368773