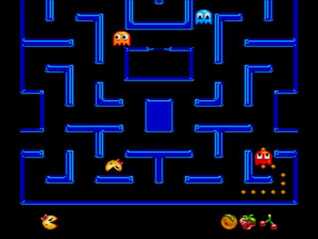 ​
+
Some optional gameplay additions (2-player co-op/vs/alternating options, speed booster/pac-booster option (always on or toggled), 4 different maze modes (arcade, "strange" - adds minor deads and large rooms here and there, big, mini); same additions as in the NES ver.)
​Difficulty options (4 levels)
Fast paced and eventually pretty intense
Selectable starting level out of the first 7 from the get go (then whatever you've reached after a game over)
The enemy AI still holds up pretty well
Minor visual improvements (mainly for the sprites), cute cutscenes in-between every other level (skippable)

-
Repetitive (more so in arcade maze mode where each maze layout repeats three times) - they could've added more Obstacles/hazards/enemy types to some maze modes
Only 3 continues (normal and easy) - it seems you gain them over the course of the first few levels but I'm not sure how it works
Pretty basic sound and no option for in-game music
No "level begins" jingle plays after the first one - emulation issue?