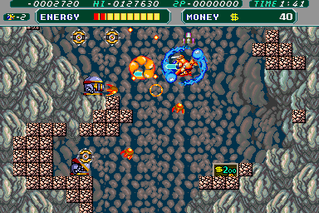 
​
+
Good variation (except for the repeating cave segments)
Fantasy Zone-like gameplay (manual scrolling here though)
Dig out and collect crystals to use as currency in 'shops' scattered over the levels (really they're power ups with a price tag on them) Some tactics involved in getting the most crystal/money out of a level
Some hidden items
Sometimes interactive environment, difficulty options (no easy mode though), shield power up, upgradeable weapons (homing rockets (when in the air), front laser, bombs (when on the ground)),

+/-
Negative power up (the fish - releases all crystals and shatters the big ones)
Gain extra lives by collecting points (you won't receive that many in a normal playthrough)
Infinite continues
No smart bombs or alternate weapons
Caves start out pitch black until you find the way out of the first room (seems like they could've done more with this idea)
Obvious divide between the diggable and non-diggable parts of the environment, has a darker tone than Fantasy Zone (more akin to R-Type)

-
No auto-fire
Trial & error (some things kill instantly, the wall traps in the final stage, easy to miss good money since the screen can't be scrolled backwards, boss and enemy patterns, your ship is a bit slow and the speed can't be increased)
Can't lock your ship in one direction (would've been good for some bosses and other situations)
Need to be on the ground to switch to bombs (can't use rockets when on the ground - leads to difficulty spikes)
Uneven difficulty (don't get to keep any upgrades or money after death, frequent checkpoints, the 'orb' boss and the final boss require very specific patterns to beat)
Some annoying sfx/instruments