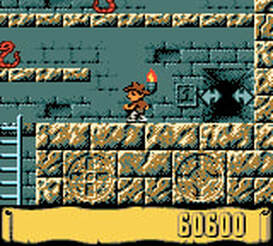 ​
+ Decent map system with auto-mapper (shows the layout of each layer, shows only used room exits (except for doors between layers which aren't shown at all) and which rooms give you a password when unlocking the door in them (only one at a time, these guide you to the next sub goal like in Metroid ZM) - leads to having to memorize exits you didn't take while exploring, doesn't show the layout of each room though nor locked doors or items in them), pretty good animation, minor puzzles (need to think about how to navigate rooms due to limitations like not being able to jump past poles), temporary shield power ups (used when picked up though and don't protect against most traps so they're not that useful), layered world (Goonies 2), spiders can climb ropes and ladders, torches to light up dark rooms (no light effect like in Zelda 3 for example though), some large sprites (bosses), can escape from boss battles and they don't replenish their HP,

+/- Partially non-linear (can't move between layer 2 and 3 without doing something?, some gating via locked doors and key type items, fairly open-ended level design), limited inventory (5), symbol coded rather than color coded keys, single HP avatar/one hit deaths - if killed by an enemy then that enemy also dies though, weapons are still single use only and used automatically by moving into enemies, can't move while crouching, can't jump onto nor off of ladders while you can do it with ropes, can jump higher than it looks in narrow spaces, extra lives system, frequent checkpoints (every room), more zoomed in view with scrolling here, password save (only given when opening certain doors which though are rare, pretty short), burning ropes respawn when re-entering a room, enemies don't respawn, optional collectathon element (points and extra lives, however this focus leads to several dead end rooms and paths if you're not interested in collecting the gems),

- Repetitive after a while (no alternate weapons, no new tool items, few enemy types overall, few and near identical bosses, no stat upgrades or gear upgrades), trial & error (you'll sometimes run into pretty challening detours that don't lead to anything useful (usually more gems) where you can't see what the reward will be before attempting them, some leaps of faith (can't look up/down), can't grab nor let go of a ladder overlapping two platforms from the lower one, can't jump off of poles, die from falling more than about half the screen's length), some control issues (can't grab poles all the way down - can lead to missing jumps, no mid-air (when jumping or falling) or jump height control, slow upwards rope climbing, inconsistent hit detection on some platforms (can jump up through some platforms but not land on a solid platform and stand in front of one of these platforms), game is somewhat picky about positioning when trying to climb ladders), backtracking (no teleporters?), a bit tedious to have to leave and come back with more knives to bosses to beat them, pretty lame ending (congrats screen), some grating parts in the OST and most of it doesn't quite fit the mood of the visuals (at least there's a decent variety of tracks),