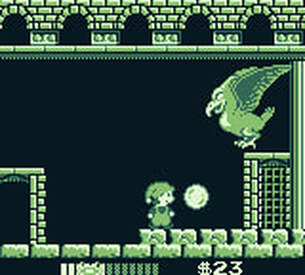 
​
+
​Buy items and healing in shops with money collected in the levels (can also get clues for free)
Decent bonus levels (grab notes that bounce up and avoid the b's - these get converted into money, hidden)
Life bar upgrades (honeycomb item)
Weather mechanic with an effect on gameplay outside the castle (lightning storms)
Jump shoes (these actually activate spring blocks in various levels rather than let you jump higher by themselves) and super shoes (spring jump anywhere)
Decent art direction for the sprites, one transformation (mini form) via the potion and the gloves placed in some areas (temporary - go back to normal after exiting the current level/sub area), can replay beaten levels, temporary shield power up, upgradeable shot power and range (lvl 3 also keeps going after destroying something), some decent platforming puzzles, hover jump upgrade - not required for progression but still useful, fire protection vest (protects for a few seconds at a time),
GB ver.: cheaper items, new artwork stills for the ending

+/-
Partially non-linear structure (can choose between 2+ (4 on the second and 7 on the third floor) levels/sub areas at a time in the overworld/outside the castle)
The clues in shops tend to suck ("find a saw" - on the platform to the left of the first shop there's a hidden shop behind the wall apparently, use hammer on front wall=outside castle, sometimes you get a somewhat useful one after the fact)
Can't duck or crouch
Frequently respawning enemies (they tend to be easy though)
Start with less than full health
Password save (fairly short), temporary rate of fire upgrade (umbrella item), quick "exit sub area item" (balloon) - however you can't put it in your inventory for later use and you can only find one in the well, the canteen item just lets you damage two enemies that you couldn't before - could've been a sub weapon or changed the shot somehow, the feather (use the elevator platform) isn't needed, few exploration/movement oriented upgrades (the two pairs of shoes - only the first pair is really needed, the lamp to see in the well, the blimp - hover jump, paint - to see the invisible platforms in the shrines), minor backtracking (for the saw for example, can easily farm for health in the first level, get teleported back to the first floor from the NW door on floor 3 - this room in level 1 also lets you farm for money a few times)
GB ver.: smaller rooms, slightly fewer coins to collect (the cheaper items heavily balances this out in the player's favor)

-
Slowdown
Some control issues (floaty jumps indoors/in sub areas, loose scrolling, can't shoot straight ahead - only at ~30 degree angles up or down, you'll auto-enter exit doors in levels if you touch them, the game is a bit anal about positioning when entering small doors/windows in the outdoors/overworld)
Trial & error (fairly easy to miss the fake princesses in the shrine areas which you need to beat and get a couple of items from, finding the saw and one of the crystals with the hammer, no indication that you need to bump some blocks from below to make certain items appear nor that you can push certain blocks to make items or doors appear by pressing against them while shooting, finding various items - no visual or audio clues for the most part, unkillable enemy before the second boss, some hidden floor traps, some items aren't explained in-game - couldn't find the GB manual but the NES one also doesn't explain most of them, hidden springs, level doors aren't marked which can get confusing on floor 3)
Some tedious aspects (you can't tell interactive/destructible blocks apart from others, can't exit a level/sub area where you entered it - have to find the key and then the exit, one of the window doors on floor 3 just takes you back to floor 2 - one way path),
No area/level maps
Bosses are too similar and mostly easy in the GB ver., enemy drops can get stuck in walls or float upwards into walls, easy final boss and level, some grinding for money and health, a bit short