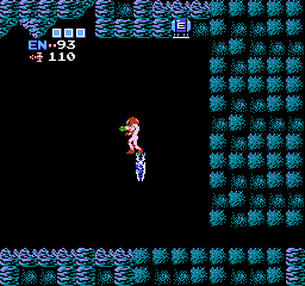 +
Some interesting mechanics (bomb jump, freeze enemies and use them as platforms, dkc-style jump, rolling ball, disappearing and reappearing blocks, etc.)
Good jump height- and mid-air control
Introduces the DKC-style double jump (clunkier and rarely useful here though)
Some memorable locations (mother brain base, norfair, elevator and item rooms)
Some sequence breaking is possible (can skip ridley and high jump boots)
Hack combines wave and ice beam+adds a basic map (should've shown more at once as well as item and red door locations - still want to use a guide map initially as a first time player), mostly good visual clues for hidden items and paths, some decent platforming puzzles, decent art direction (somewhat abstract and minimalistic) which fits well with most of the soundtrack, large world to explore for the time, adds a save feature (one slot per game, three slots that show progress through special items collected; need to reset to save?, can't pause and choose to reload - need to die), multiple endings depending on your time and completion percentage (minor differences though), upgradeable health (e-tanks) and ammo (missile tanks), good final boss and build-up before it, escape sequence afterwards (very easy though), enemy weaknesses and strengths to different weapons, some enemies feel like they're inhabitants of the game world rather than placed there to attack the player, reasonable knockback and invincibility time (the knockback suddenly gets longer during the final boss though), does an OK job at opening up piece by piece to the player and giving a natural sense of progression

+/-
Decent initial variation then gets repetitive overall
Two ice beams (maybe they thought people wouldn't find the first one)
Much harder to bomb jump than in SM (there's a code that makes it easy but then it's too easy)
Final boss is a lot tougher than the rest of the game
Hard to grind for HP/ammo in the final area
Some engrish, female protagonist, unlimited ammo on the main weapon, auto-fire (it's a bit slow though), no full health bonus like in Zelda, you can easily get past enemies in some areas (makes backtracking a bit less tedious), off screen enemy respawning, somewhat unforgiving hit detection when picking up missile tanks, no in-game explanations of mechanics or item uses, doesn't show boss HP, can't skip the "get item" theme, basic text intro, big focus on collecting (it doesn't become a goal in and of itself until the end game though)
​
-
Overly drawn out level design
Backtracking (no teleportation, very few shortcuts)
Can't duck and shoot or shoot downwards (there's a GG code for the former though)
Too easy to get lost due to the repetitive room designs
Trial & error (some hidden items and paths, boss patterns, dead ends and red herrings (room near the first ice beam, northeastern brinstar, fake kraid area)
Health and ammo grinding (no ammo/health stations, the intentional grinding spots are too inefficient without GG codes that make enemies drop more HP/ammo, enemies can drop ammo intead of health even though you have full ammo but low health), annoying beeping sfx when low on health, start out with only 50 HP even after reloading, hard to jump vertically upwards past a block above Samus without her hitting her head against it, some tedious near pixel perfect jumps out of lava, can't remove more than 10 or so disappearing blocks at a time, no weapon inventory (can only switch between beam or missiles), long beam is a lame upgrade, some unavoidable damage when entering rooms, annoying sine wave pattern flying enemies cheaply placed near lava pits early on (take too many hits to kill), some slowdown whenever there are 3+ enemies on screen (gets more severe in some segments), no new abilites in norfair/ridley's area, simple bosses (kraid and ridley) and they're too small to be intimidating, safe spot at the ridley boss fight, ridley's area theme, no difficulty or control options, no second quest, somewhat slow falling speed, no point in taking an alternate route early on since you'll want the bomb/missile/long beam/e-tank/ice beam as soon as possible, no neutral creatures, repeats enemy types a lot,


Notes:
-Need to turn off the lower shot code after getting the wave beam or the game will crash when shooting upwards