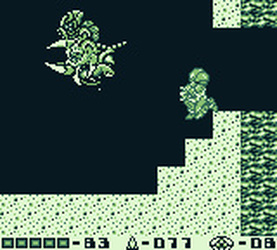 +
Some interesting mechanics (spider ball and spring ball, bomb jump, freeze enemies and use them as platforms, space jump, dkc-style jump, rolling ball, disappearing and reappearing blocks, etc.)
Good jump height and mid-air control
Keeps the DKC-style double jump (levels weren't exactly built around it though)
Much less health and ammo grinding (there are ammo and health stations here and there, most enemies still don't drop much HP/ammo though and often drop nothing at all)
Some memorable locations (the spring ball item room with the surprise boss in it, chozo areas, item rooms)
Some sequence breaking is possible (can change the order you do the bosses in at area 4/5 with enough e-tanks and space jump), mostly good visual clues for hidden items and paths, some decent platforming puzzles, decent art direction (somewhat abstract and minimalistic) which fits well with most of the soundtrack, larger world to explore, save feature and fairly frequent save points (one slot, can't choose between slots in the main menu and can't view your current progress (only indicator is the Metroid counter shown in-game (which spoils a bit of the mystery), saves your HP and ammo stats instead of setting the former to 50 when loading), multiple endings depending on your time and completion percentage (minor differences though), upgradeable health (e-tanks) and ammo (missile tanks), enemy weaknesses and strengths to different weapons, some enemies feel like they're inhabitants of the game world rather than placed there to attack the player (features some neutral creatures), reasonable knockback and invincibility time (the latter seems somewhat shorter than in the prequel though?), does a somewhat better job at opening up piece by piece to the player, environmental changes after beating all Metroids in an area (works like keys to new areas but it's a nice effect), can duck and shoot or shoot downwards in mid-air, better Samus sprite (and varia suit sprite) and you get to see her ship in game (can't fly it or interact with it though), somewhat more varied and less symmetrical/square level architecture, nice boss entrances, auto-fire (somewhat faster here), easier to bomb jump short distances and somewhat easier to jump long distances, develops some of the chozo areas a bit (area 1), introduces ambience instead of music for several areas (generally not great though), enemies with specific weak spots (the tall and thin plants, flyers with side shields, sadly nearly all of the metroid bosses lack this feature), adds large HP capsules (pretty rare), pretty good visual variation, pretty good use of the space jump in area 6, some large and detailed bosses, pretty cool final boss (same kind of build-up before it (metroids) but easier since there's only one at a time) - best tactic is to get eaten as a ball and bomb it from the inside (however it's hard to figure out since you get no clue and it becomes too easy once you use this tactic; not using it takes much longer and requires almost a full supply of missiles (200+)), escape sequence afterwards (no time limit here - instead the baby metroid helps you get out by eating crystals in your way (one of the first memorable storytelling through gameplay moments for the series)), no long beam item, shorter jingle when picking up missile tanks, varia/barrier suit now makes you move a bit faster besides cutting damage in half, fast health/ammo refills (can keep moving after simply touching one), decent enemy variation, little to no slowdown,

+/-
More linear than the prequel (especially in the beginning; might've been interesting to let the player move further without killing all metroids in an area somehow - maybe switches that lowered lava levels instead of it being triggered by killing metroids or less damaging lava?, while you can choose to do area 8 after area 9 it's kind of pointless since you then have to backtrack quite far)
You can easily get past enemies in some areas (makes backtracking a bit less tedious)
Unlimited ammo for the main weapon
Lots of smaller boss fights (the game is basically a search and destroy mission; 39 in total)
No full health bonus unlike in Zelda
​Female protagonist, Enemies respawn when leaving the room/sub area, might've been cool (and useful) to have a Metroid radar (similar to Cyborg Hunter for SMS or Alien 3 for MD etc.), no in-game explanations of mechanics or item uses, doesn't show boss HP, can't skip the "get item" theme, enemy spawning pipes eventually run out (pointless since you can just re-enter the room), spider ball movement takes some getting used to (gets weird if you stop in slopes), the space jump (the "jump over and over in mid-air" part of the screw attack in SM) also takes some getting used to (works sort of like in Revenge of Shinobi), most enemies now disappear after being frozen, high jump boots feel redundant when you have the spider ball + spring ball and can bomb jump fairly easily (even more so when you have the space jump), big focus on collecting, you get the space jump a bit too soon and it's easy to find (makes area 5 much easier), can't walk up/down slopes,
final boss is a lot tougher than the rest of the game, missiles now have acceleration to them (their speed starts out pretty slow - looks better but also makes it harder to time your shots right), metroid no. 5 (area 7) sometimes won't appear until you've circled the area, you can be pushed out of the room during boss fights (also means you have a chance to escape though - even at the final boss),

-
No in-game map
More dead space (almost no regular enemies in area 9, empty first half of area 10) and more trial & error in finding hidden paths
Slower jump and fall speeds (not sure if the varia/barrier suit (area 2) has an effect on jumps?)
Slow spider ball movement
Bombs take somewhat longer to explode
Still kind of drawn out level design, backtracking (no teleportation, very few shortcuts, areas 4 and 5 are pretty bad in this regard; at least it's generally limited to the current area) - could've used the save points as teleporters, too easy to get lost later on due to the repetitive room designs and now also the lack of color (the latter can be fixed with a romhack), more annoying beeping sfx when low on health (it now starts sooner and gets more intense as you get closer to dying), overly large sprites/zoomed in view - makes exploration slower and makes it harder to get a good overview of a room, repeats some enemy types a lot (several enemies are just sprite swaps of earlier ones) while others are only used once or twice, still no weapon inventory (can only switch between beam or missiles, can switch back and forth between weapons but you have to go to where you found them to do it (until area 6 which has sort of a hub with all four weapon rooms stacked on top of each other)), some annoying music/ambience (the track for the areas before an item room, the bee/fly noise track), trial & error (invisible floor traps in area 10, final boss bomb tactic - if you don't figure it out you need to go back and get a supply of at least 150+ missiles, the unlit room (need to jump to see the exits), finding the ammo station in area 3 before dropping down to the area with 6 metroids in it, finding some hidden items and paths, boss patterns, dead ends and red herrings (several "destructible sand block" rooms, some item rooms, bottom of area 2), some enemies can still drop ammo instead of health (or vice versa) even though you have full ammo but low health and some enemies won't drop one or the other at all (wtf?), no difficulty or control options, no second quest, most early metroids don't attack and can't be attacked until you move close (they just sort of hang in the air which looks bad - they could've been laying eggs/infesting the area/feeding on something) and it's fairly easy to trap some of them (eastern area 1 for example) behind corners, no intro, somewhat uneven sprite work quality at times (some smaller enemies, no death animation/explosions from the chozo turrets), some tedious ceiling climbing parts (many parts where there are flying enemies around and some where you need to bomb several times in a row without falling down), mostly simple and small bosses (most of them seem unable to move when off screen, no need to figure out weapon combos or weak spots, the sound design helps make them scarier though), the ice beam gets replaced by the wave beam (wasn't that useful anyway?), no ammo or health stations in areas 7-9, no new abilites in areas 4-5 and 7-10 and no new items in areas 7-10, some unavoidable (omega metroids - these move too fast and always stay really close),