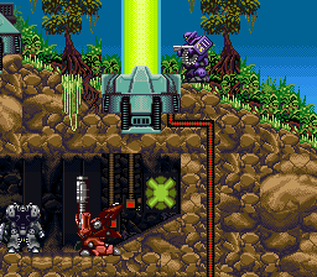 +/- Can't move while using the regular shield (only turn around), can't duck, can't stomp on foot enemies to death, temporary main weapon upgrades, no weapon/power up inventory, one of your mechs gets stolen during mission 3, pretty good but few bosses, unlimited flight when using the default mech and the on foot pilot (thrust-based), fairly easy final boss fight (the race afterwards might catch you off guard though) - apparently you can kill the pilot with the heavy cannon mech's flamer if you stand in exactly the right spot and kill the mech in the right spot, no alternate paths and no equipment screen inbetween missions

​- No checkpoints (missions are generally divided into a couple of sub areas but still), no health meter (your mech changes color to indicate damage but it's a bit vague and hard to get used to), you can’t review an objective given during a mission, you can mount several different mechs but most of them worse than the main one because of their limited maneuverability, somewhat uneven difficulty curve, no difficulty options, lacks some explosion sounds, trial & error (power ups from opened containers disappear pretty quickly, mechs die a lot faster when not piloting them, alternate weapons are timed (only 10-15 sec) instead of ammo-based and you sometimes need to know beforehand when and where to use them (some walls can only be destroyed by these weapons - not required but you'll miss some power ups and mechs), shots from off screen), many attacks can't be dodged, seeker weapon (bubbles) is pretty weak, some control issues (can't use the sword or pull out the regular shield in mid-air, can't cancel a sword swing, knockback when using the sword on destructible tiles, can't jump down through elevators, no aim lock/strafe, awkward climbing controls for the spider mech), no save feature, some tedious parts (most of mission 6), no sense of escalation in mission 7 (defend base against three giant robot worms), you don't get to see much of what happened after you beat the final boss (a short cutscene shows your mech crashing and the main ship coming to pick you up but then the game goes to the staff roll),