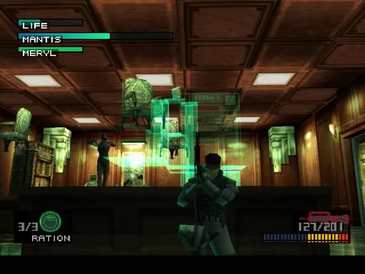 ​
+
Can now see enemies' field of vision
Re-uses a lot of the good ideas from MG2 (wall knocking to lure enemies, crawling, beginning area setting, waiting for meryl to go into the women's bathroom when she's disguised as a soldier, bosses requiring some specific tactic rather than just shooting and dodging, the elevator assassination attempt, etc.)
More advanced binocular use (game switches to first person view and you can zoom in and out)
Good voice acting overall
Throw and strangle moves (you can also use an enemy as a human shield by using the latter move)
Some memorable characters (snake, most of the bosses, naomi hunter and campbell, nastasha, )
Nice boss intros
Keycards/ID cards now stack
Difficulty options (very easy, easy, normal, extreme; hard and above removes the radar so it's a huge leap from normal, very easy is new to this version and lets you start with a rifle that has a silencer and unlimited ammo)
360 degree movement and attacks
Ranking system (your rank is only shown after beating the whole game though so you can't see how you're doing over the course of the game), alternate round unlockable (new enemy placements and patrol patterns, new camera angles in some cutscenes), new outfits for snake and meryl on your third playthrough (tuxedo/sneaking suit), unlockable "1P View Mode" (have to beat the game; this lets you move and shoot in FP mode - a few parts are still limited to top down though), pretty good art direction and overall animation, can speed up dialogue on a per sentence/paragraph basis (but not without silencing the rest of the dialogue for that scene), includes the VR missions (there's 300 of them though they're very short) on a separate disc, better textures than on PS1, guards can now react to footsteps in the snow, new tricks to make you feel more vulnerable (can't use your weapons in one area (near the warheads), the radar jams when getting close to Cyber Ninja), one gameplay choice that affects the story (a side character's survival, affects the ending), some funny moments (the game over voices, make dogs non-hostile by letting them pee on the cardboard box), can wall hug move under cameras (like in MG1 NES) as well as jam them with a special grenade - makes these parts a bit faster, some interesting gameplay (fight alongside meryl in the cell escape segment, some fourth wall breaking stuff (psycho mantis's comments - not in this version though?, back of the cd case=back of the physical game's cd case), torture/cell escape segment (alternate solutions?), the hind chopper fight, the fist fight with liquid), some new gear (camera, sniper rifle, night vision goggles), some unexpected plot twists (finale and ending), can shoot while moving by pressing the crawl button while shooting,

+/-
Auto-use of rations when you're about to die (need to have them equipped though)
While you can save at any time the game really only saves at the beginning of the current area (and collected items are lost)
Saving both via the pause menu and via the radio/codec (redundant)
Can't attack while in first person mode
It's much harder to survive after detection than in MG2 (mainly due to shots being faster and landing your shots being a bit trickier)
The black guy is the first story NPC to die
Ammo and health items replenish after leaving the area (leads to some backtracking before bosses since you can't hold nearly as many food rations/hp refills this time and you'll need them for the bosses until you know exactly how to deal with them - first 2 then one more every other boss fight?)
The psycho mantis puzzle (have to use the keyboard for him to not be able to read your mind) would've been better if you just got some clues instead of the game outright telling you about it
Snake is a thirsty dog (a lot more sexual dialogue between him and his several female partners compared to the prequels)
Mostly cheesy and over the top story
No longer need to punch the enemies to death to get loot from them, easier Ocelot torture segment (haven't played the original), radar is jammed while being chased, much more wordy story with plenty of lengthy cutscenes used throughout, the spotlights are a good idea but only used once in the game (near the beginning), the game pauses while browsing the item and weapon inventories, can only reload your gun or use rations (HP) in their respective menus, can't cancel a punch by moving or punch while moving, you'll start crawling if you use that button to skip a cutscene

-
Camera issues (the game is inconsequential about the behind the shoulder view camera activating when hugging a wall and sometimes you don't want it to trigger, loose scrolling, zoomed in view, twitchy angle changes when moving around an area)
The radar is more zoomed in than in MG2 and there's still no map feature
Slow crawling through air ducts
Can't skip single sentences during non-radio cutscenes (cutscenes tend to be split into a few scenes at least)
No log/journal feature and NPCs tend not to repeat messages that could be important
Some inconsistencies (targeting movement speed when using the sniper rifle, some rather loud noises won't lure the enemy soldiers while some fairly quiet ones will (like walking on certain terrain), enemies don't have invincibility time while bosses like Ocelot do (and Cyborg Ninja can't be hit more than once while stunned, the Hind can't be hit right before it shoots its missiles) - some boss fights are too long because of this, other weapons do as much damage as punches to Cyborg Ninja, )
Plenty of shorter cutscenes are unskippable (tends to be the ones before and during boss fights unfortunately)
Some unnecessary tutorial-style messages from NPCs
​Trial & error (the game doesn't tell you about riding trucks between the buildings? (it was a bit more intuitive in MG2) nor that you can use FP mode during the turret segment near the end, mines in one of the radar jammed areas, some frequencies aren't saved by the game (memory sub menu) right away, fast attacks from off screen by psycho mantis, game doesn't explain how strangling works (possible to strangle meryl during the psycho mantis fight), chaff grenade area of effect, loose scrolling and odd movement speeds when using the guided missiles, learning to pick up mines for later use (need to have played MG2 to know), first infrared laser encounter (the warning and clue come after you get detected though the trap is visible before that), floor traps - easier to avoid than in MG2 though, avoiding detection in radar jammed areas, C4 explosions reach longer than it looks like (and you now get knocked out for a few seconds when you get hit) - at least the explosion is more satisfying than in the previous games)
Still have to equip cards to use them (and you can't for example have a gas mask on while using a card, doors still become relocked right after passing through too)
Unresponsive pause menu/main menu, can't control how far to throw a grenade, some difficulty spikes (the game is harder before you have a gun with a silencer on it (and because of the small amount of damage Snake can take before dying), cyborg ninja, ), can't jump or hop over smaller obstacles (Snake can clearly jump in cutscenes (even dodge the turret shots from the tank boss) and some bosses like Cyborg Ninja can jump too), sometimes sloppy (unforgiving) hit detection (fist fight with Liquid, on Cyborg Ninja's punches during the last phase of the first encounter with him, when standing too close to an enemy you're trying to punch, when trying to hit niper wolf while she's standing behind a tree - her hit box is quite big when she's not hiding though), can't avoid damage during some segments, sometimes polygons break up or into each other in weird ways and the characters have no eyes in-game, some translation issues? (parts of the script seem kind of non-sequitur), still no strafe or dodge moves, still can't use enemy soldiers' weapons, minor framedrops at times, plot oddities (Baker not dying from the explosion when Cyber Ninja triggers it when he does if the player triggers it, snake getting easily detected in cutscenes), can't pause during cutscenes, more gimmicky gameplay in the second half of the game (and less regular stealth parts), plenty of backtracking towards the end of the game (for the sniper rifle, yellow key card, reshapable key (re-used puzzle from MG2), etc.) - incorporated VR mission areas or new enemies/hazards could've been used to vary things up here, no way to knock out/sedate soldiers for a longer period of time, can't stand up or crouch while using the sniper rifle (you automatically start crawling), drawn out staircase segment (can't fight the chopper from tower A and no one tells you when the path to the top of tower B opens up - it's closed off the first time you get to the elevator) and metal gear base elevator segment (should've been skippable after the first time through showing just the radio conversations instead), pretty rigid and repetitive fight with metal gear (also can't skip some of the cutscenes if you die here, too easy if you use chaff grenades to slow it down, annoying semi-interactive death scene with gray fox/cyber ninja, inconsistent lock-on mechanic for the stinger missile launcher), drawn out and clunky escape sequence at the end (turret shooter segment with slow turning controls, you also have to do it on just two rations and having lost all other gear), some sound issues (some sfx are wrong compared to the original and the main boss track only plays once, some music doesn't loop properly, some music tracks sound worse?)


Notes:
-New to Integral: Calling frequency number 140.66 in certain locations (namely the canyon, the entrance of the Comms Tower, and the snow field) will allow the player to listen to hidden music tracks. Calling 140.07 will display messages from various members of the game's development team. These staff commentaries are unvoiced and displayed in Japanese only.
-Parts of some cutscenes were sound only on my PC
-Original game (PS1) was released in 1998
​