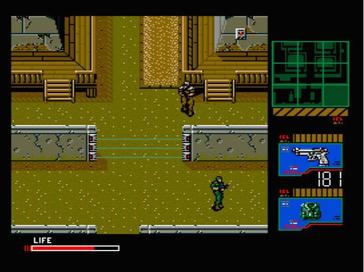 + Radar feature (turns off temporarily when detected or while in air ducts, shows enemies and some important NPCs), enemy soldiers now move between screens, somewhat improved stealth mechanics (you can now lure enemies towards a spot by punching the wall - doesn't always work as expected though, certain terrain makes noise that will get the enemies' attention, you can crawl under tables and some vehicles (also helps to avoid the aforementioned noises)), can now speed up text on a per paragraph/text box basis, more fleshed out characters and gear descriptions, binoculars are a bit faster to use, better bosses overall (the first one is quite hard though and causes some slowdown making the controls less responsive), more varied environments, checkpoints at the beginning of each area/when exiting or entering a building, good length (about twice as long as the prequel), get tips from NPCs via the transciever (they won't always reply though - a bit jarring in the beginning when you're told to call people and they don't reply), placed items like ammo no longer replenishes when you exit the room/screen (instead it replenishes when you leave the area), some comical parts (mainly the bosses, the sauna soldier, lockers big enough to fit several people into), some interesting level design (final bosses, more complex level architecture overall, getting transported to places by using the box disguise, escort segment, the rooms with soldiers hiding among soldier mannequins, moving infrared laser rooms (new variations on them, garbage room in the first building, enemies turning off the lights), changed level up/rank system (increases inventory sizes and ammo supply) - now it's increased after each boss fight, boss introductions, pretty good at creating a sense of vulnerability at times (beginning, ), nice intro and ending, you still get better rewards from enemies by punching them to death (odd but works from a gameplay standpoint), save feature (loading puts you at the previous checkpoint though), some decent puzzles (pigeon message, Natasha's key), other interesting gear (use the cigarettes to detect infrared lasers, mortar missile (chopper boss), mouse robots to distract enemies with, the enemy can place a tracker in your inventory if you get captured (can be thrown away), robot mouse, night vision goggles, national anthem casette tape (freezes soldiers for ~10 seconds), etc.), two escape sequences,

+/- Harder to shake the enemy after detection early on (sometimes moving into a different room works), no scrolling, can't be seen through fences, loading times between areas (~5-8 seconds), still no diagonal movement or attacks (enemies can shoot diagonally), start out without a weapon, can't cling to walls (see Crack Down), limited ammo, touching enemies hurts Snake, the enemies are pretty bad shots, can't simply knock out enemy soldiers, enemies tend to respawn as soon as you're two screens away from the screen they spawned on, rations can be used in the inventory menu (while the game is paused), can only call certain NPCs from certain screens, still can't grab weapons from enemies, the "trail the green beret" mission is interesting but too slow paced (the swamp path is kind of tedious to decipher as well, the stairs part is also pretty drawn out), you can kill children (though you're penalized for doing so it's only a slight HP loss), can't move and shoot/attack at the same time, grenade launcher was replaced by thrown grenades (which is how they worked before anyway), no dogs, some weapons are very situational (would've been cool if the metal gear fight made you use a variety of weapons), some of the character portraits are based on western actors, no difficulty options? (they're there in the later release included with MGS3),

- Slower turning and crawling is a tad clunky (need to press both fire and punch and then let go, some delay between actions), minor delay between screen transitions, detection inconsistencies (after triggering the alarm - in screens with a higher platform the enemies can suddenly see you though their shots won't hit you, can't generally be seen when being on the same height but different platforms from an enemy - yet sometimes you can which is frustrating), no button config, more dead space (air duct crawling, spiral corridor and elevators in building 2), can't see found doors on the map, waiting for elevators (actually using them seems a bit faster though), having to switch keycards quickly gets old (you'll eventually get a card that combines cards 1-3 but it takes a couple of hours and should've been a default feature), still need to re-open unlocked doors (going into the menu and picking the right card) right after unlocking them and moving to the next screen, slowdown (first boss, first floor of building 1, ), bomb explosions are smaller, pretty ovious that Petrovich would betray you, sloppy hit detection on mine and grenade blasts (they reach much further than it looks like) and when your sprite overlaps with enemy sprites, no dodge or strafe moves, somewhat slow movement and you can't run, backtracking for weapons (bosses 2, 3 and 4 all require a specific weapon to beat, boss 7/petrovich is much easier with guided missiles) and keys (and for Natasha after the fourth boss, and then the hangglider..., need to resupply on B1 rations after the snake eats all your rations (can't be avoided?) to get past three acid pools, backtracking to change the shape of Natasha's key/brooch _again_ after the petrovich fight) - the sewer stream path could've been usable throughout the game or there could've been a two way truck transport between the first two buildings (there is one going north that's placed south of the swamp but it takes too long to cross the swamp), can't crawl while escorting someone, can't use the cigarettes to tell which way the wind is blowing, trial & error (keycard 9? - no clues from what I can tell (it's in the northeast of the boss 6 area but you can't get it until reaching the door past the acid), no warning about the truck that moves back south when you get on it in a box, it's never explained in-game that you can pick up mines by crawling into them (a must to defeat the second boss - running man), radar stops working in small rooms leading to cheap detections, the pitfall traps, can't distinguish between a locked and unlocked door at times and the game doesn't tell you which keycard you'll need for a locked door when movign up to it, ), some plot conveniences (sudden oil drought/depletion worldwide, ), soldiers still have a minor case of tunnel vision, it's too easy to get predator (boss 6) stuck in one pattern, dialogue is sometimes shared between different NPCs (the kids),

Bugs?:
-Can't communicate with Kessler until the final boss where he calls you and gives a bunch of exposition about Grey Fox
-Not all of your items are burning before the grey fox fight but you still need to use all of them up/throw them away (have to use up each mouse robot individually for some reason)