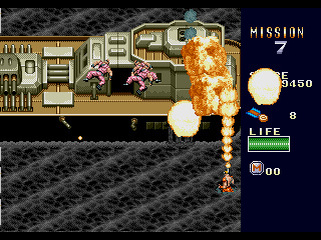 Original mode: Adds 4 new characters and upgrades (health bar length, attack power, speed) which can be found or bought in shops, you can switch between characters on the fly using the pause menu, hidden items and shops, you can ride vehicles (jeeps, boats), alternate paths, no time limit on items, some cool weapons (homing missiles, flame thrower, laser),

+/- No continues in original mode, quickly respawning enemies, the game expects you to take some hits and switch between characters much like TMNT for NES (unless you memorize everything and use bombs at the right time,

- No dodge move, loose horizontal scrolling, no 2-player co-op, trial & error (the prices and stock in shops vary a lot but are the same in every game, need to save bombs for bosses later on, very fast attacks from some enemies and the screen quickly gets filled with soldiers if you stop moving), impossible to dodge some attacks unless you have the right character/equipment, the secondary characters are all worse overall than the original because of their lack of speed and/or slow fire rates (the others have their uses though such as against obstacles or vehicles and the flame thrower is usually very good against soldiers, but the Launcher and Homing characters are underpowered overall), poor final boss and ending (level 7 boss is much harder, almost no difference in hard mode and the ending is the same), some slowdown (more in hard mode), can’t pause while a boss is appearing or while riding a vehicle, invisible walls here and there, some bland backgrounds (they lack some details from the arcade version)