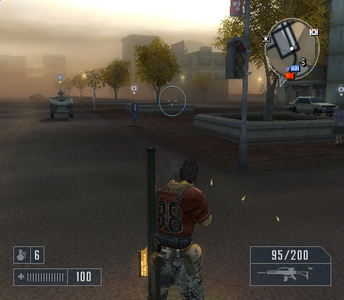 ​
+
Highly destructible environment and you start off with C4 (can blow up entire buildings with certain turrets and air strikes, some skyscrapers can be demolished)
Three different playable characters (Chris Jacobs (black american) - resilient but slow+speaks korean, Jennifer Mui (Asian Brit) - better sneaking (she doesn't get detected at all if on foot outside of an enemy's cone of vision)+speaks chinese, Mattias Nilsson ("Swede") - fast and tough+speaks russian)
Various vehicles and you can steal enemy vehicles (jeeps, tanks, APCs, rocket truck, helicopters - these also have a winch for carrying and dropping objects; enemies can also steal yours if you leave them behind). Can run over enemies. Can also hijack a helicopter as it's taking off or jump out of a jeep while it's moving - cool!
Good weapon variety (stun and frag grenades, explosives with remote triggers, rocket launcher, shotgun, anti-air and anti-tank missile launchers, rifles and machine guns, sniper rifle, scopes for some other weapons (?), air (and other) support - for picking up captives and taking out artillery, homing rocket launcher on two of the choppers - first one only gets two shots though)
Fairly unusual setting (North Korea)
Fight alongside a bunch of CPU allies (you'll also come across NPCs or different factions fighting against each other and can choose to join in or not)
Can change allegiances (the game shows a faction's gauge going up or down depending on your actions; Pirates!). Can also bribe a hostile faction at their HQ. Some gates only open for vehicles of a certain faction
Satisfying explosions and they send enemies flying
Pretty good map system (marks the next objective+your location+side mission locations, mini-map which also shows side missions (dollar signs)+wanted enemy leaders/cards+faction areas in blue+enemy and ally aerial vehicles+restricted areas in red where you'll be killed if you enter)
Rescue/Medivac feature (costs some money but it's cheap at 1k, also restocks you+repairs your vehicle if you drove/flied to the MASH - see notes below, you also end up getting medivaced automatically if you get KO'd as long as you have $1k)
Basic stealth (stay disguised as long as no one saw you get into a vehicle belonging to their faction (can also move far enough away from where you were seen to re-disguise), lose the disguise if a faction's officer spots you; sniping, alarm towers - can also trigger them in an allied base, sneaking on foot doesn't really work - see below). Can also sneak better as Jennifer though it's not that useful?
Shop from anywhere outside (vehicles, weapons and ammo, explosives, air strikes; wares are delivered to you via helicopter drops - similar to JP: Lost World (MD) and later used in Just Cause)
Decent variety (defense/holdout missions, can choose to capture and extract or kill wanted enemy leaders/cards (capturing yields more money), air strike and satellite guiding with a laser, retrieval/collection, steal vehicles to sell to the russian chopshop, escort and rescue missions, some side missions (racing against the clock, maintaining minimum speed for x meters, destroy NK jeeps under a time limit, taxi rides, etc) - mostly decent, ). Decent freedom in how you use your weapons and vehicles to tackle a mission
Some voiced assistance and commentary (occasionally the instructions and comments are too obvious)
Can investigate units and objectives for more info with the binoculars
Crouching stance (weapon effectiveness is increased during it, can move but the stance is automatically left if you start running; L3)
Less blurry and bloomy than on XB
Some funny dialogue (pretty cheesy overall)
Most main missions take place in the same instance of the game world (unlike in Spider-Man 2 or Incredible Hulk: UD). Ace contracts are an exception
Can abandon or retry a mission via the pause menu - keep playing where you left the mission with minimal interruption
Can listen in on some radio transmissions talking about how things are progressing
Optional side objectives/bonus conditions during most of the main missions
Different ending depending on which faction you help the most and if you stopped the nuclear missiles or not

+/-
Mostly non-linear structure with two large hub areas (gain access to 15 minor side missions after the first main one, linear main story structure until after you've done one mission for each faction - after that you can choose who to work for and when for the most part (for ace leader missions you can't choose), can also capture some clubs/leaders outside of the main missions by following clues picked up during missions, optional side objectives/bonus conditions during most of the main missions, gain access to the second hub area after finishing enough missions - ?, work for the south koreans becomes unavailable at one point (after the timed artillery mission at the NE gate even if you beat it in time), not much point in going back to the first hub after getting to the second - can only do the leftover side missions at that point)
No hard ability gating besides using a chopper, fast ground vehicle or an air strike for certain missions
Save anywhere outside of contracts/missions (multiple slots, character and time taken only)
Can only carry two different guns at a time - not flexible enough at times and you can't mark where a weapon you didn't pick up was (later on you can bring supplies in though)
No lock-on but some aim assist when on foot - not very reliable as it moves kinda slow and sometimes just drops the aim (a bit worse with Nilsson maybe? - nothing about this in the guides)
No dodge or block moves - would've been useful vs rockets (you're expected to take damage here and there in the game). Dodging anti-air in a chopper is also near impossible though if you know where they are you can sometimes sneak up on them
Partial HP regen (up to 20 HP only)
The mini-map rotates with you as you turn (can't turn this off but it does always mark where North is)
Can't pick up items while in a vehicle besides the helicopters
Limited ammo for all non-melee weapons
Can't identify people and vehicles with a weapon's scope - have to use the binoculars (R3)
Can move ammo/armor/cargo crates around with the melee attack/bash
Can shoot a supply crate's chopper pilot to get the chopper (non-allied supplies only)
Can run into soldier NPCs outside of HQs but nothing happens (they just get displaced). Civilians on the other hand get killed and you lose money for it
Keeps track of various stats like amount of saves and shots fired but doesn't rank you on them
Non-interactive dialogue
Racing challenges progressively get harder in terms of the time limit depending on how many you've beaten rather than certain ones being harder than others (some routes are also simply harder to get through) - eventually they become impossible!
Game goes into slow motion/survival mode when near death (can help but the screen also gets a strong red tint and you can hear your heartbeat which can be stressful)
Exaggerated physics (sometimes good such as when running into other vehicles or jumping via ramps, sometimes bad - see below, oddly low weight to cargo boxes - can bash these and have them move quite a bit)
Can't switch character during the game
The map doesn't show railroads - these can be used to get past roadblocks when escaping bases
Can't carry health packs with you for later use
Can't grab ledges while jumping
Some missions are very short (first helicopter mission for the russians, )
Allied soldiers forget about you being in a vehicle a bit too quickly (and then think you're the enemy if you honk at them) - can just honk but you lose the disguise which sometimes feels clunky such as when a certain faction should know that you're on a mission be expecting certain vehicles
Grenades are a bit weak for how few you can carry - sometimes need 2-3 to take out a fuel tank or fuel truck
Respawning enemies at certain enemy structures (can be destroyed)
Only certain turrets can be fully rotated (the others are often useless because of this)
Sometimes have to work for a different faction than the one you want
Very little platforming and seemingly no ladders (would've helped with sniping at times)
No difficulty options
No armor or health bar upgrades
Generally can't choose which vehicle to use for Ace missions
Some enemies are really good at dodging rockets

​
Notes:
-The intro's dialogue is glitched out in PCSX2
-Cheap HP/Weapon/Vehicle Loadup (this also happens if you park outside of a HQ and go inside to take on a mission) - To get a very cheap loadup on a vehicle, fly/drive to the MASH. I usually park on the helipad, and then medivac. You will respawn with full health and ammo. The vehicle is fully tanked up as well, for the cost of a detour and $1,000.
-Beat it as Mattias with the SK ending, got most but not all items

Bugs:
-Due to an oversight, Jennifer has both Mattias's speed bonus and a stealth bonus on XB (check PS2). https://www.youtube.com/watch?v=suuOa90WESE
-The physics can glitch out when running over fencing - can make a rocket truck blow up if an enemy vehicle is next to it
-The first ace's AI can glitch out and have him not run away after destroying the tower