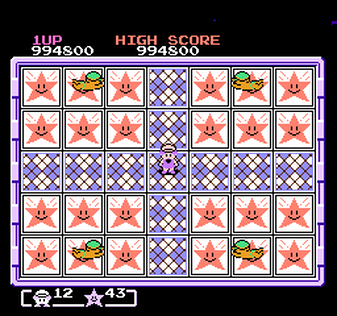 
+
Choose your own path (hub map with 8 worlds)
very long (80+ levels)
floor tile flip mechanic (most tiles can be flipped to show either a power up or a block or a new enemy spawning point - some have more than one tile in their "stack", allows domino/row flip attack and launch pad/spring attack, flip all attack (a smart bomb of sorts))
bonus levels (not that interesting but entering one also lets you skip the current level)
2-player
​unlimited continues (restart on the same level), randomized levels, some interesting enemies (some can flip a row of tiles by stomping the ground, some can crack wall tiles, three of the bosses transform you into an enemy, enemies that turn tiles unflippable by drawing on them - these can also draw enemies that come alive in later levels of that world), good art direction and animation, enemy flip attacks also affect other enemies, respawn with your current progress on a level saved (not the case for boss levels though), pretty good bosses overall (a couple of them just spawn six regular enemies),

+/-
Hidden level timer (enemies become faster and home in on you after a certain point, can be increased a little via power ups before that)
collectathon/killathon (kill all enemies to beat a level, collect all stars to beat a bonus level)
can't jump while your enemies can
have to touch the middle of a tile to get the power up
can't pick up for example a "domino" power up to use when you need it
​single screen levels, can't flip a tile while standing in the middle of it, world 8 just cycles through the previous worlds' enemies,

-
Slow turning and if you press attack/flip while doing it it won't register
no diagonal movement (instead your avatar zig-zags if you press the d-pad diagonally)
repetitive
some trial & error
can't gain any new moves?
​gets very hard to crowd control enemies after they speed up, sometimes uneven difficulty (tough level 9 in clown world and boss, easy ballerina world, easy level 9 in the brown jumper enemy world, mostly easy "flipper girl" world and its boss, easy levels 6 and 7 in world 8, second to final boss),