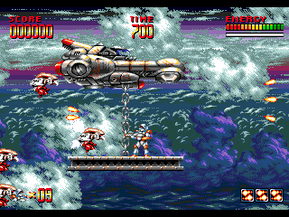 
​
+
Pretty intense action
Some good boss fights
Secret levels and items
The grappling hook (used to reach power ups mostly, helps with some vertical platforming segments)
Smart bombs (three per life, more reliable than the wall blast in other games), very frequent checkpoints (restart the level only after losing a continue, respawn on the spot at bosses)
Difficulty options, great use of colour (pushes the palette to the limit) and some neat effects (rotation, shadow/highlight for simulated transparency), the game keeps track of how many 1-ups and diamonds you've found or missed after each beaten level, small knockback when hit, shield power up (lasts ~8 seconds), move while firing, mini-bosses, use roll move to jump further (Diddy Kong style)

+/-
Vertical-based jumps without momentum (similar to Contra)
Easy to rack up extra lives
Very short invincibility time when hit
More linear than the Amiga games (still has lots of sidetracking for power ups/extra lives though)
No 360 degrees laser
Limited no. of continues, the 360 degree laser is replaced by a homing missile sub weapon and a different rebound weapon, the rolling ball move is a bit overpowered but has limited duration this time and you can't control it as well as in Metroid (invincibility time while using it), time limit (usually pretty long at 400+ seconds though it goes against the exploration aspect of the levels, less of a problem here than in Super Turrican), can’t move while crouching, no hidden item containers to use as platforms

-
A bit short
Somewhat basic power up system (only one level of upgrades per weapon type, no weapon inventory or ability to drop an unwanted weapon – rarely matters though)
Cutscenes look pretty awful (wannabe anime/transformers style)
The final boss is pretty easy
Some tedious parts (alien nest -vertical platforming and maze structure)
Some trial & error (worm enemy in stage 2, some traps, some bosses), somewhat loose scrolling (the camera doesn’t quite center on your avatar when moving left/right but adjusts itself if you release the d-pad), one or two leaps of faith (can’t look up/down), easy bosses overall, one or two cluttered backgrounds, so-so smart bomb/lightning sfx,


Comment:
I was never a big Turrican 1/2 fan. The loose scrolling ruined the flow, and the exploration wasn't as satisfying as in Metroid when what you found didn't have as interesting a use in the game world. Mega Turrican fixes these issues with a more direct approach, and manages to be one of the best 16-bit action platformers in the process. What it lacks in originality it makes up for in playability and overall polish.