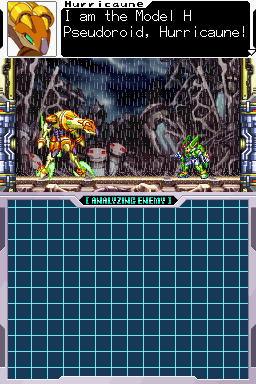 
​
​
+
Very good bosses overall (varied patterns, two phases to the final boss), Mini-bosses
More PA/MV elements (ability gated parts of areas unlocked by alternate suits with new movement abilities: wind/harpuia/model hx - air dash (sideways and upwards, MMX2?)+hover jump+the thunder element to the sabers lets you move some trucks in the town area and activate some moving platforms in area I, ice/leviathan/model lx - underwater swimming and water dash (8 directions)+create ice platforms which rise to the surface if underwater, flame/fefnir/model fx - megaton crash charge shot for destroying certain objects and knocking back enemies+buster edit which lets you draw a trajectory for the shot, shadow/phantom/model px - hang from ceilings and below platforms+see further in dark areas; some backtracking to previously visited areas to progress or get to items, lifebar upgrades via found items return but not via cyber elves, some breakable and false walls)
Some other interesting abilities (enemy analysis (wind/harpuia) - name+hp+if it carries a biometal fragment, ice/leviathan) - search (light which homes in on nearby items)+doesn't slide on ice+item scan feature (mini-map on the second screen), shadow/phantom - night scope (shoot through obstacles and see the whereabouts of nearby threats)+radar scope (more zoomed in mini-map on the second screen which marks enemies and secret paths)+barrier projectile (charge move)+dash through enemies and projectiles in overdrive mode, copy/model a suit - transform into any defeated enemy and use its attacks (similar to zero knuckle an classic MM)+homing shot that can target up to 8 enemies, remove optional flame barriers in one area with thunder charge shots (a bit odd that ice doesn't work))
Various teleporters/transervers that let you move between visited teleporter rooms in other areas (these tend to be placed after bosses at the end of mission areas making them work like shortcuts out of them)
Two somewhat different playable chars (vent (boy) and aile (girl), aile crawls a bit faster while vent has less knockback (?) when shot), somewhat different story)
Some decent puzzles (getting to the life upgrade in area I w/ tornado, using ice platforms underwater and electricity on some platforms to get to some other items, using buster edit for an optional database item in area M)
Skippable cutscenes and the FMV parts of them are now animated and look pretty nice (unskippable staff roll though)
OIS/Overdrive Invoke System - temporary boost to attack power (energy gauge-based and it drains pretty quickly but can be turned off at will, overdrive and some charge attacks activate a suit's element)
Full control config
Some environmental changes (can shut down the lab area machinery and certain traps by taking an optional path there - similar to the side objectives in MMZ4, attack on the HQ, shut down the fountain to reach below it, slow down the lava in area k using a hidden computer)
Database feature (enemy & NPC encyclopedia; sadly these don't have any gameplay use)
Double slot feature - start the game with MMZ3 or MMZ4 inserted into the DS and you can face bosses from those games in a certain area of this game
Difficulty options (easy and normal by default, unlock hard mode by beating normal - faster bosses+enemies and bosses do more damage+no HP upgrades and only one sub tank (which is also the hardest one to get - nurse side mission)+much more expensive biometal repairs)
Some interesting level gimmicks (lava wall/floor chase - Contra HC/Shadow of the Ninja, changing water level - Sonic?, hover near spikes - Lost Vikings/Earthworm Jim, machine that can grab you in the amusement park area - Sonic 2?, partially burning area w/ some surprise attacks in the background, minor wind effect in one area - Ninja Gaiden 2?, satellite discs that reverse your movement if within their range in area l (can be deactivated), etc.)
One hidden boss which unlocks an overpowered model ox/omega suit
Quick charge upgrade (talk to fleuve multiple times after beating all main bosses; required for getting one of the sub tanks)
Can hit a larger consumable (placed or dropped) to make it split into three smaller and different kinds if you need something other than what it is

+/-
Partially non-linear mission-based structure (2-4 to choose from at a time and then you can move on to the next set - actually ends up a bit more linear than the regular MM games only with more backtracking and searching for mission areas, optional backtracking and sidetracking for items with new abilities, the town and mountain pass areas (C and B) are hubs of sorts as they connect to four other areas - 8 areas only connect to one other area besides via teleporters, some mission areas are very straightforward (amusement park, area L), some optional side missions can be taken on via the HQ)
Pretty frequent save points which also heal you (3 slots, shows current area+time taken+money, take on missions and report back on finished ones at these) - they don't refill energy/ammo however. Some additional quick save points were added to the legacy collection version
Lives system (carry up to 9, rare drop but some are placed here and there and can be farmed) - can't choose to restart at the last teleporter or save room after dying
Collectathon element to some missions (second mission - hide and seek with 4 guards, ) and optionally for the database (bestiary/NPC encyclopedia)
Play as a human in an AI robot suit (biometal) here rather than as a robot
Off screen enemy and destructible object respawning - good if grinding for health or crystals but sometimes annoying when backtracking or sidetracking (placed consumables respawn after moving to a different sub area which means they can be farmed). A few mini-bosses also respawn which is a bit tedious since they don't drop anything
Ammo/energy-based elemental attacks here
Radio transmissions and tutorial messages during missions pause gameplay
Model X has a second charge shot which stays charged after releasing the button to shoot the first one (tap again to fire; MMX2-3) - however after gaining the zero suit you have to press two different buttons as these charge attacks are mapped to the blade and gun separately and you can't charge both while moving. Model X is also replaced by ZX after a couple of missions unless you've beaten the game with both characters on Normal or above
Sub tanks/e-tanks return as does one W tank (weapon energy/ammo - hidden at the HQ)
Contact damage (can stand on a few enemies however)
No pits outside of mission areas but still plenty of them overall
Static difficulty curve (doesn't dynamically change depending on the mission order picked)
Main bosses have fairly long invincibility times after taking damage unless using the right combos (combine them with the right elemental attacks and they go down super fast) or a somersault attack
Can no longer hit an enemy two times with a single jump slash by turning in mid-air
Model X and ZX don't have an overdrive function
Spikes insta-kill and you can't become immune to them here (normal or hard)
Can take off the suit to move around in human form but it's not used that well (lets you crawl to go into smaller spaces but doesn't let you shoot or wall jump/slide or dash - weird that you can't crawl with the suit on and makes moving around without it boring (a slide would've also been better than crawling - see MM3), can't talk to certain NPCs with the suit on - sometimes annoying since there are enemies in town areas and sometimes their reasons are a bit crap (gets pretty ridiculous during a certain rescue mission later on))
Have to switch to or use model hx/harpuia to see main bosses' weak points
Cyber-elves can't be used by the player here
Overpowered tornado charge attack (hx/harpuia; no invincibility time in-between hits) and sometimes overpowered somersault slash. With overdrive the tornado kills bosses in one hit!
Overdrive mode is canceled if you take a hit
Can't jump out of water in swim mode (lx/wind) - seems done so you'll use the ice platforms
Leviathan/model lx's spin attack and harpuia/model hx's ranged attack (happens at the end of a combo) are pretty weak - the former can't even take out the small fish in area J in two hits without overdrive
Some mini-games (sideways arkanoid-style - meh, bejeweled-lite - meh)
Model hx/harpuia is like a worse version of ZX for combat unless you use overdrive (slower and trickier to use combo, no somersault). FX/fefnir is also kinda weak unless you use overdrive or charge shots
No combos for the leviathan/lx suit+ice platforms disappear quickly and are hard to hit many enemies with efficiently so it's weak for combat besides when using the level 2 charge attack (have to gain a second suit part separately to gain these)
Kinda weak rewards for most of the optional side missions
Can't move while shooting as fefnir/fx nor aim diagonally
Phantom/px's alternate attack is the same as the main attack
No time limit for the fire rescue mission
Can't make a fefnir shot move diagonally (only in "stair steps" upwards)
Boss gauntlet in the final area - no health or ammo recharges in-between these (just some enemies in-between each pair that may or may not drop them though right before the final boss it's easier to grind for ammo and HP)