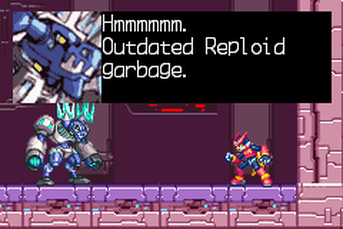 
*w/ elves, elements and upgraded gear
**w/ A rank on the final boss and phantom


+
Pretty intricate ranking system (time, enemies killed, damage taken, elves used, retries used)
New upgrades in the form of cyber elves (often one time use bonuses like in Rockman 8 FC but some have permanent effects such as increasing your lifebar, need to feed some of them to activate their abilites with crystals that you collect throughout the game)
Great art direction overall
Dual weapon system (map two weapons to their own buttons, you can charge one while using the other)
Fairly open mission structure (you can even continue the story after failing some missions)
Decent storytelling for the series, move while attacking with the sword (still need to stop to use a combo though), hidden items, save feature (three slots, save in-between stages), bosses have elemental affinities (you’ll find elemental symbols here and there which you can attach to your weapons to give your attacks added effects (like the lightning element stunning regular enemies etc.)), good variation (rescue and escort missions, sudden objective change during a mission, mechaniloid chase, bomb defusal, etc.), good bosses overall, elves that speed up crystal collecting (convenience upgrade and they could've just balanced the elf feeding better but still useful), unlockable hard mode, some nice effects (enemies split in two if you kill them with the z-blade), some alternate paths and shortcuts, some environmental effects (weather machine near the disposal center, sort of-quicksand, the mechaniloid going through buildings/walls, collapsing building in the retrieval mission), interconnected world, two new weapons (rod - attack in eight directions, shield boomerang - block projectiles), some difficulty scaling - most bosses change their behaviour a bit to make them harder if you're at a high rank (A or S) when encountering them, exploding traps also affect other enemies, some creative level/enemy design (train boss), reflect shots back at the enemy with the shield boomerang, bounce off enemies with the rod (only useful once or twice though), you can speed up the staff roll

+/-
Upgrade your weapons by using them on enemies (FF2, Ultima; can get tedious with later weapons since they don’t share experience)
Starts off pretty hard
Checkpoints before bosses
Health drops are pretty common (more common than crystals?) while 1-ups/continues are pretty rare
Skips the "boss health filling up" animation in favor of the warning sign from MMX4
Spikes (they still kill instantly) during boss fights, life refills before each mission, no ammo, can't ask Ciel about the locked door behind her or her history, can't shoot through walls (but you can melee attack through them, letting you reach some elves more easily), the ranking system is pretty forgiving when it comes to time but not so much when it comes to taking damage and and elves (not even permanent ones used outside of the mission (such as sub tanks - even if not used in the mission they cost you ten points) though you can use one use-elves outside of missions), boss rush (four bosses at a time), faster disappearing blocks segment than usual (and you can't wall jump on them), much fewer boss weaknesses (three elements - lightning, ice, fire; the good thing is that there's less trial & error in finding a boss's weakness but like in previous games they often go down too fast when exposed to it), shorter stages than in MMX1-3, mission briefings don't tell you about the boss you'll be facing (good in the sense that you'll be surprised, bad in that you can't plan ahead (not that you could really do so in previous MM games though)), limited lives (9), few mini-bosses (the final stages have several though), off screen enemy respawning (can be annoying due to the low res), sword combos tend to override bosses invincibility time after taking hits (can't keep going after the last swing in a combo though), you can sort of cheat the level design to reach some cyber elves (because after you open an elf container the freed elf will move towards you a bit), short pause whenever you pick up health (gives the game a classic MM feel but it can be distracting)

-
​Some slowdown
Can’t just hold dash to keep dash jumping (see MMX4)
Trial & error (leaps of faith - can’t look up/down, many fast flying enemies attacking from above or either side, boss patterns, the ranking system – using elves causes a penalty and the game keeps track of you ranking average without showing it to you (affecting your rank throughout the game so if you got C's or worse for a while and then an A then you might not get to rank A right away), mission briefings don't give you a hint about how difficult a mission will be, sloppy hit detection on some of the traps in the factory and on the search lights of the guards in the prison rescue mission (hidden base), can't see how long you have left to level up a weapon, need to be A or S rank to get into the room behind Ciel (her room; there's a cyber elf there but nothing else of interest), phantom's post death attack (at least he says that he's about to do it), some missable elves (for example there are temporary enemies in some missions that you need to kill 5 of to get an elf), no hints for some elf locations (would've been less tedious to find them all if the ranking screen or Ciel told you how many were left in that mission))
It takes too long to feed most of the cyber elves
Backtracking - can’t quickly teleport back to base when revisiting a beaten area (need to go to the teleporter)
No map
Plenty of dead space in and near the base, the escort mission in the desert (the soldier stops moving if you don’t keep him on screen and you can’t tell him to stop where he is when he’s about to move into a trap, some annoying enemies in the area that will likely damage him at least once, he also moves very slowly), the game is a bit vague about cyber elf uses and what kind of elf you’ve just picked up when you find a new one (it just says "found a cyber elf!!" and then you’ll have to go into the menu and remember how many you had in each category and what they did/what their names were – would’ve been better if the game told you the name and highlighted the new and unexamined elves in the menu), very small text message boxes while exploring/doing a mission that sometimes get in the way by staying on screen for too long, somewhat scratchy sfx (at least they got rid of the constant voices featured in some of the X games), "We seem to have no shortage of energy now" - then why can't I have some? (instead of having to go through the factory area for a meager one time only amount), several levels needed to raise some elves completely (which you need to do before use, can't reap a smaller reward from just one level for example), enemy drops bounce into the air before falling meaning you need to stop after every enemy to get the power up, you'll still get health drops when at full health (would've sped up crystal collecting considerably to only get crystals at that point), shots from off screen (rescue colton), can't revisit some mission areas (and the game doesn't tell you in advance which ones, so find any elves you can during the missions - desert, train; for the subway you need to find your way in there and find the teleporter after the rescue mission (with harpuia (the green flying boss)) since there was a soldier blocking your way when beginning the mission and another blocking the way to the subway (which is connected to the broken road leading to that boss) previously), need to unlock easy mode, can't quickly retry a stage after getting a bad ranking or review previous rankings, can't move backwards in the "duel in the desert" mission (would've been interesting to fight alongside the resistance army), sometimes sketchy background art, need to pause to change elements or weapons (they could've used the select button for one of them), enemy drop timers (until they disappear) continue while you're in a dialogue, can't charge your weapons during boss intros (need to start charging before the warning sign and even that doesn't work in the boss rush), repeats some enemies a lot and some mission areas a few times (just changing the layout or enemy assortment a bit), you don't get nearly enough crystals in a normal playthrough to raise all of your elves (with some grinding I could raise only one and a half of the big ones) - bosses and high rankings should've given crystal rewards, rescued reploids generally don't have much to say or any item to give you, can't use frozen enemies as platforms (it stuns them much like the thunder element - meh; the elements are generally underused considering the series history), the difficulty curve doesn't scale according to what upgrades you currently have, somewhat uneven difficulty (some easy bosses (elephant, pharaoh, pantheon aces, beetle; harpuia tends to get stuck in one pattern), some hard (phantom, blob/rainbow devil, train core/phantom/final boss when A ranked)), can't see how many crystals you've fed an elf with unless you use the teleporter (trans server), some repeated sections (revisiting old areas - new enemies and eventually different layouts further into the level though), odd choice of music for the bomb defusal mission, can't skip the dialogue before the final battle

​
Notes:
All elves larger than 1x1 square have a permanent effect