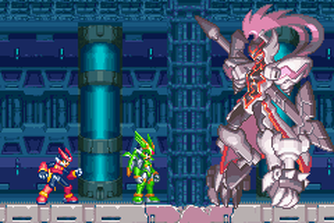 *w/ elves, elements and upgraded gear (vs sub tanks only)


+ Cyber-elf functions are now available anywhere using the pause menu and the categories have been changed (satellite - use as many times as you want and they can be turned on and off during a mission without affecting the rank in that mission, fusion - use once (some have a permanent effect while others don't), good variation, mini-bosses, some creative level design (moving blocks around to get to new places, some interesting boss arenas (hanumachine, sunken library boss), water level side mission, hoverboard segment, the crane segment in the energy facility, the interactive hammer swing traps (get to items by hitting them with the rod at one point), data room puzzle), hidden items, six save slots (save in the base), mission select shows boss names and portraits, some nice effects, a few alternate paths, you can get around the ranking issue by using an elf that puts you at rank A (so you can explore at your own pace and still get the toughest boss fights and the ex skills; can be used 5 times but you need to find them), some environmental effects (turn on the power in one stage with the lightning element, burn the vegetation in another), unlockable hard mode (no weapon upgrades or elves, enemy hits harder), bosses mock you if you lose against them, side objectives within missions (worth 20 points, can be pretty hard to pull off), easier to get an A rank (~85 if you have a high enough average from before?) except for early on when you don't have certain elves, new moves via the armor upgrades (double jump, auto charging, jump on water, dash though some enemies, no recoil/knockback (not quite; see below)), some EX skills are improved by also equipping the right elemental chip (trial & error, worth it as combo-ing certain skills after charged slashes and regular combos is extremely effective against bosses), hidden boss (phantom - pretty much the same as in MMZ1 except for one attack; he gives you the overpowered ultima boots - one catch with using them (or the slide through enemies upgrade alone) though is that you'll slide through health power ups (bug?))

+/- The secret disks collectibles (some hold cyber elves and crystals while others just tell you one sentence about an NPC or enemy (see MM&B) - kind of annoying as it creates one more step in the process of collecting elves/crystals), the resistance base is almost exactly the same, Chain Rod was changed to the Recoil Rod (charge up to push objects away from you or to perform super jumps or to bounce off enemies - kind of slow to use, can also stun some bosses when charged up), more spectacular intro stage battle (but the impact is dampened if you've played the previous games because of the low challenge of the Omega fight), proper e-tanks/sub tanks return (two of them, and you can still get a couple more via the elves), can't move while attacking with the rod, choose between four stages/bosses at a time (proper difficuly scaling or giving the option to access all of them but telling the player that the later four are harder would've been better), more frequent health drops, you get the double vitality elf later here (?), life refills before each mission, no ammo, can't ask NPCs about what you want, can't shoot through walls (but you can sometimes melee attack through them), somewhat easier to get S ranks than before, the game also judges you based on your average ranking throughout the adventure, getting a high rank means you have to rush through stages as well as know the patterns (this clashes with exploring for elves and tanks), off screen enemy respawning (really annoying in some parts), it's the rank you have when entering a stage (or before the boss if you use a boosting elf) that determines whether or not you'll get an ex skill in that mission (weird but you still need to play well to keep the rank for the next mission), sword or rod combos tend to override bosses invincibility time after taking hits (can't keep going after the last swing in a combo though), features a new elf that disarms deadly traps like spikes permanently, Cyberspace (not explained; makes the area green while affecting cyber elves and removes some enemies - basically an easy mode and it detracts five points from your rank), gain new moves (ex skills) from bosses by achieving a high enough rank in their missions (A or S - a bit counter intuitive since a bad player is more likely to need them) - making them use those skills during the fight, re-uses some bosses from MMZ1 (anubis/pharaoh, hanumachine/monkey, blizzak/ice bull - new patterns but only the monkey is noticeably harder, copy x's first form - same?), weapon levels system was changed for the most part (you can charge everything right away while the more advanced stuff is handled via elves and EX skills), no EX skill gained from anubis/pharaoh, harder bosses overall, some overpowered elves (especially as satellites since there's no penalty - double health and fast charge anyone? spike removal?), the forms/suits were replaced by upgrades for three different armor parts similar to MMX (helmet, body, boots; only one per part can be activated at once), can't buy or sell elves, might as well waste a whole credit if you lose a life if you're going for a high ranking (game seems to add up the time of both tries), no golems (robot worms sort of replace them), short pause whenever you pick up health (gives the game a classic MM feel but it can be distracting)

- More cartoony story (X2-3 level), the game world is split into stages (you can still revisit them though), can't fail missions and still continue the game this time, slower teleporting than in MMZ, makes no sense that you don't start out with powered up weapons and you should've been able to buy weapon upgrades for crystals so you don't have to grind to make the alternate weapons on par with the sword (at least you get all of them right after the intro stage), trial & error (unforgiving hit detection on some bosses and attacks (upwards stab), some missable elves in the base, getting detected by the cameras doesn't matter as long as you destroy them (so the stealth is pointless), the icons to the right of cyber elves and knowing what to upgrade, can't make preparations before the fifth mission (the missile), spikes kill from the side (usually obvious from the sprites but not always), can't see how long you have left to level up a weapon, shots from off screen, leaps of faith into spikes/pits/enemies, mission briefings don't give you a hint about how difficult a mission will be, boss patterns, the side mission in the water stage (pressing the buttons before the boss does), etc.), still need to grind a bit to be able to raise all the good cyber elves (the game tries to create more interesting challenges to get to large crystal containers but they don't give you quite enough crystals, level requirements are about the same as in MMZ2, two of the elves can help quite a bit though if used in the right places), still don't get to fight alongside the resistance army, no rewards from most mini-bosses, uneven difficulty (some difficulty spikes: old residential mini-boss and boss in deathtanz mantisk's stage, water stage mini-boss and side objective, cubit (energy facility boss)) and dips: beehive mini-boss and the baby elf fights, desert stage, water stage boss when the water level is lowered, fat plant/hoverboard stage boss, data room/biblio boss, omega's first form), can't dash jump off of ladders, can't keep dash jumping by holding down the button (like in MMX4), still need to raise some elves to their final levels before you can get any effect from them, you'll still get health drops when at full health (would've sped up crystal collecting considerably to only get crystals at that point), can't quickly retry a stage after getting a bad ranking or review previous rankings, also can't retry from the beginning after restarting from a checkpoint, need to pause to change elements and weapons (one of them could've been mapped to Select), can't charge your weapons during boss intros?, the difficulty curve doesn't scale according to what upgrades you currently have, can't speed up or change the position of "level up" messages (can get in the way of gameplay at times), somewhat scratchy sound, more dialogue (and it's usually not that great), can't stab upwards with the rod unless you've charged it first (breaks flow), disk drops can disappear if you move away too far?, mostly annoying boss voices (mantisk, water stage boss, etc.), some mini-bosses take too long to kill, need to pay again to revert a cyber elf to disposable/fusion form, some tedious parts (cameras if you don't want to be detected (which apparently doesn't matter) - same non-transparency search light effect but with less forgiving hit detection than in MMZ1 - five missions with cameras, the tile cannons in hanumachine's stage (frequent respawning despite you not moving away from their spawning point, annoying placements), can't raise your rank to A by getting 93+ points in three stages in a row (!) if your point average doesn't reach high enough (too unforgiving, makes you want to replay the previous stages or cheat with an elf), need to visit Cervau to analyze some disks (tedious), some cheap attacks (quick flying enemies, new anubis pattern, mantisk's melee attack after jumping down from the wall), sometimes lacking elf descriptions (Enethas - need to tap the button when blocking with the SB to get crystals, Lizetus and Cottus, Gambul - you still get stunned both on the ground and in mid-air), sometimes need to wait for an enemy to drop its loot after death, one of the quizzes in the base just gives you a vague info disk on the person giving you the quiz, some spelling and grammar mistakes, hard to get used to the ice physics (need to be at the peak of your dashing speed for the dash to affect your momentum at all - less ice in this game though and there are boots that negate the effect), some dead space (extra boss corridors AFTER mini-bosses, boss corridors between different mission segments, some rooms in the base remain empty throughout the game), Byse (double item drops) doesn't do that much despite leveling it up, no health bars on mini-bosses, minor slowdown, sometimes impossible to get 100%/20 side mission points in the data room puzzle due to there being two rows that look the same (and you can't map the entire room based on the directions), can't revisit the data room (for the crystals - the stage ends where you get the directions instead), rehashes a bunch of stuff from the prequels, the healing helmet chip (takes too long and why would you want to stand still?), the disks aren't dropped in order so you might think you've missed some of them when playing for the first time, can't skip the ending/credits and several in-game cutscenes (fairly lengthy dialogue before and in-between the final battles, can't make the final save before the credits)