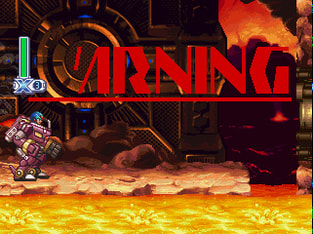 
+
Play as Zero (properly this time; different attacks (no ranged except for a limited smart bomb-like attack), somewhat different story, one different boss)
some cool new weapons and upgrades (charged alternate weapon attacks, skip on water surfaces, mid-air dash allows you to skip some tedious enemies)
mini-bosses
some large and detailed sprites
good bosses overall
all the usual moves (dash, charge beam, wall jump), good variation, hidden items (fewer than in X2 or X3 though), replay beaten stages (to search for items, can’t refight the maverick/robot master bosses this way), keep using X’s buster while having a special weapon equipped, you can now hold the dash button to keep doing longer jumps on the ground as well as on walls, battery save feature (finally!), better intro stage than in X3 (chase sequence, environmental effects), nice FMV cutscenes (the story is stupid and cheesy though), better weapon and upgrade explanations in text (but no visual demonstrations and Zero’s get weapon screen always looks the same), new upgrades (choose between plasma shot (level 4 shot that leaves a damaging orb) or quadruple charge shot (create stocks of four level 3 charge shots), a helm upgrade that gives you infinite ammo for uncharged special weapon attacks, an armor upgrade that gives you a strong air dash attack - kind of lame as it's one use per life (?) only and works just like the fire weapon in MMX1), some creative level design (cyber peacock’s and storm owl’s stages, split mushroom’s stage’s mini-boss), health bars on mini-bosses, ride mechs (works like in MMX1-2) and water scooters, control options (can be accessed in-game), improved icy ground physics, more satisfying and less annoying sfx overall, some unintentionally funny scenes, spikes no longer kill from the side, you can use a mech for one of the boss battles (Magma Dragoon - makes it too easy though)

+/-
Easier stages overall (enemies are generally pretty stupid compared to the ones in MMX3)
easier to find (but not to get to) most items
fewer health drops from enemies (but usually no need to search for most of the health placed in stages)
more straightforward stages overall and there’s few alternate paths
very forgiving hit detection when in the mech in Storm Owl's and Magma Dragoon’s stages
ammo refills after losing a life (previously after a continue?), features full health power ups, health refills after checkpoints (one per stage), one whole stage of scrolling water scooter segments (Jet Stingray - near autoscrolling except that you can speed it up by dashing), easy to farm lives and health in frost walrus's stage, EX tank (hold 4 extra lives instead of two after continuing - doesn't show up in the pause menu and isn't explained in game), features an ammo tank (however it's less useful here as the helmet upgrade makes uncharged special weapon attacks not cost any ammo), no damage from lava when in a mech, can't move while swinging the sword as Zero and there's a bit of movement delay after a swing (harder to attack in one direction then quickly turn around and attack in the other, harder to dodge after attacking), no armor upgrades for Zero (he gets air dash and double jump from beating bosses instead, along with sword techniques that don't cost ammo), Zero's fire attack is overpowered (his other attacks kind of suck for the most part), shorter finale and the game doesn't make you use many of your special weapons to progress, no hidden or alternate bosses, the save file info shows when you're at 100% items (but should've been accessible at any time, not just when saving or loading), no escape sequence, another change in style for the music (more electronic/techno oriented), no clues as to what weapon to use for some obstacles (wall tiles in magma dragoon’s stage), off screen enemy respawning, can't dash jump off of ladders, fewer mech types than in X3, air dash control takes some getting used to (works immediately after pressing jump, uses double tap like the normal dash), bosses are generally too easy when using the correct weapon against them (some of the weapons even block their attacks), can't switch weapons while a shot is still in effect/on screen (unless you use the pause menu - they might as well have let you do it while removing the shot instead to make things smoother), still need to manually fill up newly collected sub tanks, small delay on movement when picking up health, life and tank limits (9 lives, 2 e-tanks, 1 ammo tank), some movement delays (when turning during movement, before/between dashes (except when jumping), after a charged shot or Zero’s giga attack (annoying)), X gets air hover in addition to air dash (slow and can get in the way but it’s useful against some bosses), some pre-rendered elements in the backgrounds (usually works pretty well)

-
Can't turn off double tap dashing or the hover move
some trial & error (loose downward scrolling in frost walrus's stage (can't look up/down), boss patterns, storm owl teleporting from one side of the screen to the other when off screen and how his homing projectiles will place themselves before firing, figuring out how to dodge cyber peacock’s projectiles, parts of the water scooter segments, leap of faith into a pit in the general's stage)
repeats enemies here and there
silly story with plenty of dialogue to skip (all stage bosses say something now)
no difficulty options
​sometimes sloppy hit detection (when in a mech, the general, the purple Sigma robot), shooting a charged shot while on a ladder and holding left/right will still make you jump in that direction, shot charging now resets if you switch to or between special weapons, frequent and repetitive in-game voices for many actions (X sounds like a pre-teen boy and says "time to get serious" every time your HP reaches yellow; Zero goes "hooh! hah! haww!" every time you perform a sword combo), longer boss intros (warning text before each intro, they all talk), slower screen transitions, some tedious enemies (spider web, flying shielded enemy), no boss names on the stage select screen, uneven difficulty (fairly easy but drawn out battles with the general and the colonel (the second time around) as X, storm owl/split mushroom/magma dragoon are harder than average, jet stingray/frost walrus/reaper sigma are fairly easy, Iris (Zero) is harder than Double (X)), stored charge shots (arm upgrade) don't carry over between screens or even when switching between special weapons (the cooldown time on bosses also makes it kind of situational in use), lack of environmental effects (except for the intro stage, frost walrus's stage and one part of split mushroom's stage), can't switch between arm upgrades (plasma shot/charge shot stock) in-game (need to revisit storm owl's stage), the difficulty curve still doesn't scale according to what upgrades and weapons you have collected (it's the next generation Crapcom!), your avatar falls into the lava if you're over it after winning against magma dragoon (doesn't hurt but it looks stupid), can't map X's special weapon to its own button like Zero's (so you can have the special on for example the l button and the normal attack on square), loading screen before the staff roll, Zero's scenario feels like an afterthought in some ways ('ultimate giga attack' gained from a regular robot master/maverick, some parts are a lot harder as him (at least without the right weapon), capsule rooms are empty), some dead space (more as Zero), slower ladder climbing (there aren’t many ladders though), the game doesn’t show you what items are left to get in each stage on the stage select screen (and there’s no radar upgrade)