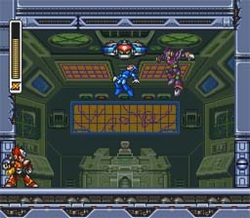 +/- Double tap to slide as alternate mapping (can't turn it off), a couple of extra bosses will appear randomly after half the game (creates dead space in the shape of empty boss rooms), change in style for the music (hard rock/grunge), can't grind for health, long password save, no clues as to what weapon to use for some obstacles (cracked wall, hanging boulder), enemies respawn instantly when moving away from their positions, overpowered (optional) double charge shot, somewhat longer levels, can't dash jump off of ladders, convenience upgrades (item radar helmet), you now need an upgrade to use mechs, air dash control takes some getting used to (it works immediately after pressing jump, some delay when dashing upwards)

- Repeats enemies a lot, some dead space, some tedious parts (elevators, tedious/poorly placed enemies which require you to stop moving - breaks flow), very overpowered (optional) sword upgrade (take down bosses in two (!) hits), silly story (plenty of dialogue), some generic enemy designs and music tracks, somewhat uneven difficulty (some mini-bosses are surprisingly tough while some suck (Doppler stage 1 especially)), some bosses are way too easy when using the correct weapon against them (crush crawfish, weapons even block their attacks), so-so instrument quality for most of the music, no difficulty options, "I'll handle this, Zero" (you can't use Zero on bosses, the game even switches when there's an empty mid-boss room), crate transport sequence (lost potential), sometimes sloppy hit detection (on volt catfish and the red henchman boss (Byte)), pointless elevator sequences, some trial & error (a couple of leaps of faith into spikes, boulder trap, fast moving snow mobiles, boss patterns), can't switch weapons while a shot is still in effect (unless you use the pause menu, so they might as well have let you do it while removing the shot instead to make things smoother), weird physics on ice stage, boss names aren't shown on the level select screen, tedious climbing segments in final stages, can't turn off the double charge shot (messes with your timing and is a hindrance in some of the final stages), some slowdown (Bee boss, Sigma's second form), some cheap hits (Sigma Virus chase), Zero steals the spotlight in the finale

Notes:
- The large boss in the intro level sometimes bugs out, making it very easy
- Nice FMV scenes in PS1 version
- Physics bug in the toxic seahorse stage makes it possible to float up in front of the underwater fans using the charged ice weapon


Comment:
This one is kind of messy and tedious for the most part. The double charge shot was a shitty idea as it works against you more than for you and can't be turned off (?), so I'd advice against getting it. What bothers me more though is how Zero chickens out of boss fights when you want him there, yet he gets to save X's ass twice throughout the game, effectively stealing the spotlight. Dick. Later on they gave him 4 pretty good games for the GBA while letting the X series turn to shit. Dicks.