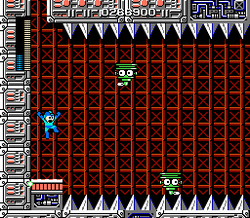 +
Origin of the boss/ability system (gain a modified version of each boss's attack after beating it)
good variation
good character design
you can replay beaten levels (only reason is to rack up lives and to get the platform item though)
makes you use nearly all of your earned abilites to get through its levels
some good bosses (yellow devil, ice man, guts man, elec man), some special weapons affect the environment (freeze fire pillars, throw boulders), create platforms in mid-air

+/-
Bosses take less hits from the regular buster than in later games (makes less of a difference to have the right weapon)
can't walk on spikes during invincibility time (added in later games)
unlimited continues
no E-tanks
the platform creating item is a bit overpowered
enemies respawn off screen, point items (kind of meaningless when the game doesn’t have a high score table), enemy drops disappear after a few seconds, fairly long knockback, elec man’s weapon also destroys the large blocks that you can throw using guts man’s weapon

-
Trial & error (forced backtracking, you need to save certain weapons for unknown occasions or you are screwed, boss patterns (especially fire man), bosses’ projectiles still do damage after they die, spike traps when jumping down to the next screen)
slowdown and flicker
some control issues (slight delay before you start moving and mega man floats a bit after releasing the button, very picky hit detection when jumping past the bottom of a ledge, very fast fall speed when moving off a ledge)
no difficulty options
no password save
​you can't pause if any of your bullets are on screen, pausing while on a ladder makes you lose your grip, some sloppy hit detection (the moving platform enemies – sometimes you’ll fall right through them, other bigger sprites, spikes), power ups from enemies disappear if they bounce over the top of the screen, uneven difficulty (guts man and ice man stages are harder than average, fire man is pretty cheap (spams projectiles and the pattern is hard to read), the yellow devil and the clone are quite tough, bomb man and cut man are easy), most bosses only have one pattern, fairly easy final boss (with the right weapons)