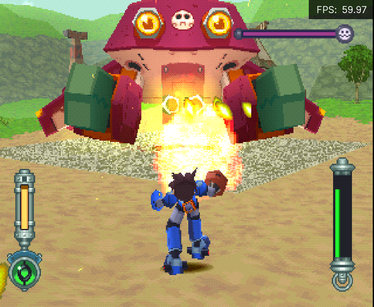 +/-
Mostly linear structure (can take the digger license tests when you want to, can explore one optional dungeon per island after the first two areas (three of them in total) before or after continuing the main quest, adds a hub map where you can move around in the airship (but not interact in any other way?) and select locations to go to - like Space Hunter, some very straightforward areas like when you first get to the forbidden island, another optional dungeon on Nino island which can be fully explored after getting the drill, partially non-linear desert city mission and ice dungeon)
Save points at your current homebase (shows current location and time taken, 5 slots per card) and certain town houses+in some hostile areas via Data the monkey. He can also heal and recharge you
Can still manually shoot faster than the buster auto-fire (which is a bit slow until you get the best rapid fire upgrades - only the last one seems faster than using this trick) by tapping forward and fire at the same time
Enemy drops disappear after about 5 seconds - way too quick when underwater and often too quick above as well (made worse in that you can only carry one sub/special weapon or tool besides lift at a time)
Enemies encountered in the overworld tend to run away quickly and the encounter ends quickly if you run away from them
Pretty lighthearted and sometimes comedic tone with mostly cartoonish villains
Can lock onto enemies through walls
Bosses can kill you quite quickly with certain attacks
Can attack NPCs and shooting or lifting Roll or the ship a lot has an effect on story and gameplay (nothing happens if you kick human NPCs, can also knock away animals and the small lego-like pirate bots but not kill them)
Optional quiz mini-game (random pop culture and history questions rather than MML related+some questions are repeated for the four different rounds) - no other mini-games here
Status attacks and a healing item for them (medicine bottle) - some can be annoying like the one that makes you unable to attack or electrocution which makes you move really slowly (can defend against the latter with the hover boots though)
Mega Man is kind of a wimp story-wise
Don't get to keep any gear from the first game
Dungeon enemies generally respawn when re-entering the floor they were on (in some rooms there are frequently respawning smaller ones and in others there are smaller ones that respawn when re-entering the room they were in)
Partial nudity at one point
Cool how you can remove shields with homing missiles however those enemies become too easy when you do
Other enemies don't get damaged by the slow flying explosive enemies
Water level altering in one dungeon (however you don't get to see the water going up or down)
No HP refill after bosses
The main dungeons don't end up connecting to each other here
Can't move while using the fire extinguisher/aquablaster
Basic crafting of special weapons and some other items (combine two items - Roll does it for you so there's no customization here)
Can't manually jump while using the jet skates (you jump via hills in the ground (only seems to appear outside of dungeons) or when skating off a ledge) - ledge jumping is still useful in some spots
Only two slots for attaching upgrades/buster parts for the buster/main gun at first - can be increased to 3 with the adapter plug item (only one of these can be made)
Less detailed maps for non-dungeon areas - get the mini-map and a zoomed out one of the current area though
No message log (generally not needed thanks to Data), cutscenes all use in-game/in-engine graphics, revisit the first area to progress at one point+the southeastern island at one point (no other backtracking to previous areas to progress), very little mandatory ability gating? (fire extinguisher/aquablaster for the first mission, lifter but it's a default ability, skate jumping helps with some platforming), jumping is slightly faster than running, can skate or jump past a lot of enemies (but you generally don't want to since items are expensive), boss rush before the final one (the 4 main dungeon ones only), some overpowered special weapons/sub weapons (shining laser, ground crawler, homing missile), the master (the blonde white woman) is voiced by a black guy and mega man is voiced by a woman - apparently the former is controlling someone else's body like Yuna is also doing, can't move while shooting the shining laser, can't move backwards while shooting - can move sideways and forward (there's also no backwards dash/roll), no buster charge shot and no wall jump (MM/MMX)

​
Notes:
-Use the non-HW core in retroarch to avoid graphical issues while underwater
-Overly large deadzone (retroarch issue?) - makes it so you're likely to stop briefly almost every time you change direction
-Farm money at manda island optional ruins w/ vacuum (golden bird, check when entering for when you can't lock onto an enemy upon entry - means you'll find it); alternate: reaverbots in one particular room in elysium?