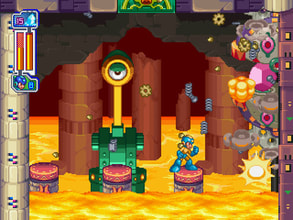 
​
+
Great variation
good bosses overall (not Astro Man (when he spams astro crush or when you use the right weapon) or Frost Man)
hidden items
mixes platforming with shooter and snowboard stages
save after each level
bonus mode, better gfx overall than on PS1 (only missing some transparencies), some innovative level design (Clown Man and Grenade Man stages), special weapon now on a separate button (so you can keep using the standard shot – charged shots reset when you switch though), switch between special weapons on the fly (with l/r like in MM7), alternate main weapons (laser and arrow shot – can be turned off), configurable controls, nice anime-style fmv cutscenes (the story sucks though), replay beaten levels (except for the robot master encounters), good animation, some alternate paths, cut man and wood man cameos (easier than in their original games), bounce on the mega ball to reach higher (you can keep bouncing for as long as the ammo lasts, not explained by the game though and it’s almost redundant after you get the tornado weapon), introduces proper swimming (you could float in MM7), ammo drops won’t be collected unless a special weapon or the energy balancer is equipped, the staff roll shows fan contributions to the boss designs and there’s an unlockable menu with more official and fan-made art as well as a sound test

+/-
Some of the VA is pretty funny (so bad it’s good – Wily, Grenade Man) but most of it is annoying and the in-game voices can’t be turned off
very cutesy art design overall
no wall jumps
buy items in a shop (mostly for convenience and making the game easier, makes collecting the bolts more meaningful though)
very little knockback from enemy hits
​a lot of 1-up drops but few HP drops, mega ball weapon (situational), life refills after mini-bosses, limited bolts (can’t buy everything), only four robot master stages available at first (better difficulty scaling but less freedom), slight movement delay after sliding, getting to bolts is often a matter of having the right weapon/item instead of skill, the bosses are generally harder than their levels (except for grenade man/tengu man/frost man), off screen enemy respawning, ammo refills after losing a life, continuing now spawns you at the beginning of the second half of a stage (right after the mini-boss) instead of the beginning, can't shoot while sliding, forgiving hit detection overall (especially near platform edges, one exception is when using the mega ball against one of the fortress bosses), easier Wily battle (at least with the arrow shot) – using the invincibility time from the astro crush makes it very easy, arrow shot is overpowered (can be turned off), you can only have 9 lives (additional collected lives are wasted), dialogue scenes can be sped up but not skipped entirely, the energy tank was replaced by Rush flying over your head and dropping health/ammo randomly (less reliable and doesn’t work in some of the boss corridors but can be used once per stage at no cost),

-
Clown Man (what are you doing to me MM8? Fun fight though)
mega man talks like an 8 year old kid (and the rest of the cast is not much better, there's even some engrish by the actors: "I'll take on you!")
pretty slow walking and sliding speed (enemies tend to move as fast as in the previous game)
jumps are too vertical and are not affected by sliding (see Contra)
trial & error (snowboard parts, bubble and windy segments on Tengu man’s level, maze in Clown Man’s and Astro Man’s levels, falling boulder in Grenade Man’s level, first RJ segment in Wily's fortress, some unnecessary points of no return, can't see if there are bolts left in a beaten level (MM6))
​the first shooter/RJ segment gets too cluttered with all the helpers and MM is a big target for that kind of gameplay, some very minor slowdown (tons of sprites on screen at times), rehashed ideas and enemies, many music tracks are too ambient/laid back for a mega man game, some crappy power ups (climb faster, no knockback (already shorter), exit a finished level at any time (should’ve been free), auto shoot, rapid, spare charger?), mazes in a mega man game? (clown man (short though) and astro man (longer)), slower screen transitions and boss intros (unskippable), get weapon screen is unskippable and uses dated pre-rendered graphics, more pre-rendered graphics for Wily’s castle screen, some trial & error in figuring out what the rush powers do – no in-game explanations available, sometimes poor special item explanations, control over the charge shot is maintained during in-game cutscenes so you have to hold the button down and time the shot manually at the beginning of boss fights, no difficulty options, no mid-boss/mini-boss health bars (makes it harder to tell if a special weapon is effective), can't sell special items/parts, riding the snowboard is tedious in some parts until you learn them (because you end up too close to the edge of the screen to react, the controls aren’t perfectly responsive on some of the platforms and you can’t slow down), tedious green devil battle (slow 'forming' animation and long invincibility times), easier Bass battle, repeats the boss intros for the boss rush, slightly scratchy sfx overall, the grenade man ‘puzzle’ where you need the flame sword would’ve been more interesting if you instead had to lure an enemy from the right to get to the bolt, no usage demonstration during the ‘’get weapon’’ cutscenes

​
Notes:
-PS1 version lets you map two buttons to jump, making it a bit easier to use the special weapon while jumping around (unless you map jump to l/r on SAT)