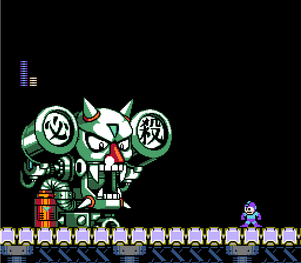 
​
+
Good bosses overall
good variation
hidden items
new Rush abilities
somewhat comical (see the in-game intro)
choose your path, mini-bosses, fast weapon switching (a/s here), good animation, some new ideas (chase scenes, environmental effects from some weapons (turning on the machines in the junk man area with the thunder shot, burning down a tree in slash man’s area to find Beat with the scorching wheel, changing the weather in cloud man’s stage, freezing lava in junk man’s stage), shop system (press select to access it (not entirely obvious), collect bolts to buy items – e-tank, ammo tank, Beat the bird (gets you out of pits), etc.), challenging Wily fight (easier but kind of tedious using the right weapons – spring then thunder right after), taking hits doesn’t cancel the charge shot, some interesting secrets
Compared to the SNES game: Faster movement and zoomed out view, shows which stages you’ve gotten a letter in (MM6-style), re-inserts the pre-stage text messages (need a patch for the SNES version), tighter upward scrolling, more satisfying and dynamic sfx and instrumentation overall, can’t hit the flying shielded enemies from the front with the junk shield (makes more sense), no/much less slowdown, better ‘’get weapon’’ artwork and improved art direction for some areas (less cramped, less ‘’fluffy’’), the more pronounced effects on bosses when you hit them with the weapon they’re weak to were removed (looks worse but makes battles slightly faster and more intense, the bosses also don’t get locked in one pattern when you use their weakness against them)

+/-
Enemies drop ammo/health even if you’re fully charged (could’ve changed depending on what you needed at the moment)
introduces more characters (Bass & Treble – rival bounty hunter and his dog)
orgiving hit detection around the edges of platforms (mega man can stand on less than one foot)
limited inventory (4 E tanks, 4 W, 1 S, 9 1-Ups)
ammo refill after Wily stages
smooth vertical scrolling?, junk shield and thunder bolt/strike are a bit overpowered, overall the robot master stages are a bit easier than average, weaker charged shots (only worth two normal shots meaning it becomes a bit more situational in use), password save feature (pretty long unfortunately), sniper joe (green guy with a shield) is easier than in previous games
Compared to the SNES game: No Auto, no in-game cutscenes (unskippable?)?, choose between all eight stages from the start, longer knockback (like in the NES games), Rush no longer takes damage from enemies, giant bolt (spring man’s stage) was replaced by the energy balancer, Beat works like in MM5 (helps you attack instead of helping you get out of pits), can’t access the regular stages in-between Wily stages, the hit detection when standing on the edge of the end of a ladder is consistent with other platform edges here (it’s less forgiving than normal platform edges on SNES), the default trajectory of the spring weapon is different here (takes some getting used to),

-
Rehashes a lot of previous ideas
having to press down to slide (should’ve been done like in the X games)
no difficulty options
no battery save feature
trial & error (boss patterns, water physics, figuring out some of the alternate special weapon uses, the junk shield doesn’t protect against slash man’s eggs, guts man 2, etc.)
​some difficulty spikes (turbo man’s stage (hard to tell if you’re damaging the truck, easy to take damage in several segments, quick-man like segment), freeze man fight, wily 1’s moving platforms and wily 2’s turtle boss), some so-so bosses (spring man, shade man), some overly resilient enemies, the scorching wheel and the spring weapon are pretty clunky to use, somewhat longer boss intros than in older games, several attacks keep the player from moving for a few seconds (the engulfment one is especially annoying), you get the proto shield (by finding proto man in three stages, finishing with shade man, then fighting him) too late for it to really be useful, the alternate path in junk man’s stage could’ve been more interesting with a time limit on the frozen lava, the game puts the jet suit transformation animation in-game so you can’t skip it anymore, unskippable get weapon and wily’s castle map cutscenes, your charge shot is cancelled during the intro to the second Bass fight
Compared to the SNES game: No intro stage, no robot museum stage, no full screen (!), no weapon explanations by Dr. Light (instead an animation is shown during the get weapon cutscene), no shop system (so no bolts; energy balancer replaces the giant bolt), no Rush Search (should’ve been improved instead of removed), Game reset on R (easy to hit by accident since it triggers even when outside of the program), overly quiet music compared to most of the sfx, the password doesn’t save your e-tanks (except for the secret one you get after clearing the game which it starts you at the last stage)

Stage by stage comparison:
Junk Man’s stage:
+ Somewhat more aggressive cockroaches and nests,
-  More tedious enemy/ladder placement in the other lift segment (where you activate the lift with thunder), junk man is somewhat easier (no speed adjustment to make up for the smaller sprites), slower stream of flying helmet enemies in the elevators, easier to take the upper path in the beginning (but there’s no large bolt there now so what’s the point?),

Freeze Man’s stage:
+ Somewhat harder to dodge the sleds, exit item now placed in the middle of the stage (replacing rush search)
+/- Harder boss fight (didn’t need to be harder)
- Easier platforming in the room with the letter, a bit more dead space thanks to the zoomed out view, slightly easier third snow bear fight,

Cloud Man’s stage:
+ Somewhat harder platforming right before the checkpoint, somewhat faster pit enemies
+/- Harder boss fight overall (a bit more aggressive and the wind effect is the opposite of the animation shown so it’s easy to accidentally jump towards the pit – the latter is obviously a bad thing, however the lightning attack from above is easier to dodge)
- Invisible platform above the screen in the aforementioned platforming segment before the checkpoint (you’ll probably lose a life here since there’s no ground below)

Burst Man’s stage:
+ Faster timer on bomb platforms, somewhat harder boss (somewhat faster bubbles that bounce the player around and bubble platforms that float the player upward, harder to dodge the danger wrap bubbles)
+/- MM falls a bit further when jumping into water (makes some parts harder such as the long jump after the mini-boss) however the physics are the same if you simply fall into the water
- The mini-boss is still too easy (just spam junk shield)

Spring Man’s stage:
+ Slightly faster spring enemies?
+/- Easier to get to the hidden room, slightly faster bouncing
- The boss is as easy as before, shots from off screen by one of the turrets early in the stage (doesn’t seem to happen with turrets in the wily stages), the e-tank room still has redundant spinning boxes (just use rush coil or the jet suit), still can’t activate the jet suit while on springs or one of the spinning boxes, the spinning boxes weren’t sped up,

Shade Man’s stage:
+ Somewhat harder zombie elevator segment
+/- The boss is a bit harder to hit while flying and his attack is faster (he also drains more health) but his projectiles are a bit slower when on the ground,
- EB replaced by a 1-up in the room before from Eddy, the boring enemies weren’t improved (the knight helmets and rolling knights, some odd color choices and more noticeably sparse backgrounds than in other stages, somewhat different shot pattern by the mini-boss which is a bit easier to dodge, a little bit more dead space (the room before the boss corridor lacks the Bass encounter so it’s empty)

Turbo Man’s stage:
+ The boss moves a bit faster and it’s harder to avoid his car form
+/- Smooth scrolling during the quick man-like segment (somewhat easier as well), somewhat easier truck mini-boss
- No PU fist at the stop lights (1-up gift by Eddie in the next room instead), can’t see proto man here if you beat shade man’s stage beforehand (even if you took the non-proto man path in that stage (this sucks)), no visual clue for the hidden path to proto man,

Slash Man’s stage:
+ Somewhat more resilient stegosauruses, harder platforming segment at the second stegosaurus
+/- You can still just use RJ to get the e-tank instead of riding the dinosaur correctly, the boss fight is pretty much the same
- The T-Rex is still too weak against junk shield, easier dino riding segment, no snakes in the forest and it’s still too easy with the junk shield, the enemies right before the boss are still too easy

Wily 2:
+/- Easier second bass fight with a simplified room (the segment before him is still very easy), harder (faster, harder to slide under) turtle boss
- Somewhat harder fire pillar platforming segment (the long one; easy with the jet suit though), invisible roof in the conveyor belt platforms + wall springs room (it’s there in the SNES game, but the different layout here actually makes it a problem), much easier to get the items in the second fire pillar room,