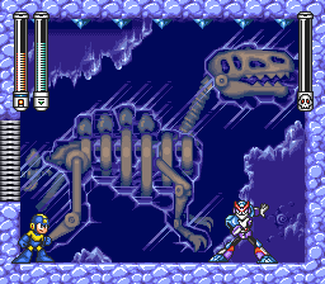 +/-
Activating Rush doesn’t change Mega Man’s color
enemies drop ammo/health even if you’re fully charged (could’ve changed depending on what you needed at the moment)
longer in-game cutscenes (unskippable?)
introduces more characters (Bass & Treble – rival bounty hunter, Auto - shopkeeper)
now you can only choose between four robot master stages at a time (perhaps to make the difficulty scale better but it would’ve been better to make it optional via difficulty options)
somewhat warmer color palette than in the NES games, forgiving hit detection around the edges of platforms (mega man can stand on less than one foot), much shorter knockback from enemy hits, limited inventory, ammo refill after Wily stages, smooth vertical scrolling (however it’s too loose when going upwards), junk shield and thunder bolt are a bit overpowered (you can hit shielded flying enemies from the front with JS), overall the robot master stages are a bit easier than average, weaker charged shots (only worth two normal shots meaning it becomes a bit more situational in use), the hit detection when standing on the edge of the end of a ladder is inconsistent with regular platform edges, Rush can now take damage (could possibly be used as a shield in some situations but it also cancels the move for example if you’re trying to use the coil),

-
Rehashes a lot of previous ideas
having to press down to slide (should’ve been done like in the X games)
no difficulty options
overly long passwords
slower movement speed
​visuals are too zoomed in, so-so sfx and weak instrumentation at times (tinny/cheap reverb), some issues with the tide water segments (loose upward scrolling, can’t go down to grab enemy drops from the bottom when the water levels are raised), trial & error (boss patterns, water physics, figuring out some of the alternate special weapon uses, the junk shield doesn’t protect against slash man’s eggs, guts man 2, etc.), some difficulty spikes (turbo man’s stage (hard to tell if you’re damaging the truck here)), some so-so bosses (burst man, spring man, shade man), rush search is painfully slow to use (more likely to give 1-ups than large health containers, slowly falls asleep (!) if you put him too close to a wall), some overly resilient enemies, the scorching wheel and the spring weapon are pretty clunky to use, longer boss intros, several attacks keep the player from moving for a few seconds (the engulfment one is especially annoying though you can shorten it by mashing the buttons), underdeveloped and short robot museum stage, you get the proto shield (by finding proto man in three stages, finishing with shade man, then fighting him) too late for it to really be useful, generic art direction at times (most backgrounds), some slowdown (junk man’s and freeze man’s stages), the alternate path in junk man’s stage could’ve been more interesting with a time limit on the frozen lava, the game puts the jet suit transformation animation in-game so you can’t skip it any more